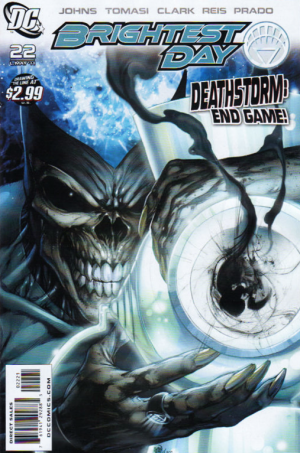 When Blackest Night ended with the resurrection of a troupe of DC’s secondary characters, I think most people were able to see Geoff Johns’ plan. He started with Green Lantern, and then moved on to the Flash. Brightest Day is his attempt to get the rest of his group sorted. Issue #22 is the third to last issue of the series, and unlike 52 (which was a phenomenal read), I’m glad to see all the stories converging for a pretty epic climax.

So if you’ve been reading Brightest Day, #22 is a lot more of the same, but whereas Firestorm was the least interesting character in the whole epic (in my humble opinion), he really shines in this issue. Ronnie and Jason have been struggling while sharing the Firestorm matrix, so it was nice to see a bit more maturity injected into the character. I won’t spoil anything – thought I really don’t think readers will be surprised by the climax of the issue – but Johns throws a nice curve at the reader, even while using one of the most stereotyped actions in comic history: jumping in the way of some deadly object while screaming “NO!”

I’ve been happy with Brightest Day. It’s not the greatest series, but it’s engaging. And it’s accomplishing its purpose. Aquaman, Hawkman and Hawkgirl, and even Deadman are all relevant again. Johns is resurrecting the silver age of comic heroes, but by using the deep and interwoven (and oftentimes convoluted) mythos of the DC Universe. And with Geoff Johns as the Creative Editor over at DC, Brightest Day is the series to be reading if you want to be on the ground floor for DC’s next era. 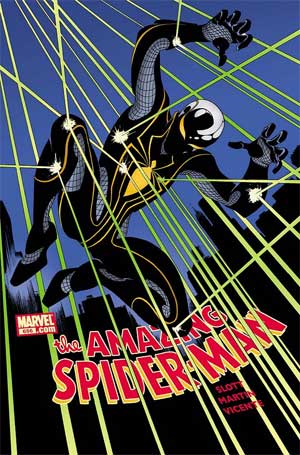 I normally love Dan Slott’s work on Spider-Man, but this feels, well, too contrived. I can stand a contriver now and then, but this time, there’s too much Deus Ex Machina present. And I love a good suit change now and then, but as a writer and an artist, why bother with the slow reveal when the new suit is pasted across the cover of the comic? That ruins the effect. Anyway, we’re back to status quo (somewhat). Jonah and Spidey are at it again – this time because the mayor wants death and Peter can’t let anyone – villains included – die. If anything, I’d like to see an issue where Spidey starts ripping villains heads off. He can make a new suit that will help him do it. I’m disappointed with the turn this series is starting to take. Sure we’ll get a slew of new costumes, but at the expense of strong story telling. Now that Peter works in a lab full of great machines to help him be a better Spider-Man, we’ll never be at a loss for that one perfect gadget. But gadgetry doesn’t make Spider-Man an interesting read, and unfortunately, that’s what we have to look forward to. 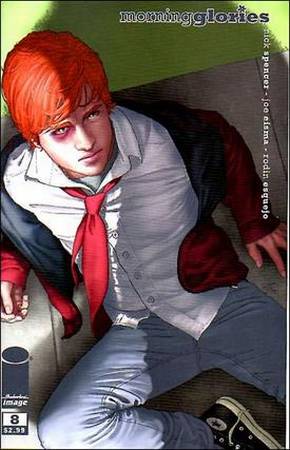 I feel like when I read an issue of Morning Glories, I take one step forward and then two back. To me, this series is very reminiscent of the first season of Lost. You’d find out a bit about the characters, but some event would raise a bigger question about the overall arc of the series. Morning Glories has the same feel to it, but I trust Nick Spencer to know where it’s headed.

The depth of story telling here is mystifying. As with each issue, Spencer centers the story around one character. This time, it’s Hunter, the one person who is probably the most genuine of all the students attending Morning Glory Academy. Hunter has a problem – and it echoes Hurley’s problem on Lost. There’s a set of numbers that keep appearing, and much like Hurely’s numbers, they pose an issue for Hunter. Spencer and Eisma seem to realize this correlation because there is one panel that hearkens – directly – back to Lost. Show followers will get it immediately, and it feels tongue-in-cheek, like Nick Spencer knows he’s screwing with his readers. And this is why I’m all the more hooked to Morning Glories. If you’re not reading this series, you should be. The trade just came out, and you’d only be one arc behind. Go – right now – and get a copy of it. I doubt you’ll be disappointed.

Every week Brian Bannen scours the comic stores for the very best of the over-saturated comic book industry to find the gems for you, follow him @Oaser.