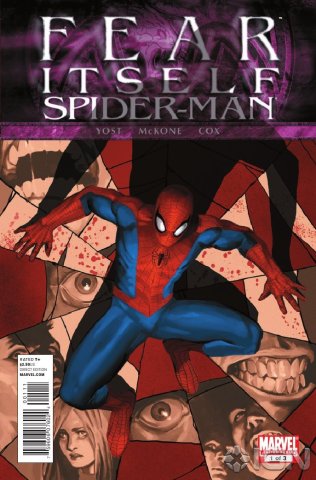 If Fear Itself is basically the Marvel Universe swamped by Scarecrow’s fear gas, count me out. With Civil War, Spider-Man revealed his true identity to the world. There was a reason to read the Civil War tie ins – new costume, new life in Avengers Tower, complete submission to the federal government. But this issue is a real stinker, not because it’s poorly written, but because it doesn’t do a good job of selling Fear Itself. So people in New York are scared, and attacking each other? Yeah, I call that Monday.

Spider-Man’s being shot at by cops? Nothing new. When I think of Spider-Man’s ultimate fears, I think they involve Mary Jane or Aunt May. Spider-Man isn’t even affected by the fear. Instead, he’s trying to help people over come it. Maybe I’m just jaded because I expected so much out of this issue. But if Marvel’s going to have weak tie-ins like this, I’d advise readers to avoid them. Save the money for something you really want to read. 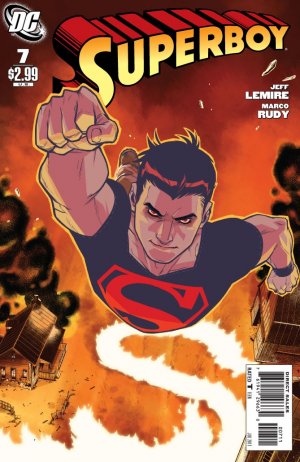 I’d like to see Connor Kent do more than fight aliens with his mind. This is the second time I’ve encountered the Black Mercy plant, a parasitic flower, which gives its victims a glimpse of their greatest desires.

Not much happened in this book as its reveal at the end shows the story was meant as exposition for a greater story. This was okay, but, I’d really like to see more of Connor destroying aliens and hurtling his nemeses into space. I enjoyed the story, but much of what happened in this comic could have been explained or depicted on a few pages.

The final page is enough to salvage the issue, but for the most part, this wasn’t a very good comic. I love Jeff Lemire’s Sweet Tooth series, but since this is an ongoing issue (and was planned to be immediately), Lemire doesn’t have to do much to prove the character. Superboy is already established. Lemire gets to play with him in the sandbox. So giving an issue of expository filler in order to set up a bigger arc seems like waste of time, especially considering what happened in the majority of the issue (which is full of flashbacks showing Connor defeating the superheroes on Earth). Lermire is a much better writer than this. I hope he gives the readers better stories than this because if these issues continue on a path like this, I think readers will be quick to turn away from one more Superman title. 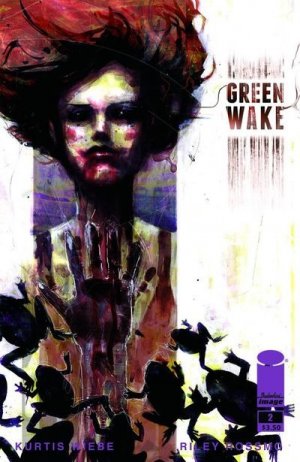 Reading Green Wake is like watching a David Lynch movie – I have no idea what the hell is going on, but I’m beyond intrigued. Kurtis Wiebe is trying, desperately, to keep readers in tune with what’s happening in the story. He has occasional lapses of perspective (one such incident ends with a cool fist fight, but it had a sloppy introduction), and this hinders the reading of a generally abstract comic. I like Green Wake for its intriguing plot, specifically the mysterious frog people that inhabit the town, but it needs to do more than just hint at what’s below the surface.

But plot doesn’t seem to be the driving force behind Green Wake. Kurtis Wiebe’s characters are engaging as they each have their own mysteries to reveal, and we keep getting hints of some darker aspects of their lives before the frog town. And while the issue ends with a cliffhanger, it’s much more confusing than the traditional cliffhanger.

I’d be upset if Green Wake hadn’t set itself up as anything but a traditional comic. As much as I’m frustrated by the pacing of the story, it’s moving along at a decent speed. We’re getting more answers, and I’m sure we’re going to get a big reveal in the third issue (as it’s the centerpiece of the five-part series), but I want some explanations. Lost has jaded me on stories that hinge on an epic mystery because if it isn’t explained, Kurtis Wiebe is going to find himself with some very irate fans. But, if you’re a fan of constant mysteries, you’ll be a fan of Green Wake.