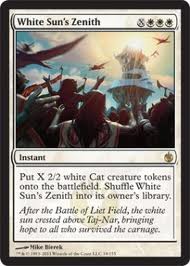 Like Indiana Jones irrationally hates Snakes, I hate being poisoned.

The Mirrodin Block of Magic the Gathering is chock full of creatures with “Infect” (This creature deals damage in the form of -1/-1 counters and to players in the form of poison counters) and I am constantly being killed by these creatures.
Constantly.

So needless to say, I have been hoping for some kind of “Anti-Venom”, “This Card Removes Poison Counters” or “Penicillin” to show up in Mirrodin Besieged and much to my chagrin, such cards did not appear. Instead of that we got “Battle Cry” which gives other attacking creatures +1/+0 until the end of turn. This would have to do.

I recently picked up the Battle Cries intro pack. It is a Red/White Ass Kicker that is focused on straight forward attacking and overwhelming the enemy with lower casting cost creatures (15 of the 23 creatures are 2 or less to cast), toughening up other creatures with “Metalcraft” which gives a creature +2/+2 as long as you control three or more artifacts and a peppering of direct damage, defensive and Myr generating spells. Right out of the box you have a deck that is ready to take the fight to your enemies and with seven creatures with Battle Cry you can do it efficiently.

This set also features a “White Sun Zenith” which has saved my skin on more than one occasion. It is 3 white to cast plus X to put a 2/2 Cat Token on the battle field. It gets shuffled back into the deck so you have the chance to pull it again and again without having to summon it from your graveyard. This comes in very handy if the game is going long and you’ve got the mana to burn because you can instantly raise an army of Cat Creatures and build a solid front line for defense or to swing for a win.

Any shortcomings you might find in the deck can be easily remedied by adding a couple cards, but then again, that’s what is best about MTG, the sky is the limit on building a deck that works for you. The “Battle Cries” intro pack will offer you a great foundation to do just that.

Even when you are being poisoned.

I have finally acquired enough Cat Creature cards to start building a Spinster deck. Follow me on twitter @johnmiserable