I recently had the opportunity to play an early build of Brink, the latest game from UK developer Splash Damage. Brink is an action oriented class based FPS, set in a world that was once a utopia that is now running risk of falling into shambles. Brink combines both the imagery and intensity that is reminiscent of the film Waterworld and the game Mirror’s Edge. Fortunately it does NOT have that (summon the spirit of the late great Don LaFontaine voice), “In a world of browns and muted colors,” feel to it. Large big blue skies contrast to the grit of Container City.

Style is not the only parallel to the game Mirror’s Edge. The addition of parkour style of movement enables the player to perform more complex combat techniques, as well as traverse the terrain in a unique fashion.  This control mechanic allows the game play experience to change the way it is played, which can be unique, depending on the class and aspects of the character build.

The character and weapon designs are quite strong. Thankfully without traveling to the uncanny valley, the characters have realistic design. By using exaggerated features and stylized body design, the parkour element of the game is given merit and thus giving these characters, some character. The last thing I need is a complex about how much better looking Nathan Drake is than I am. 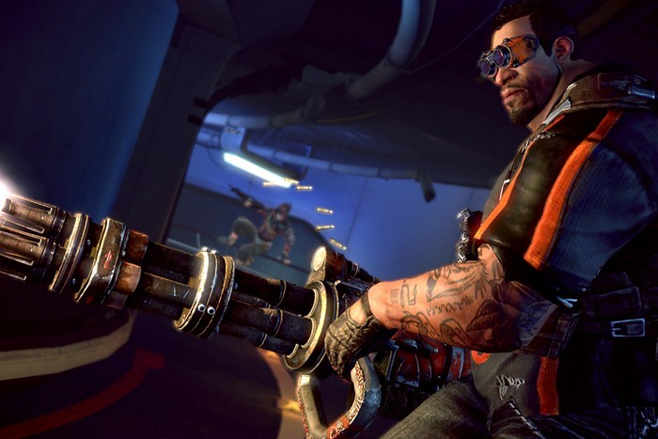 The weapon models harken realism with familiar builds, they are however for the most part fiction. Much of the RPG elements come from within the weapons customization and character abilities that are unlocked along the way. Some clothing and accessory options are available to the player at the beginning of the game. What would a class based combat simulator be without some headgear choices?

With experience in creating multiplayer content for other successful first person shooters, Splash Damage uses their knowledge of the genre by creating a whole new multiplayer cooperative experience. Utilizing some familiar game mechanics from other online shooters and combining them into a new experience is where Brink might stand out from other tight mapped console based shooters. Brink also supports true drop in drop out cooperative game play.

With 4 customizable classes, medic, solider, engineer and operative, Brink brings a fresh approach to objective based team combat. A compelling story of a type of caste war between those that have, and those that want, is told through the narrative of characters surrounding the player. The player is not the main protagonist of the story, their role is more that of a trusted ally to either side of the conflict. As the role of “any-man,” your deeply customizable character can be seen in many of the cut scenes in the background as a supportive role. I enjoy the ability of changing classes on the fly, and healing up my team mates when there was a push situation.

With a scheduled release of May 17th I look forward to seeing more from Brink this spring on Playstation 3, Xbox 360, and available for PC through Steam. Check out our photo gallery below for some images.

In between ducking for cover and buffing teammate with health packs Chuck can be found on Twitter – @JapanDudeGirl .

Of Birthdays, Cake, Jesus, Little People and the Prospect of Hell