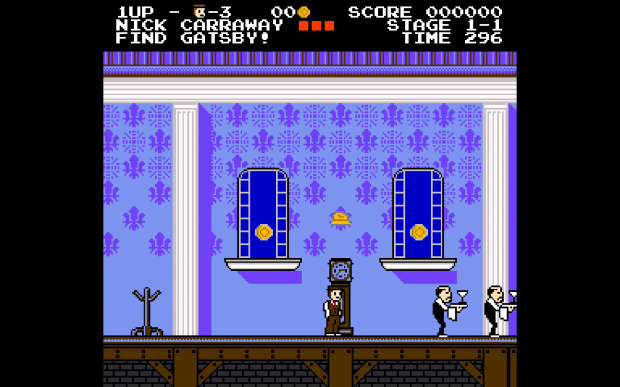 When it works, irony is a wonderful thing. When it doesn’t, well, we all know what a violent automobile accident sounds like.

Lately there has been quite a buzz surrounding a ‘mysterious’ NES-styled videogame based on the F. Scott Fitzgerald classic The Great Gatsby. Borrowing from Zelda II: The Adventure of Link, Mega Man and Super Mario Bros., the game is an eight-bit side-scroller in which Nick Carraway’s fascination with the enigmatic Jay Gatsby is transformed into an archetypal quest to reach the mythic green light (if you hope to rescue Gatsby at the end, quit while you’re ahead, he’s dead). For four levels, the player navigates Carraway through a party, a freight train, New York City and West Egg, each rife with baddies ranging from dancing flappers to a pair of teary eyeglasses inspired, of course, by the book’s iconic cover. The game plays well and provides a modicum of entertainment, especially for the nostalgic gamer, yet as the game progresses and its difficulty increases, any excitement is lost in its anticlimax. It just ends.

If the aim of the game is to introduce a classic to a new generation of readers, it definitely piques enough interest to warrant a visit the local library. If the creators, on the other hand, intended to produce an ironic rendering of the novel to tickle the hordes of Ivy League lit-snobs who trawl the internet day in and day out in search of the academically irreverent (a class of snob to which I, Dear Reader, sadly belong), my advice is to keep digging. 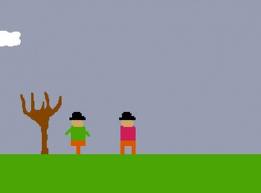 Last Spring, Vector Belly released a videogame adaptation of Samuel Beckett’s Waiting for Godot. The object of the game is simple: wait. True to the source material, the two-player game sets Vladimir (Didi) and Estragon (Gogo) under their withered tree. As a matter of fact, that’s about all it does. Every level is exactly the same as the players (if they so chose) navigate Didi and Gogo back and forth for a little while until it’s time for the “Boss Battle.” During these incredibly mundane moments, nothing happens. The graphics are bland, the design is shoddy and the game play is an exercise in futility. At one point, playing as Gogo, I lost entirely the ability to move. I was fixed, yet the game continued. While furiously trying to move Gogo, I looked up and realized that I, too, was suffering a similar fate. I was glued to this god damned unnecessary game (read: giving my life a vasectomy). It was anticlimax at its worst, and I have never been more fulfilled.

Whatever you are looking for, be it adventure or enlightenment, excitement or impotence, The Great Gatsby and Waiting for Godot, despite their shortcomings (accidental or intended), deliver. Just make sure to read the material first.

If you so desire, you can play The Great Gatsby here and Waiting for Godot here.