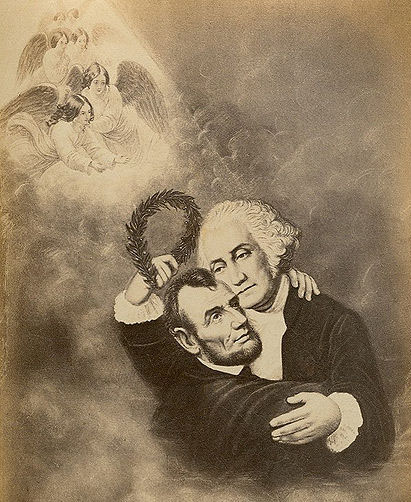 On February 12th, 1809, the first American superhero was born in the wilds of Illinois, where he was cared for by his parents and a giant bald eagle named Windy Pete. Many were the accomplishments of Abraham Lincoln – besides being President of the United States of America, he was an accomplished abolitionist (not only did he abolish slavery, but he abolished the mustache for a short time as well; however, unlike slavery, mustaches will always grow back) and he ended the Civil War by beating the giant General Robert E. Lee in a wrestling match.

Soon after that legendary feat of strength, Lincoln was cruelly shot down on April 14th, 1865, by the cowardly bastard (and probable communist) John Wilkes Booth. A handsome and wealthy actor, Booth loved both mustaches and slavery and could not stand that President Lincoln had bested his beloved Robert E. Lee in hand-to-hand combat.

The entire nation mourned for Abraham Lincoln (even the giant Robert E. Lee) but none more than his old friend Windy Pete, who, after the funeral, bore his body aloft to Heaven where he combined, Voltron-like, with the spirits of Jesus Christ and George Washington to protect our great country for all of eternity.

But the story doesn’t end there.

Booth, meanwhile, had escaped using mystical powers learned during his time in the Far East. He fled to Maryland, but there his luck ran out and he was shot and killed by American soldiers. Soon after, Booth’s body was lost, most likely spirited away by Confederate sympathizers intent on performing their heathen burial rites.

The body was recovered in 1995 by Neil Fallon, singer of the rock band Clutch, who dredged up the sealed lead coffin that contained it while fishing in the Susquehanna River. Fallon subsequently sold the body in a black market auction to an unnamed millionaire, who in turn donated it to the Smithsonian Institute.

All of this is a matter of public record. However, recently it came to my attention that Unwinnable contributor Dave Trainer, a former resident of Portland (and probable communist) bears the middle name Booth.

His mother, no doubt a proud American ashamed of her villainous ancestry, denies Dave is Booth’s descendant, explaining that Booth was a common Irish name for the period. Being a pinko who hates freedom, Dave merely shrugs when you ask him about it and says, “That’d be kind of cool, man.”

Other evidence has come to light since then. I have learned that his brother’s middle name is Clark. This may seem of little consequence until you learn that Booth’s sister’s married name was Clarke.

There is also the matter of Dave’s uncanny resemblance to the assassin, which I have illustrated with a selection of photographic comparisons. The results are compelling:

In light of this grave evidence, Unwinnable has secured DNA samples from the Smithsonian’s corpse to prove once and for all that Dave is part assassin.

In the meantime, however, Unwinnable would like to put out a call to any of the descendants of the great Abraham Lincoln (or anyone who at least resembles Abraham Lincoln) who would like to enter the squared circle with Dave Trainer to reenact that titanic spectacle of fisticuffs between Honest Abe and Robert the Giant. We want to see you give him a good thrashing in the name of the Freedom and America. Who will step forward to do battle with David Booth Trainer and avenge the Lincoln family name?