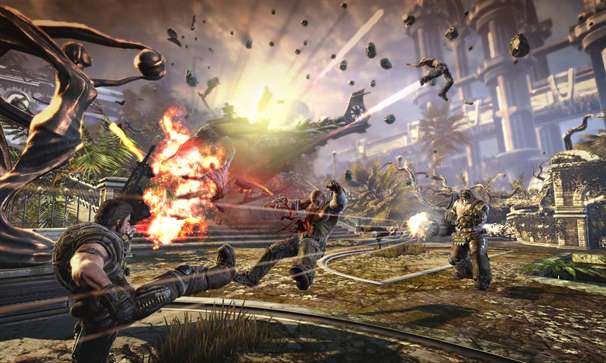 It may be President’s Day, but that does not mean we’re going to pull our punches when it comes to the two major shooters hitting stores this Tuesday.  That’s right,Team Unwinnable is taking aim at Bulletstorm and Killzone 3:

Chuck Moran: I don’t know much about the fan fiction style Nazis of Killzone 3 other than they look cool. However I do know I that I will hold judgment on Bulletstorm until I see the other fun over the top shooter that the public has been waiting years for. That game comes out this year, and is going to kick the Bulletstorm right to the used bin. That is a game that goes by name, and that name is Duke Nukem.

Don Becker: Is there anything more American than a futuristic shooter where you can grab opponents with an electric whip and pull them into exposed rebar while shooting them in the ass? Let’s hope so. Not that Bulletstorm doesn’t look like hours of fun for all ages (above 18, anyway), but I don’t think I’ll count it as my patriotic duty when playing it this week.

As for comparisons to Duke Nukem, I think deep down Epic’s tie-in between Bulletstorm and the Gears of War 3 demo is enough to sell some copies, perhaps moreso than the Chinese Democracy-esque hype that’s accompanied Duke for the past decade and a half.

Ken Lucas: I can’t seem to escape hearing about Duke Nukem. I like the Bulletstorm demo, although I’ve played other games that had a gauntlet type device in the arsenal. I will say that the addition of a kick type move in an fps brings me back to Neo Geo’s Super Spy and Capcom’s Breakdown. I like the fact that it’s not purely focused on run and gun or tactics but on trick shots. I haven’t played any of the Killzone games but have always heard decent things about them. I do like the style of the characters but it always reminds me of the Kerberos Panzer Cops from the animated film Jin-Roh.

Richie Procopio: I think if you buy Bulletstorm next week on Games for Windows Live, you get a copy of Gears of War 3 for free.  I’d assume for someone like me who has never played Gears of War, that’s a pretty sweet deal. You get two amazing shooters for the price of one. I played the Bulletstorm demo.  I thought it rocked.  I can honestly say I’ve never played a demo before that actually told me to go out and buy the full game and then called me “Dick Tits.”  My wife heard it from the other room and asked me what the hell I was playing. All signs of a good game.

Ian Gonzales: I don’t know much about Killzone 3, so I’ll reserve judgment. I did, however, play the Bulletstorm demo. I like the creativity the developers put into a an otherwise generic looking shooter and that fifteen minutes of gameplay was fun. However, I’m much more interested in Marvel Vs. Capcom 3 right now. When MODOK, Wesker and X-23 pummel your feeble attempt at a New Avengers team, please feel free to say hello.

Dave Trainer: Remember that movie Rollerball with LLCool J and that douche from American Pie, Chris Klein? Yeah, me either and Bulletstorm has nothing to do with it, but the game reminds me of a arena type game that’s out of control and pure action, much like the make believe sport of Rollerball. Except you can melt people and kick them into Cacti for points…I haven’t played the demo enough because i’ve been trying to get my Phoenix Coyotes into the playoffs. As for Killzone 3, it will look good. It will play well. But it will have a boring story and be popular because it looks good. Have a great week! Cheers.