Living in Portland seems to grant me a level of street-cred I’ve been able to ride for the majority of my adult life. The city is, at the very least, a part of a lot of people’s periphery. Our environmental practices and policies are nationally lauded. Our music scene has perfected the delicate oxymoron of being a well-known underground. The beer is good and rent is cheap. Really, not too shabby for a town in a state people still pronounce as OH-REE-GONE. Sure, we may take ourselves a little too seriously at times. And the hipster epidemic shows no signs of slowing. But it can’t be that bad, can it?

Turns out Fred Armisen, Carrie Brownstein and IFC can still show me a thing or two about my City of Roses. 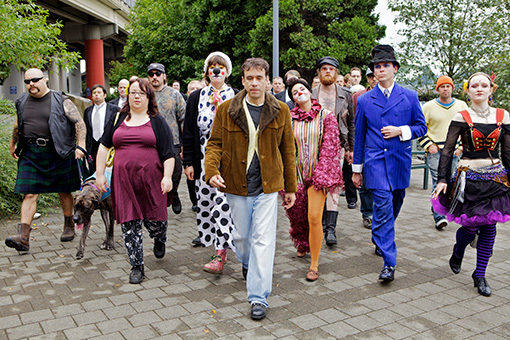 For one reason or another, my hometown has been propelled to the center of pop-culture attention. We’ve got our (limited) share of heroes: Gus Van Sant, Chuck Palahniuk and Elliott Smith, to name a few. They’re immortalized as Portlanders even if their residency was short-lived. We are dedicated fans, eager to cheer our hearts out for anyone from the Blazers to the Rose City Rollers to the latest reality show contestants. And statistically, we’re some classy folk, with the most per capita of microbreweries, strip clubs, and… er, urban chickens. So when I first heard about the new IFC series Portlandia based on my birthplace, I thought, “it was only a matter of time.”

My partner and I finally settled down to watch the first episode (on Hulu, because we don’t own a TV). For a good portion of the rather catchy opening musical, “Dream of the 90’s,” we would glance at each other with expressions of ‘wait, you mean it’s not like that everywhere?’ A few hours a week at a coffee shop is enough work to pay rent, and sleeping ‘til 11 is getting up early. Yes, there are plenty of clowns and double decker bikes and clowns on double decker bikes. Tattoo ink may even be subsidized by the city to never run dry. But come on, Mr. Armisen, you make us out to be a home for Burning Man the other 51 weeks of the year. 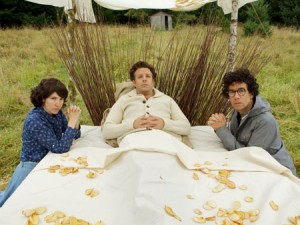 The following montage of the Portland cityscape was fairly exciting, at first. Recognizing all the neighborhood spots must have felt similar to Jersey locals watching The Sopranos. But it also gave me an uneasy feeling, like my privacy was being violated, like I didn’t sign on for this kind of exposure. Take me on a few dates, have an open dialogue with me about consent then maybe you can begin to mock my very existence.

The moment the server provided the Children International-style paperwork to the couple ordering the chicken I was hooked. It exposed the aloof, unfounded pretention that Portland diners perpetuate and that local restaurateurs gladly cater to. It was so well executed, especially when they later visit the farm, that any personal investment I harbored was washed away by the power of a well-structured joke. This was going to be good.

The “Mind-Fi” bit was out of place because it didn’t target Portlanders specifically but the tech-obsessed, always-connected culture as a whole. It seemed like a carry-over sketch from contemporary SNL writing—maybe I just think that because it wasn’t funny. Could this be because I am, right now, writing for a blog about videogames and geek culture? You decide, reader.

The rest of the show was a hit for me. At the farm, SNL’s Jason Sudeikis played a cultish charmer Aliki whose deathbed banter with Brownstein may have been the highlight of the episode. The feminist bookstore sketch showed more of Portland’s righteous zeal pushed too far; but the collective reaction from my friends and I was, “Steve Buscemi was here and we missed him!?!” And the elderly woman extra in the amateur hide-and-seek league short tried to remind our characters that you can’t hang on to your innocence forever, perhaps also speaking to Portland itself and its place in the world. 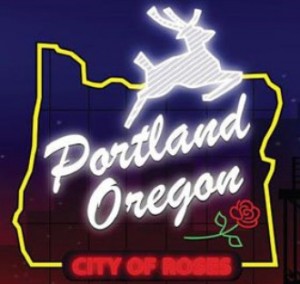 Carrie Brownstein, a Portland native herself (I see what you did there), paired with Fred Armisen turn out to be a great on-screen duo. They play off each other well enough to cycle through the various personalities without missing a beat. Maybe it’s because I recognize her as Carrie Kinney, of Sleater-Kinney fame, but Ms. Brownstein adds a layer of authenticity to the jokes that pushes it beyond that of topical humor. And Fred Armisen seems like he’s actually having fun with the characters, which means he’s actually being funny. This is a big deal, as no one besides Will Farrell or Tina Fey has accomplished significant recent success outside of the SNL studio (you suck, Fallon).

It’s true, part of why Portlandia works is because the creators don’t have to try too hard to parody the wealth of material in our town. But the reason it works so well is because Armisen and Brownstein know exactly what to exaggerate and just how far to take it. And while I’m eager to find out what the cast will satirize next, I’m maintaining some guarded hesitation, in case the next ridiculous character turns out to be me.