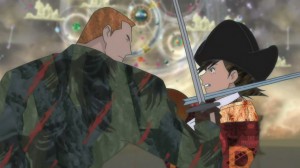 Considering the enormous leap in creative animation that director Maeda Mahiro and his team take with 2004’s Gankutsuo (24 Episodes), it’s to their added credit that they also manage to shed new light on such a well-known tale in the experiment. In doing so, Maeda takes liberties with the tale both focally and anachronistically. Gankutsuo is a retelling of The Count of Monte Cristo from the perspective of Albert, the son of Fernand Mondego, the target of the Count’s vengeance. The story also takes place in an interplanetary future, rather than an intercontinental past.

The creative technique to which I refer can hardly be justified by explanation, but I will attempt it nonetheless. Imagine a colorfully animated series with very slightly thicker lines than most early 2000s projects. Then, remove all color from elements like clothing and hair so that those parts of characters are transparent. Then, for each individual element of clothing and hair, place a static, patterned background behind the animation cel. Thus, as the characters move, the static patterns stay still, but appear to be moving in opposition to the characters by some strange optical illusion that I scarcely understand. 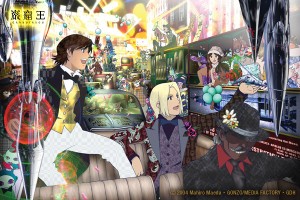 The result is breathtakingly beautiful, but also very distracting for the first few episodes. Again, it is to the creator’s credit that the story, particularly the opening plot arcs, is familiar (Albert’s abduction in Rome in the novel; in Gankutsuo it’s a lunar colony). By the time the story takes on its own life and interpretation, our eyes have adjusted to the presentation of this new world, and we are free to chomp down on all the juicy developments moving forward.

Gankutsuo is a visual feast, but it is also a tragic and compelling story of revenge and the failure of love to overcome the depths of hate. You won’t be amiss if you’ve never read the novel (I dare say you might be a bit piffed if you have) or haven’t seen another filmic adaptation. Gankutsuo is a self-contained bit of magic that is guaranteed to please your eyes, even when it kind of breaks your heart.