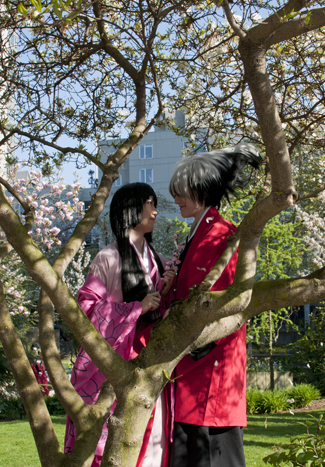 Maybe not me personally since, as a member of the press, one must keep an arm’s length in these situations–or maybe I’m just no Don Juan–but however you look at it, Sakura-con spared no expense finding ways to marry off the masses of single anime fans at their convention.

The first night hosted a panel called “How to Talk to Girls,” which included some examples of what not to say from popular anime. Later that night there were waltzing lessons and a grand masquerade ball at which people actually danced. I might have expected something more like that one dance-less moment toward the end of Footloose, but inhibitions at Sakura-con were refreshingly low.

It was Saturday that really got things moving, though. In the daytime there was a speed dating event for patrons under 18 (despite my interest in Sakura-con’s many love connection events, my lawyers advised I should avoid this one), which was followed that evening by two adult speed dating sessions, one for the straight community and one for gay and lesbian attendees.

Later that night, the rowdiest two panels of the con came together, one after the other, both focused on Yaoi. The first, a Shonen-ai, or Boys Love, survey that covered every level of the genre–from the sweetly romantic to the smuttily illegal in the U.S.–was hosted by a candidate for a Fulbright Scholarship to study the topic. At one point, a moderator from the Sakura-con staff had to interrupt the presentation with a warning that the audience was toeing the line toward illegality themselves. Nonetheless, the discussion was honest and progressive, looking pretty deeply into the connection, or lack thereof, between such manga and real-life sexual politics.

You see, at an event like Sakura-con, no matter your favorite shows, your status in society or, in many cases, your looks, you’re bound to find people that fascinate you – people you connect with. And so what if you didn’t get lucky; at least the con planners gave you a chance.

Coffee Break From Beyond the Grave