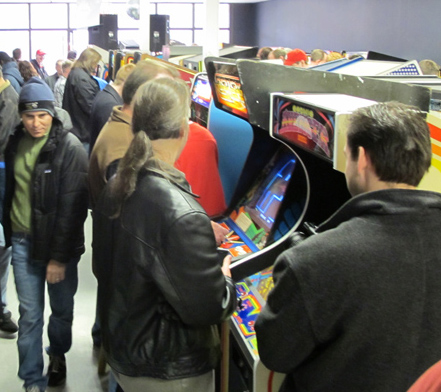 At a storefront arcade next to a barber shop in Flemington, New Jersey, Richie Knucklez prepares. He owns Richie Knucklez Arcade Games and is holding an event this chilly Saturday.

Richie’s enthusiasm and charisma know no bounds. Understandably, Richie is excited; he, along with his wife and staff are hosting one of the largest classic arcade gaming events on the East Coast. He has representatives from the Guinness Book of World Records, official score keepers from Twin Galaxies and a who’s who of classic arcade gaming greats. It’s official – this Saturday morning in Flemington belongs to the quarter pumpers.

A bright sunny Saturday with the nicest weather we have had in days saw Ian Gonzales and I arrive at the arcade around lunchtime. Empty game cabinets decorate the area in front of the arcade where people gather. There is man is selling hot dogs, offering 3 types of condiments: ketchup, mustard and Rickey’s World Famous hot sauce 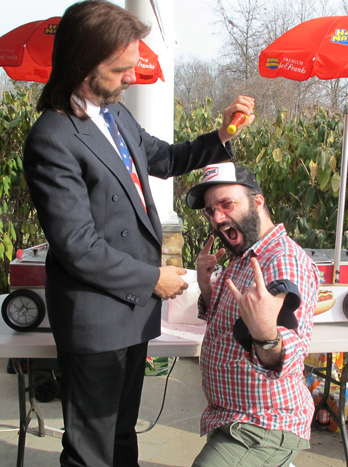 . When Rickey’s World Famous is involved at a video game event, you know that could mean only one thing – Billy Mitchell.

Love him or hate him, Billy Mitchell is the man. The most casual fan may recognize Billy Mitchell from the award winning documentary King of Kong which really brought classic gaming culture to the mainstream. I stood in shock and awe, marveling at how tall Billy was. He is, standing there in a blue suit and USA tie, truly a celebrity. I didn’t get to say much more to Billy than, “Hi how are you.” I commented on how tall he is and how he must have brought the nice weather with him.

With the main event about to start, we worked our way to the Tron competition at the back of the arcade. Richie’s arcade is packed with well over 50 game cabinets. Almost every machine had someone standing at it and players are here with video cameras set up on tripods to tape their progress. On a small stage three old Tron machines are being prepped. Two people are here to break a record; one is trying to keep it. The competition is expected to last between 10 to 14 hours.

The lights go down in the arcade to a great sigh of relief.  The glare from the overhead lights can cause a strain, however the darkness lets the machines glow and shine with brilliance that is all their own.

Several webcams placed around the arcade broadcast the event live on the internet. With the Tron-Off about to start, Richie takes the microphone, addresses the crowd and introduces the players. Current world record holder David Cruz, Donald Hayes and underdog Mark Sellers take their position in front of their machines. I met Mark Sellers brother John Sellers and felt compelled to ask him, “Do you think your brother can hold his pee for 10 to 14 hours?” An experienced gamer enthusiast himself, John told me that during the tank round, if you park your tank in the corner of the screen at the right moment you will have about 2 minutes before an enemy is aware of your presence.

The competition started and the players locked in. There can be only one.

Despite how much fun I was having, I was not going to see who won (Donald Hayes wound up setting the new word record: 9,120,000 points). I didn’t really have 14 hours to spare – Ian and I had places to go. However, if you want to find out more about the arcade gaming scene, I suggest you check out Classic Arcade Gaming. it is the hub of where many of these people meet and discuss tactics and where competitions are organized.