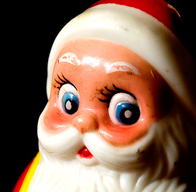 Ah, Christmas, the season of Getting Stuff.

OK, that’s not entirely true, but we’d also be crazy liars if we told you, Dear Reader, that we didn’t want something special waiting for us under the tree on Christmas morning. Getting presents is fun, so we thought it would be fun to share some of the things we want with you, partly to amuse and perhaps also to inspire you to get something extra-special for the geeks in your life. Consider this the Unwinnable Holiday Shopping Guide.

And Santa, if you are reading, we’ve all been extra good this year. Except for that Charles Moran guy. He probably deserves some coal in his stocking.

Stu Horvath: I’ve not run my Dungeons & Dragons campaign in many months (time, alas, is at a premium) but I have to say, that gargantuan Orcus, Prince of Undeath miniature is pretty sweet. Not that my party has any hope of taking him down (remember, last game one of them died by accidentally stabbing himself in the head), but I can’t really think of a good argument against having a giant bat-winged demon sitting on a shelf just in case.

John McGuire: This Christmas I would like the Fire and Lightning set from the Magic: the Gathering Premium Deck Series. The Premium Deck Series has been consistent with fun and easy to play pre-constructed decks that not only look great in foil but annoy the shit out of your opponents (everybody hates Slivers) because the cards work so well off each other.

Ian Gonzales: Recently, I picked up Dear John: Alex Toth Doodle Book. It’s a nifty little paperback, filled with some amazing off-the-cuff drawings by one of the finest artists to ever grace the comics and animation. I’ve always yearned for the ability to draw and Toth’s sketches have rekindled that desire. Mind you, I don’t have a natural ability to draw whatsoever. I doodle at work sometimes and the best thing I did was a sloppy yet straightforward shot of Ultraman (the evil Superman of Earth 3 for all you uninitiated). So this Christmas, I want some drawing lessons!

BTD: Some toy company called Motor Max sells a diorama of the gas station scene from Robocop with die-cast figurines. I can’t imagine that many people would want this for their mantel, but it would make a great addition to the Robocop museum I’m curating!

Dave Trainer: This Christmas I want the Western Digital HD video player so I can hook it up to my television and stream movies  from my computer. George, Stu and Hambone each have one and over the course of the year I kept saying, “OK, I am getting one,” but never actually got one. I want to finally put my 42” TV to the test and fully understand what George means when he turns to me at the bar and says, “Woah, buddy, Predators in full 1080p Blu-ray…dude.”

I also want the Battlefield Bad Company 2: Vietnam DLC to get here faster. I want to BF for Xmas.

Ebenezer Samuel: If you’ve tuned in to Smallville anytime recently, you’ve seen that they outfitted Clark – er, Tom Welling – with a rather bold red leather jacket, kind of a halfway point between that jacket, T-shirt and jeans ensemble he wore for all those years when they were pretending he wouldn’t be Superman and the blue-red-and-yellow tights that are to come. Now, the original Smallville tailor is selling them. After much searching, I found them for sale (well, kind of). Now I’m taking donations, because they cost $2,500 apiece. Or, I may ask Unwinnable for a tiny raise…

Garrett Martin: I’m sick of muddling by with inferior knock-offs. If I don’t get one of Electro-Harmonix’s Memory Man delay pedals (analogue only, of course) I might have to retire from making horrible, horrible music forever. I don’t know if the culture would ever recover.

Matt Marrone: Pretty much all my mad money goes to iPad apps, but there are few tablet treats I was too cheap to take the plunge on this year — and I’m hoping Santa will bring ‘em down from the North Pole. I’ve asked for a Hulu+ subscription (let Saint Nick take the chance of it being a total waste of money) and an Audible subscription, because God knows I stare at computer screens enough as it is to actually read books on the damn thing. But one gift Santa truly can’t go wrong with: iTunes gift cards. They seem so unimaginative, I know, but if I can spend the holidays scratching for redemption codes, well, I’ll be downloading free music and apps well into the new year.

Peter Lang: I would like the Eraserhead and Deep Throat soundtracks on vinyl, please.

Ethan Sacks: If I’m not gifted the Complete 24 box set on Blu-ray or DVD, I may go all Jack Bauer and torture somebody. 56 discs; every frickin’ minute. Time is indeed on my side.

Ken Lucas: My absolute Christmas wish list item would have to be the Yamaha Tenori-on.  It is a touchscreen music instrument consisting of a 16 by 16 grid of LED switches that can be activated in a number of ways to create sound. It was created by Toshio Iwai, who also created Electroplankton for the Nintendo DS.  I have a lot of gear, but this would be my ultimate piece. Or I would just settle for a melodica.

Kevin J. Raineri: Aside, surprisingly, for my desire for a melodica, I want an iPad. I would also like to get rid of my cell phone. I don’t want it replaced with a new one. I want it gone all together and to be in touch only when I so choose. I want to go back to Walden…with an iPad.

Richie Procopio: My kids are finally getting to the age where I can disguise presents for me as presents for them. So for this Christmas, when Grandpa asked what the kids want, the answer was Kinect for Xbox 360. Now I just need to tell my kids what the heck that is before they open it and stare at it blankly.

Carmen ‘Felicia’ De Luccia: Unexpectedly, I really want DJ Hero. Maybe it’s all of the upcoming visions of TRON and Daft Punk dancing through my head…but I had to be pulled away from it, kicking and screaming, on my last Best Buy excursion. Now all I need is a cool robot helmet to wear while playing, and I am all set. As always, there are any number of comic/old movie related statues and prints that would be more than welcome under my tree.

Dan Imperiale: I’ve always dreamed of having one of the giant display iPhones that Apple keeps in its windows to show everyone how colorful and fancy the damn thing is. And I don’t mean I just want it for show; I want it activated and fully functional. Ah, to stroll down the avenue screaming into an iPhone the size of a small child’s bed! That would be an Xmas dream come true!

[Editor’s Note: We were only kidding about Chuck deserving coal. That Michael Sheridan, on the other hand…]