Kevin Raineri has some deep feelings for the world of Ghostbusters. Last week, he revealed how the franchise had a huge impact on his childhood. Today, he examines the possibility of a new movie:

Bill Murray has said numerous times that he would do a new Ghostbusters movie if he dies in the opening reel. Kill him, get him out of the way and move on. The apparent concept of the proposed movie is that the Ghostbusters, invoking the spirit of Danny Glover’s Roger Murtagh, are “too old for this shit.” They then look for a new generation of Ghostbusters (or in another rumor, franchise the brand) to run the business and keep the world safe.

While still not 100% sold on the idea, Murray agreed to be open and read a script. Aykroyd and Columbia hired Gene Stupnitsky and Lee Eisenberg (writers and producers of The Office [U.S.] and scribes of the lackluster Year One). Then came a bizarre twist in the story – Columbia tried to replace Reitman, wanting someone younger and edgier. Reitman reminded the studio he has veto power. After consulting with Aykroyd, Reitman remains the director.

“Try to imagine all life as you know it stopping instantaneously and every molecule in your body exploding at the speed of light.”

In an interview with GQ Murray said: “Well, I never went to see Year One, but people who did, including other Ghostbusters, said it was one of the worst things they had ever seen in their lives.” How optimistic. Murray continues to publicly have a negative tone about Ghostbusters 3.

Harold Ramis, who directed the steaming pile that was Year One, has stood behind the writing prowess of Stupnitsky and Eisenberg. 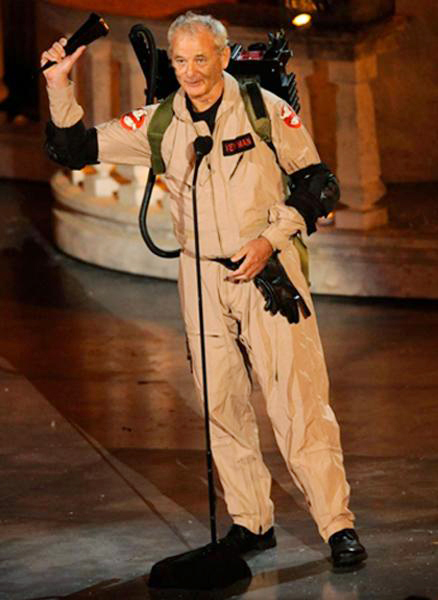 So where do we stand now? Columbia Pictures and Production Weekly both confirm a start date of May 2011 with a Christmas 2012 release. Ernie Hudson, Sigourney Weaver and Annie Potts are all in. According to Ivan Reitman, pal Rick Moranis is 99% un-retiring to reprise his role as Louis Tully. Dan Aykroyd and Harold Ramis are now taking the finished Stupnitsky and Eisenberg script and tearing it apart, adding the character depth, tempo and tone that have made Ghostbusters one of the most quotable films of all time. Bill Murray is in if the script meets his standards.

Murray suited up in full Ghostbusters uniform at the Scream Awards this October. Is he again embracing all that is Peter Venkman? Is he just messing with everyone and suiting up to play homage to his cameo in Zombieland? In the most recent bit of information regarding Ghostbusters 3, an interview with Ernie Hudson on MovieMike.com provides a glimpse into the mind of Bill Murray:

“Bill’s a great guy, he’s kind of quirky but I love him. He’s a guy who is very much into what he’s feeling. I know he really cares about his work, which is probably why there hasn’t been another ‘Ghostbusters’ as of yet…. Dan and Harold are working on the script. If it happens we will see but Bill has been the hold up. His definition of good is a little bit different than everybody else’s. So we will see, I would love to see it happen. I know the fans have been asking for it… so hopefully.”

And now the rumor mill is in full swing with casting rumors of who will play the next generation of Ghostbusters. Is Dana Barrett’s son Oscar going to suit up? Is he actually Venkman’s baby? Do I smell a bad Indiana Jones 4 convoluted child-father thing? Are they looking for a twenty-something actor?

Will Forte, Bill Hader, Anna Faris, Eliza Dushku and Alyssa Milano are all rumored to have been approached about the movie. Rumors about Dushku and Milano stem from Milano’s work on the videogame and Aykroyd’s fondness of both.

“If there’s a steady paycheck in it, I’ll believe anything you say.”

There are also rumors of open calls/mailings for fresh faces/unknowns in LA, Chicago and NY. (Yes, I submitted the ol’ head shot).

Do I trust any of the new rumored actors in my beloved Ghostbusters? No. Do I trust Columbia to ensure the best possible product is made for viewer consumption? No. Do I trust Ramis to revert back to his classic timing and style? No. Can Ivan Reitman shake off the rust and disappointment of his last few attempts at directing (My Super 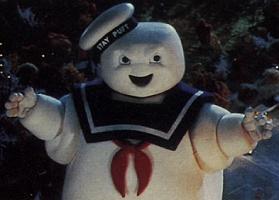 Ex-Girlfriend, Evolution)? No. Can Aykroyd polish the script enough to be worthy of carrying the Ghostbusters name and satiate Murray’s need for quality work? (…)

Every day I pray that good is done by the Ghostbusters name. The only thing I know for sure is that I will be in line at the midnight release with memories filling my mind and hope in my heart.

An Unwinnable Letter to Santa