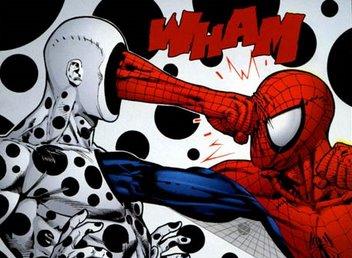 OK, so what have we learned about Spider-Man Turn off the Dark in its maiden weeks?

We learned that Conan’s Spidey “Exclusive” performance (8:58 minute mark) looked like a much better musical than the one I saw.

We learned that SNL agrees that the villain situation is just out of control.

We learned that the Foxwoods Theater, according to Rolling Stone, doesn’t seem to know the future of the production…

We learned that the production is literally consuming its performers one at a time, like Cthulhu with the midnight munchies.

And that’s not all!

We learned that I am not even vaguely exaggerating about the silliness. Check out some of these other “early on-line buzz” comments. I promise I wasn’t joking…

Another honorable mention is the newly dropped rush ticket price ($30 at door/day of show)… because they needed to piss off the full-price-paying -audience just a little bit more…if you made it through the villain beauty pageant, the crooning Goblin, the Greek Tragedy, the mush mouthed music, the “dream sequences” and assorted other wonders and atrocities…just think you paid five times more than the guy next to you! Nice!

Last, but certainly not least, we also learned that songs about stiletto high heels do not belong in a musical about Spider-Man. Hell, outside of La Boheme’s Vecchia Zimarra (“Coat Song”) no piece of clothing should have that much orchestration associated with it.

Spider-man, Spider-Man Turn Off The Dark