Life sucks! You can daydream about having superhuman abilities or read comics about people with super powers all you want, but you’re never gonna be able to turn invisible or fly – not in this lifetime! The best you can hope for is an afterlife in which you can walk through walls and float around. While any story that portrays living humans doing supernatural things is inherently implausible, we can’t completely rule out post-death super powers, for nobody really knows for sure what lies beyond that proverbial banana peel near an open grave. 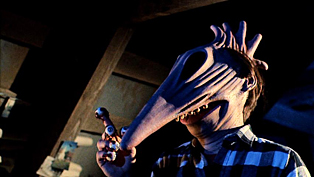 Beetlejuice takes place in a cinematic universe in which dying allows you to do superhuman things, but as The Exploding Kinetoscope explored in a thoughtful and thorough essay, it’s also a universe where very little logic exists. Why is Beetlejuice stuck in Adam’s model of Winter River, anyway? Why are Adam and Barbara’s ghosts stuck in the house that they were living in at the time of their death? What would have happened if they were renting an apartment when they drove their car off a quaint, covered bridge? Why does Catherine O’Hara’s character spend so much time hanging out with her interior decorator?

Unless you get your hands on a copy of The Handbook for the Recently Deceased, the rules of the Beetlejuice afterlife are inscrutable. But one thing seems clear: you have to be creative. Death grants you the power to manipulate the physical world in order to frighten, entertain and humiliate the living, but only if you’re imaginative. Simply ripping your face off or putting holes in designer sheets won’t cut it, unless you’re trying to impress a proto-goth Winona Ryder. You need to choreograph a musical number to Harry Belafonte, or at least gouge out your eyeballs and stick them on your fingers like olives.

Ghost, on the other hand, is pretty meticulous about explaining the logistics and rules in its version of the afterlife. It’s all laid out in a sequence that takes place on a subway platform, as Swayze learns the ghostly arts from the “subway ghost,” played by the late, great Vincent Schiavelli. This scene is by far my favorite part of the movie; the rest of it is all about cartoonish yuppie villains, cartoonish streetwise sidekicks and the fucking Righteous Brothers. At least they didn’t use that “Rock and Roll Heaven” song.

As was the case in Beetlejuice, being able to manipulate objects in the Ghost universe is largely a matter of having the right mindset. You have to come to grips with the fact that you’re no longer a tangible entity. It makes sense when you consider that the Ghost universe seems to conform to the typical notion of ghosts being people with unfinished business on Earth. They’re essentially manifestations of earthly butt hurt, and so it makes sense that they would be able to accomplish things by harnessing emotions. Ugh, why am I writing about Ghost? 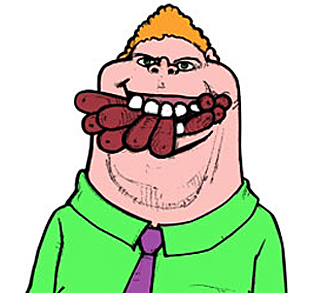 Let’s discuss something a little cooler! Ghostbusters paints a rather unappealing version of the afterlife in which your spirit essentially becomes a mindless pest that needs exterminating. Also, your apparition doesn’t look great. What did Slimer look like when he was alive?

So you die in the Ghostbusters universe, and you get all the usual ghostly powers. The one truly unique thing about being a Ghostbusters ghost is the ability to leave ectoplasm behind. You can “slime” people. What does sliming accomplish, aside from making your victim feel “funky?” We’ll probably never know, but I for one find comfort in the notion that if someone refers to you as an “ugly little spud” after you die, you could exact vengeance upon him!

And before I check out, what about Albert Brooks’ classic Defending Your Life? If you’re a character here, you might get to be a genius after you bite the big one! Yes, if you’re deemed worthy (just watch the movie, it’s too complicated to explain), you’ll gain intellectual abilities unheard of in our terrestrial realm, smarts that allow you to actually manipulate your own senses so that a plate of crud that looks like dried-out Fancy Feast tastes delicious to you. That’s some pretty hardcore intellectualism! I’m not even smart enough to convince my brain that Rick Wakeman’s Six Wives of Henry VIII is fun to listen to, let alone outsmart my taste buds the way Rip Torn does in Defending Your Life.

Believe, Bruv! An Interview with Attack The Block’s Joe Cornish