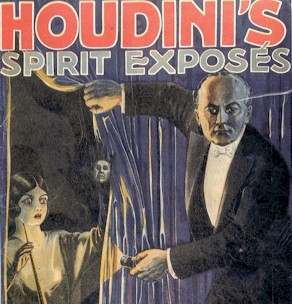 The name Harry Houdini is synonymous with magic, escape and deception. Indeed, they were some of the Master Mystifier’s greatest passions but he did have others. As we approach the anniversary of Houdini’s untimely death, I want to look back at another of his passions, specifically his love of literature and how it factored into his life and death.

Houdini authored several books on magic. In fact, Houdini spent a great deal of his life and money researching and writing a comprehensive book about the magic profession and its history. From Walter B. Gibson to H.P. Lovecraft to Sir Arthur Conan Doyle, Houdini surrounded himself with prolific writers in order to work with them and learn from them so he could achieve this dream. Ultimately, some believe this passion contributed to his demise. 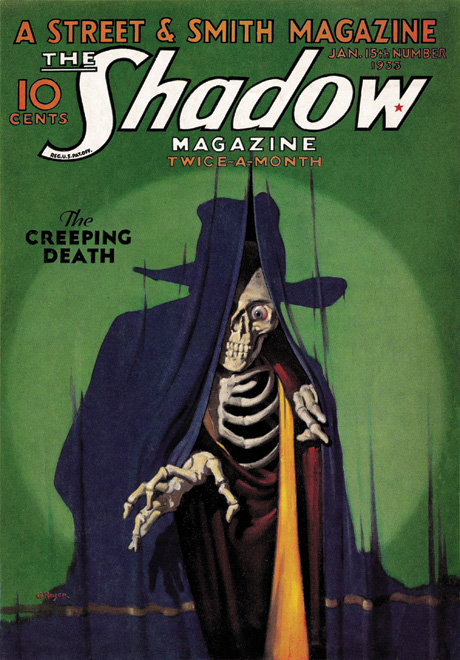 The name Walter B. Gibson is synonymous with a pen name, Maxwell Grant. Under that shared pen name, Gibson created the man who knows what evil lurks in the hearts of men – The Shadow! Gibson, also a practicing magician became acquainted with the Houdini in 1916. While establishing himself as a professional writer, Gibson’s work on magic caught Houdini’s attention. The two met casually and eventually became close friends. In fact, Gibson served as Houdini’s ghostwriter for many works on the practice of magic. Gibson edited and wrote the introduction for Dover Press’ Houdini On Magic in 1953 and the book is still in print today. As a pulp writer, Walter Gibson had a lot in common with another of Houdini’s literary friends, H.P. Lovecraft.

The name H.P. Lovecraft is synonymous with slimy and ancient cephalopodic horrors that lurk in the corner of the mind. Stephen King, Alan Moore and a host of other acclaimed writers cite the pulp writer, best known for his Cthulhu Mythos, as a major source of inspiration. The owner of pulp magazine, Weird Tales, hired Lovecraft to write a story Houdini recounted to him about his travels in Egypt. 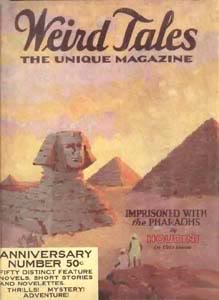 Lovecraft wrote the story and it ran with Houdini’s byline in 1924. Houdini, impressed with Lovecraft’s story, “Under The Pyramids,” became friends with the writer. While Houdini rallied against the Spiritualist movement, Lovecraft fought an embittered battle against astrology. The two were kindred spirits.

As detailed by Lovecraft biographer S.T. Joshi, Houdini hired Lovecraft and friend C.M. Eddy Jr. to write The Cancer of Superstition, a book debunking the Spiritualist Movement. While the project was never finished, according to Joshi’s Collected Essays Volume 3, “[a] detailed synopsis prepared by Lovecraft for The Cancer of Superstition does survive, as do three chapters of the treatise written by Eddy; but Houdini’s sudden death on 31 October 1926 derailed the plans, as his widow did not wish to pursue the project.”

The name Sir Arthur Conan Doyle is synonymous with his literary creation, Sherlock Holmes. However, Doyle was heavily involved in the Spiritualist Movement. At first, Houdini and Doyle’s associations were quite friendly. Doyle would try and get Houdini to give mediums a chance while Houdini learned what he could from the world-renowned author. Sincere admiration for each other’s talents soon succumbed to their opposing agendas.

Houdini met with Sir Arthur Conan Doyle in an attempt to gain access to spirit mediums. Doyle, anxious to convert one of the world’s foremost skeptics jumped at the chance, introducing Houdini to mediums he felt were true and honest. One of those mediums was Sir Arthur’s wife, Lady Doyle. Lady Doyle held a séance with Houdini in Atlantic City, NJ on June 18, 1922. During what can only be described as her performance, Lady Doyle claimed to contact Houdini’s deceased mother. Mrs. Weisz, speaking through Lady Doyle’s hand, wrote in perfect English, used the sign of the cross and conversed very generally. She didn’t fool Houdini for a second.

Mrs. Weisz was a Hungarian Jewish immigrant who spoke broken English. She would not have written as Lady Doyle wrote, nor would she have made the sign of the cross. Also, her birthday was June 18 and Lady Doyle never once mentioned this. These three pieces of evidence, combined with the fact that Lady Doyle tried getting information from Houdini’s wife, Bess, the night before left Houdini with one conclusion: Lady Doyle was a sham. This one act led to the breakdown of Doyle’s and Houdini’s friendship and it led to their bitter rivalry, one that Doyle continued after the Handcuff King’s death.

The year was 1926. While Houdini continued to expose Doyle’s medium friends, Lovecraft worked on The Cancer of Superstition and Gibson wrote magic books for famed magicians Thurston and Blackstone. That same year, a young man named Jocelyn Gordon Whitehead would viciously punch Houdini in the stomach, rupturing his appendix. As detailed in The Secret Life of Houdini (the book is a treasure trove of information and definitely worth the read), Whitehead was associated with men and women closely associated with Sir Arthur Conan Doyle; men and women who corresponded with Doyle shortly before and after Houdini’s death October 31, 1926. The letters were celebratory in tone.

Two weeks after Houdini’s death, Sir Arthur Conan Doyle went to work on the grieving Bess Houdini via letters and suggestions of contacting Houdini in the spirit world. Lovecraft and Eddy stopped working on their book right after Houdini’s death at Bess’ request. Mediums all over the world claimed to have contacted Houdini on the other side. It seemed as if Houdini’s greatest enemies were attempting to hornswoggle his legacy. She knew them all to be frauds, but eventually relented to Doyle and began to see mediums he suggested.

Bess Houdini held séances every year on the anniversary of her husband’s death – Halloween. Ten years later, when Bess could no longer preside over the séances, Walter B. Gibson took over. Gibson did not have the aversion and skepticism of the supernatural Houdini and Lovecraft had and he wanted to preserve his friend’s dignity, untarnished by Houdini’s foes. And so to this day, Houdini has never contacted anyone from the other side.