For most people my age, the console that defined the early 80s (the pre-bust era of videogaming) was the Atari 2600. It had a huge library of games, including some classics like Adventure, Breakout and Bombs Away. However, my formative years were defined by a different wood-paneled beast hooked up to my (parents’) 19″ living room TV:

I’m not 100% sure why my parents relented and got my brother and me an Intellivision. My brother, seven years older than me, already had a full complement of Telstar consoles that were gathering dust in his closet. Maybe it was the fact that I blew off my entire extended family to play Astrosmash and Lock ’N’ Chase with my cousin one Christmas day? Whatever the reason, my parents did cave eventually and we became an Intellivision family.

I can’t even begin to tell you how many afternoons and weekends I spent parked in front of the family TV, controller in hand, impatiently bending the bottom of those damned plastic overlays that slid over the keypad. Apparently it was a few too many, because within a year or so I had my very own Intellivision II and my mom got to watch Dallas and Falcon Crest on Friday nights again. Money well spent, I’m sure.

The Intellivision carried me through until I was 11, at which point I moved on to my Commodore 64. My move was inspired equally in part by the existence of the Enhanced Computing System for the Intellivision sparking an interest in computing and by the Intellivision II dying. Every so often (up until I left for college) I’d go up into our attic, pull the old Intellivision down, dust it off and relive the classics.

Fast forward to the Unwinnable “Meet Up & Drink Up” a few weeks ago. With an hour to kill between Fearless Leader (AKA Unwinnable Editor-in-Chief, Stu Horvath) taking my official photo and the sangria and chorizo filled hootenanny that followed, I drove out to Digital Press in scenic Clifton, NJ and bought back a piece of my childhood: 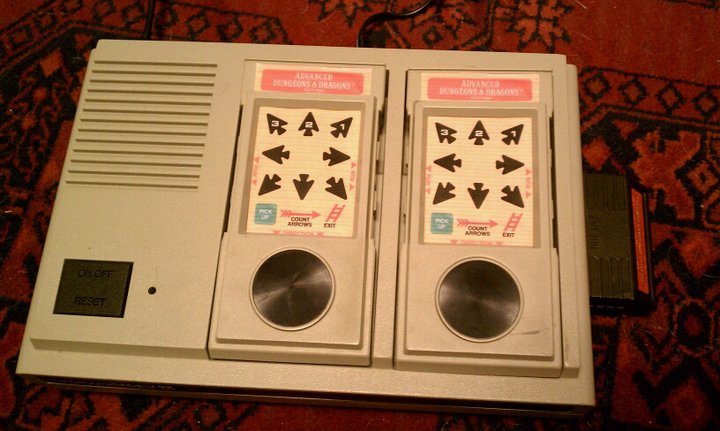 Oh, sure, I could’ve played the games via emulation (and I have – jzIntv and Bliss are both excellent emulators) but there is no substitute for using the actual controllers, no matter how non-ergonomic they are. Thanks to both Digital Press’ stock and a few well-placed eBay bids, I have managed to reclaim three of my favorite games.

This classic game scared the bejeezus out of me as a little kid. The distant rumble of a dragon lurking around the corner was enough to make me hide in another room, even though said bad-ass dragon looked more like Grimace or Barney than Tiamat. 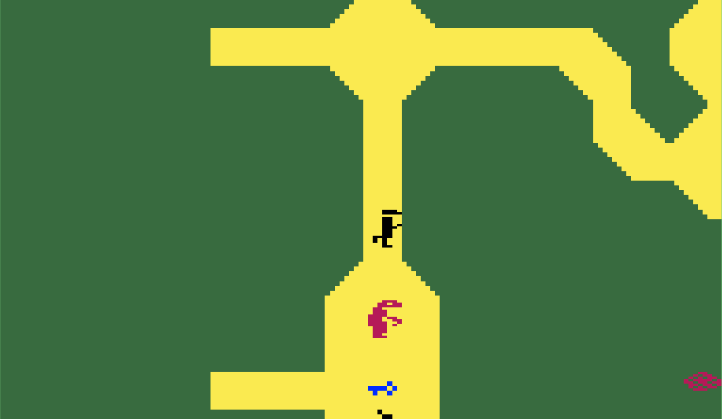 I had a hard time mastering the game’s subtleties as a kid. You see, I started the game with three arrows and I would usually misfire them all in the first mountain only to get killed by a lowly rat or an indestructible blob. It also didn’t help that quivers were a rare commodity! It was only when the formerly anonymous Mattel programmers, the Blue Sky Rangers, released the Intellivision Lives! Collection, which included AD&D (listed under its working title, Adventure, as they didn’t have the proper licensing from TSR Games) that I realized that I was playing the game all wrong. The limitations of the Intellivision controllers made it impossible to move (with the controller disc) and fire (with the keypad) at the same time, so the solution (which seems obvious now) was to use one controller to move and the other to fire. After that, I owned those mountains! I still love firing up a little AD&D and spending 15 minutes hacking and slashing (well, hacking and arrowing) my way through demons, snakes, and arrow-eating spiders. 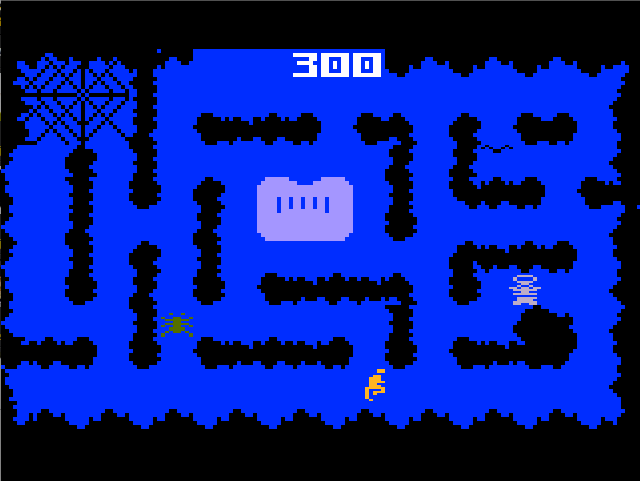 While this game didn’t scare me like AD&D did, it did fill me with a sense of dread. It’s a simple top-down view of a maze patrolled by lethal robots and non-lethal bats and spiders, so it’s not like there were surprises around the corner like in AD&D.

The simple one-note soundtrack (and the fact that both you and the robots can only have one bullet on the screen at a time – hooray, hardware limitations!!) does a great job of building tension as it gets faster and the difficulty increases.

As you advance, you arrive at the point where the bats are replaced with more robots and more powerful robots that can destroy your safe house and then the game gets downright nerve-racking. Much like AD&D, playing with two controllers is a must. Looking back at this game, which came out 25 years before Gears of War, it’s interesting to see that seeking cover is a major component of a successful strategy in this game. 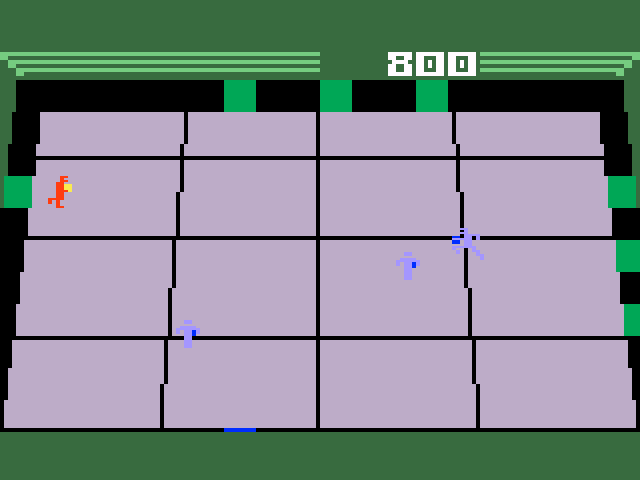 The grand bull moose of Intellivision games! Out of the entire Intellivision catalog, this is the game I most wanted to reacquire. The game play was pretty simple and similar to Night Stalker; top down, shoot the baddies and avoid their shots. The difference is that you could move in 16 directions and fire in eight. Also, you only had one life. Eventually the bad guys could lethally freeze you (at the 1M point plateau). This game, above any other, was the impetus for me to buy a real Intellivision, because trying to play on a laptop keyboard or Xbox controller just didn’t work. Surprisingly, my first game of T:DD on my new Intellivision saw me net a higher score than I’d ever gotten in my youth. Call it a combination of maturity, patience, and the aforementioned two-controller trick.

Apart from emulation, there are other ways to enjoy these games. The Blue Sky Rangers have released the Intellivision Lives collections for multiple platforms – PC, Xbox, PS2, GameCube, and the NDS (coming soon). Microsoft Game Room has about 35 Intellivision games that are all playable on the Xbox 360 and PC. Sadly, TSR and Disney’s defense of their intellectual property means that AD&D isn’t available for every system, and T:DD isn’t available for any of them. However, for about $60 in terms of hardware and loose cartridges, I feel like I’ve gotten both my money’s worth and reclaimed a part of my youth.  As I rapidly approach 40, isn’t that what life is all about?

My Mother the Gamer

The Hags of Black Woods