When I was in high school, I got a job at an amusement park.

In between putting single-digit-aged children on rides that I assure you were 100% safe, I spent a good amount of time inside the arcade. At least half the floor space inside was taken up by classic pinball and arcade games – Space Invaders, Galaga, Karate Champ, Asteroids and Donkey Kong (to name a few) are the ones I remember most. Knowing full well that most kids weren’t interested in playing games that came out before they were born, the owners eventually relented and put in a few more modern games – Chase HQ, Street Fighter II and a pair of Teenage Mutant Ninja Turtles arcade games.

When rain came and the rides closed, we’d load up on quarters and wait out the storm with the four-player battles against Bebop, Rocksteady and, eventually, Shredder and Krang (the game offered unlimited continues as long as you kept feeding it quarters, after all). TMNT wasn’t the first beat-’em-up, nor the last. It wasn’t the defining game of the genre. It did, however, reinforce what many of us already knew – there’s a visceral thrill in beating up dozens of identical bad guys, even if you’re paying 25¢ a go for the honor.

Scott Pilgrim vs. The World: The Game taps that thrill for all it is worth.

The concept and execution are straightforward: play as the title character, his girlfriend Ramona Flowers or his Sex Bob-omb bandmates Kim Pine and Stephen Stills in a quest to defeat Ramona’s seven evil exes. Much like the comic books, the game is pays homage, rips offs and alludes to a seemingly endless list of classic video games. Tribute is everywhere – in the gameplay, the graphics and the excellent soundtrack by Anamanaguchi. 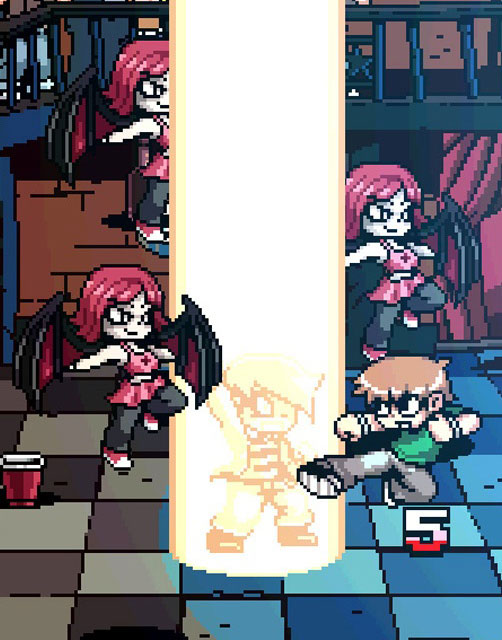 More than anything, it plays an awful lot like TMNT did 20 years ago. Up to four players (local multiplayer only, unfortunately, which means I’m going to have to clean my house if I want to get a full game going) fight through seven mostly horizontal levels, a lot of similar-looking baddies, big boss fights and large projectiles flying across the screen.

The main difference is in the collection of power-ups and the light RPG level system that gradually unlocks better moves and gives the character more power. It’s a very easily exploited system; no one says you can’t repetitively grind through the Shopping District (second half of the first level), rack up $50 (Canadian, naturally – nice touch making the coins mimic actual Canadian currency, by the way) and max out your character’s attributes before setting out to tackle the second level.

By doing that, the game gets a lot less challenging. I didn’t quite go that far in my first play-through with Scott Pilgrim. I maxed out my strength but my defense was still weak and I didn’t have much in the way of hit points until the end, when I had $500 burning a virtual hole in my virtual pocket. Upping the HP made it a lot easier to beat the game without relying on the Streets of Rage style option of calling in reinforcements – in this case, Knives Chau – and after a few hours, there I was face-to-face with final boss Gideon Graves.

That’s not to say it wasn’t a fun journey, mind you. Having just read the books, many of the character references are still fresh in my head and the game benefits from author Bryan Lee O’Malley’s involvement. Sure, its just fan service, but getting the useless Mithril Skateboard for defeating Lucas Lee still elicits a chuckle. The story line is faithful to the books (more so than the movie, but that might be a point for another article), at least until the twist ending.

Now, I realize that we here at Unwinnable are not protectors of the Almighty Spoiler, but I won’t reveal the ending of the videogame to you, dear reader. I will, however, say that it had me laughing my fool head off.

Then I hit start right away to play through again as Stephen Stills.

Scott Pilgrim vs. The World: The Game by Ubisoft is available via Xbox Live Arcade (800 Microsoft Points) and PlayStation Network ($9.99). I played the Xbox version. Alone. *sob*

Totally Rad: ‘Back to the Future’ trilogy gets videogame-ified