When I first started writing this review, I felt like I was committing an act of horrible blasphemy here. Heresy, even. Why, I imagined that if this even made it past Stu, our intrepid editor, effigies of me would be burned for what I was about to admit to. Then Ian wrote all about Scott Pilgrim vs. his iPhone and survived. So I figure I’m safe.

Over the last four months, my gaming platform of choice has been…my cell phone.

It’s true. I have an Xbox 360, PS3, Wii, DS, PSP, Dreamcast and a decent MacBook Pro all hooked up and ready to go, but a good amount of my gaming has been on my HTC Incredible. I think it’s a time issue. Most cell phone games can be picked up and put down quickly, allow for persistent saving of progress, and I can sneak in a game while the wife is watching Rizzoli & Isles without commandeering the TV or leaving the air conditioning. It doesn’t hurt that there are actually some pretty good games for Android, including Radiant, a game so good that I had to get another beer at the bar because Stu couldn’t stop playing it. 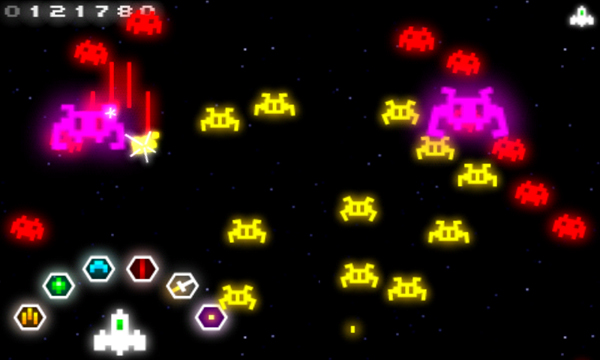 At the heart of it, Radiant is not too different from many other retro revival shoot-em-ups.  Monochrome yet brightly colored aliens creep (like Space Invaders), fire vertically, fly in patterns as they move into formation (like in Galaga) and occasionally leave behind power-ups (like Gradius). Sometimes, the action is broken up by an asteroid swarm (like in, well, Asteroids) or the opportunity to purchase additional weapon power-ups.

Where the game shines is not just in the presentation but in the humor. Simple captions pop up on the screen as you trade barbs with the lead creep (Him: “Show that human how to suffer!” You: “Yeah, show me some suffering.”)—a move that ends up giving both sides a good bit of personality. The captions tell a story that, for the most part, is more compelling than you would expect from a cell phone game and the addictive gameplay draws you back in for repeated plays.

Controls are simple yet intuitive—touch the right side of the screen to move right, touch the left side to move left, touch the ship to switch weapons. And unlike many other touchscreen-based action games, my thumbs never felt in the way of the action.

Perhaps the biggest drawback to the game is that the laser weapon is a bit overpowered, especially once maxed out. I’m a somewhat sloppy shmup player, but I had no problem clearing screens full of creeps in half a dozen shots once I powered my laser up to 10/10. In addition, the ending to the story is a bit of a letdown after all the action. Unlike modern shmups the game rarely descends into bullet hell, which could be a plus or a minus depending on your point of view. But as a fun, straightforward game, Radiant delivers.


Radiant was developed by Hexage Ltd. and is available for both Android and iPhone. Review is based on the Android version, available in the Android Market for $2.99, or as a lite version for free.