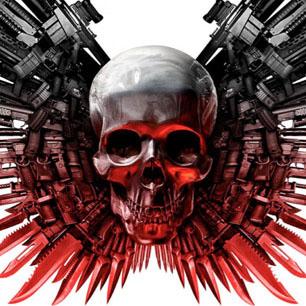 This summer has seen quite a few movies attempt to be something they’re not. Iron Man 2 was not a deep study on the nature of power and its ability to corrupt. Sex and the City 2 did not help you find that perfect pair of shoes. MacGruber did not make you laugh (OK, that’s probably because nobody saw it, but still).

The Expendables though…this flick doesn’t pretend to be something it isn’t. Want to see a bunch of over 40 action stars mix it up in a throwback to the 80s action flick? Here you go!

Honestly, I think the tag line, “A film by Sylvester Stallone” is the most misleading part of the movie. The Expendables is not a film; it is a human growth hormone, popcorn and cheese sandwich threaded through a projector.

It’s not a polished Michael Bay explosion-fest, it’s a dark, rickety roller coaster that may kill you. The Expendables is just like it’s actors; grizzled and old school. Some critics feel this lack of polish is a detriment to the movie, but I disagree. The grungy feel of Mickey Rourke’s tattoo shop, the humid island jungle and its accompanying rundown village provides layers as deep as the lines on Dolph Lundgren’s face. 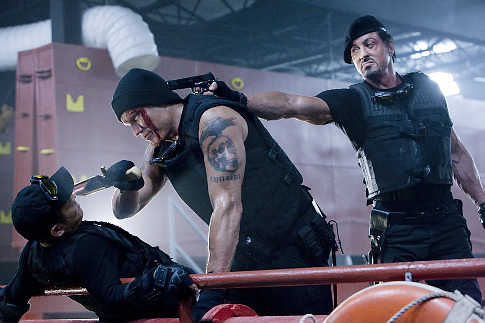 Some have also said the sheer number of heroes seem to be a bit of overkill. Stallone, Statham, Li and company have taken out their fair share of dictators and rogue ex-CIA agents solo. Sure, any one of these guys could have taken David Zayas’ two-bit thug dictator and Eric Roberts’ rogue ex-CIA agent out in the 80s, but now? Not so much. Life has hit them and it hit them hard.

As I mentioned before, Mr. Lundgren has certainly seen better days.  Hell, he mumbles most of his lines, but he’s still a badass who holds his own against Jet Li not once but twice!  Besides, it’s not like there was never an action movie with an abundance of badasses versus a single threat. Anyone remember Predator? Or Aliens for that matter? Eric Roberts is just as menacing as those creatures from beyond (he did menace Doctor Who as an incarnation of the Master). Sure, it is a one-sided battle, but that’s what viewers of this movie are plinking down to see.

And while it’s not a formula made for surprises, The Expendables managed to catch me off guard once or twice.

The biggest surprise of the movie is Terry Crews (best known as President Dwayne Elizondo Mountain Dew Herbert Camacho of Idiocracy). He handily steals the show from these venerable, muscle-bound men of danger by casually walking around, smiling, insulting Jet Li’s stature and, occasionally, blowing stuff up. Oh, and when he’s out of ammunition, he tosses around a straight razor. For a movie filled to the brim with fan service, it’s nice to see the new guy hold his own with the old favorites.

The Expendables is an unapologetic throwback to the 1980s action flick. While the glory days of the action hero are over, Mr. Stallone gives the audience a movie that shows these men are still heroes.

They can still take on an army and save the day – they just have to do it as a team now.

And that’s fine by me.

The Astonishing Banality of Cinematography in The Outsider