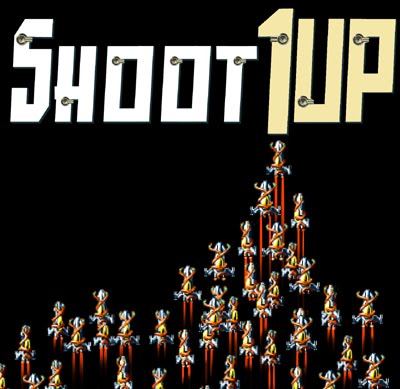 In the late spring of 1987, I went on a whale watching class trip to Provincetown, Massachusetts. There are three things that stand out from that trip: seeing whales, seeing my first transvestite and playing Time Pilot 84 in the hotel lobby.

The shoot ‘em up genre (also known as shmup) has been around since the earliest days of arcade game design. In Time Pilot 84, the player had the ability to move and shoot in all directions and with strong visuals designed to give the appearance of depth and motion this game stood out amongst its peers. Having included the ability to fight Nazis and aliens you have an arcade game recipe for success.

Like most modern games, the shmup has gone through many developments. Shoot 1UP, by Mommy’s Best Games, is an evolution of the genre that combines classic gameplay elements from Time Pilot 84 with the bullet hell style of Ikaruga.

And dear God, it is bizarre.

You command a ship known as a Phalanx through a landscape littered with dismantled giant robots, dead Orca whales and semi-nude fembot cyber women. Instead of bullets, the Phalanx hurls gobs of what looks like white viscous fluid at the enemy. 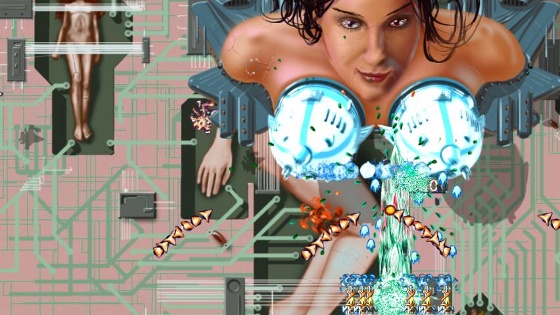 I should probably take a moment to admit I was initially drawn to the game because of the cheeky artwork and I have been known to have some lowbrow tastes. But while the oddball graphics border on kinky for parts of this game (you might blush if someone with a narrow frame of mind interrupts you), the game boasts solid mechanics.

The most novel feature of the game is its fleet system. Rather than save them off screen, every extra life you collect is added to your fleet for use immediately. By using the triggers, you can manipulate the ship formation and at one point I was able to have 14 ships under my control. A maximum of 30 ships can be controlled per player and with a two-player co-op, you can have 60 on-screen at once which makes for some seriously frenetic game play.

The artistic 2D platformer seems to be the darling of the industry now. Shoot 1UP may be a lot more Lloyd Kaufman than David Lynch, but it is still refreshing to see new, stylized takes on classic game genres.

Shoot 1UP is available from Xbox Live Indie Games for 80 Microsoft Points (the equivalent of one buck), a bargain for six frantic levels, stat tracking (amusingly name Score Trek), achievements and a variety of in-game awards.

Check out the free trial version of the game. After time ran out on the demo, I immediately unlocked the full version of the game and have already played through it several times. If summer has left you feeling as thought there is nothing out there for you and you need something to clean the stale gameplay off your palate, then Shoot 1UP is just what you need.

A Bug that Needs Exterminating