Peter Molyneux has a reputation for making grandiose promises that his games can’t possibly keep and of weaving nets of silky words that ensnare players into loving what a game could be rather than what it actually is. If that Peter Molyneux truly exists, though, he was not the man I met yesterday afternoon.

I was introduced to a soft spoken, charming fellow who had about himself an air of pragmatic self-effacement that only a certain type of Englishman can maintain without seeming insincere. After a brief introduction, the PR rep mentioned that I had picked Fable 2 as game of the year for 2008. Molyneux smiled and said, “These things are so much more nerve wracking when I know I’m in the room with someone who actually likes my games.”

If I had put Molyneux off his game, he showed no sign of it as he began to walk me through the features of the upcoming Fable 3.

He started off by reciting a laundry list of things he felt could have been better about Fable 2. Using a litany of words like rubbish, silly, gimmicky and dreadful he quickly dismissed experience points, status bars, 2D menu interfaces and the expression wheel. The common denominator here is that these are mechanics that, to Molyneux, somehow stand between the player and the meaningful, emotional connection he aims to provide for them.

The vehicle for that connection is, again, the myriad of choices Fable 3 offers and how their consequences impact the world. The most obvious place this manifests is in your weapons. Strike fast and your blade will develop a curve. Die often, it will become pitted and scarred. Be nefarious and it will blacken. The same goes for your physical appearance, your dog and the world around you. In some ways, this organic evolution replaces the standard RPG system of leveling up.

There were plenty of other things shown off, some of which I can’t discuss yet, most of which I can, but find myself feeling uncomfortable in doing so. Towards the end of the session, we were discussing the organic quality of the world of Albion and how, over the course of three games it has taken on a bit of a life of its own when Molyneux paused and said, “You know, there are things I want to just tell you, but I can’t. It will ruin the surprise.”

The Fable games specialize in delivering a sense of wonder that I think is largely absent in other games. So much of that depends on an individual player’s personal investment in the game world, and that investment can only truly develop from first hand experience. To me, that’s a surprise worth guarding.

Yet, strangely, in the first moments of my hands-on, something happened that seemed to be diametrically opposed to that personal investment. My character spoke.

In the previous games, my character was a mute who interacted by farting at people and dancing. It was a strange way to communicate, but it also ensured he never said anything that didn’t ring true to me. Giving my character a voice risks him becoming less me and more a Protagonist at a distance from me (as much as I loved Mass Effect 2, I am not Commander Shepard, but I very much was Butcher from Fable 2).

Molyneux explained it was necessary for the story. “When it comes down to it, the story in the last game was really quite forgettable, wasn’t it? There was a dog. And some kind of spire thingy. We’ve worked very hard to make this story much more memorable and to really fuel the drama, we needed a main character with a voice.” 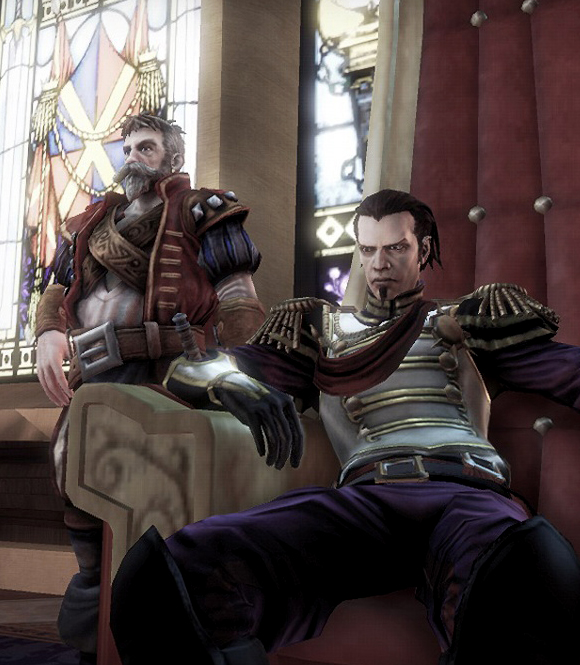 Over the course of the opening sequence, the drama was, in fact, more palpable and the verbal interactions served to make the rest of the characters in the world more vivid, but I remain somewhat concerned that Molyneux has removed so many of the walls separating players from the Fable experience only to build a new, sturdier one in its place.

Much of the good stuff from the previous game returns, expanded and streamlined. The dog is back, of course, as are wives and husbands. The freedom to have the occasional psychotic break is also intact.

Molyneux’s character led a barmaid up a mountain pass to look at the scenery and the beautiful sunset in the hopes it would make her feel romantic. It didn’t work and I remarked that at this point in playing Fable 2, I’d just give up and find a cliff to push her off of.

Sure enough, they were.

Molyneux’s appetite for evil (he remains baffled that the majority of players will choose to do the good thing even if the bad thing is more fun and profitable) is all in good fun, of course. Except when it comes to chickens.

Perhaps more than anything else, the Fable series has revealed Molyneux’s deep hatred for poultry. In Fable it was enough to simply be rewarded with the Chicken Chaser title for kicking the requisite number of the hapless avians but in Fable 2, the chicken fixation took a turn for the bizarre with the inclusion of the humiliating chicken costume and a side quest that involves smashing chickens against a magically sealed door. Molyneux’ distaste for the birds couldn’t be more apparent than in the opening cinematic of Fable 3 and after seeing it, I couldn’t help but ask after the source of his grudge. A small smile crept into his features, but I am unsure if it was wry or rueful.

When he was a baby, Molyneux explained, his mother would leave him in his pram in the garden, which happened to be quite near a chicken farm.

“I clucked a lot as a child. That led to a very unfortunate nickname in school which I still haven’t quite found the courage to reveal publicly.”

Rookie of the Year: Road To Rule