After I finally digested all those future releases at E3, this weekend I found myself on a bit of a vintage kick. Out of the dozen or so skill-testing, controller-throwing titles I fiddled about with, I found myself returning again and again to an old favorite: Exidy’s classic Venture.

I use the word favorite loosely because, believe it or not, few things terrified me as a child the way Venture did.

Venture was ported to ColecoVision from the arcade in 1982. Based on some family conjecture, I am fairly sure we welcomed the ColecoVision into our home some time in October or November, making me just shy of four years old, the perfect age for introducing scares that will scar a person for life.

The hero of Venture is Winky, a red, round smiley faced crossbow thing. Winky goes from room to room of a dungeon, killing monsters and stealing their treasures. The rooms are connected by halls patrolled by green, tentacled creatures predictably called Hallmonsters (Just about every other word in the manual and on the box is tagged as a trademark, including the difficult to look at Hallmonster). There are three floors with four rooms each that repeat, ad infinitum, until you finally lose all your lives to the ever increasing difficulty. 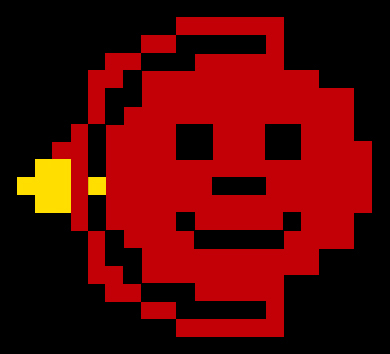 That alone isn’t scary, though trying and failing to shoot diagonally can make for some howls of frustration. I can also live with dead monsters still being able to kill you, but the fact that continuing to shoot them makes them stick around longer is bald faced quarter-greed.

The real terror begins when you spend too much time in a room (usually because the door is blocked by dead monster bodies). A threatening WHOOMP WHOOMP WHOOMP plays, signaling the appearance of a Hallmonster to punish your trespasses. Hallmonsters are bigger than Winky, faster than Winky, can kill him with a touch, can pass though walls and are utterly un-killable. But it was the sound, the ululation that heralded my imminent demise, that truly got me.

I remember this distinctly, being in the television room with my parents and some extended family (It may have been decades before the Wii again brought whole families together around a console, but it was by no means the first to accomplish that feat). We had played Smurf and Donkey Kong and now I was playing Venture. I tarried too long and the Hallmonster came in to its menacing music. I dropped the controller, covered my eyes and Winky, with no one to guide him out of peril, was promptly killed. I may have cried a little. I definitely didn’t play much of Venture after that.

A couple years ago, when I bought a new ColecoVision, Venture was on the top of my list of games to re-purchase (no one can adequately explain the disappearance of our original system) and get it I did, in the original packaging no less. Now, passing for an adult, I was able to play the game pretty well. My best game, I made it through the three repeating floors three times before the difficulty became too punishing.

But even then, even this past weekend, when the Hallmonster’s music played, my heart still leapt into my throat, if only for a moment.

Now for some reader participation. What is your earliest videogame memory? And while you’re at it, tell me what weird games have scared the pants off you – I know Silent Hill gave you the heebie jeebies, but if you can’t look at Kirby without shuddering, I want to know why! Take it to the comments or, if you’re bashful, drop me a line via the contact form in the navbar.

A Chronicle of Rage and Frustration