The comic book world got all shook up this week with the surprise redress of one of the medium’s most iconic female characters.

Wonder Woman, the dark haired beauty with golden bracelets, knee-high boots and ample… powers, was given some new modern duds. Some like them, some don’t.

I would have to give the whole thing a big thumbs down. Not just because it makes the powerful princess seem hipster chic, but it strips the voluptuous heroine of her sexuality.

I don’t know shit about her comic heritage.

What I do know is that what they’ve done to the character is baffling.

In taking away Wonder Woman’s sexuality, they take away her power as a woman.I get that for the most part, her overly-revealing character amounts to a comic geek’s wet dream. I mean, come on, her “uniform” is incredibly scarce and serves largely to highlight her massive bosom and curvy legs. I’m not denying this.

I’m also arguing that there’s nothing wrong with a female comic book character looking like that. Sure, it’s mostly men who design these creations, and sure, they are proportioned in a fashion that emphasizes what the average man looks for in a woman – physically, anyway.

But to deny that a woman’s power doesn’t come – at least in some part – from her sexuality is naïve.

And part of Wonder Woman’s strength, part of her attraction, and part of her power, was that she not only kicked ass and toppled villains, she did it all with physical strength and sexual radiance. And Wonder Woman never shied from her sexual nature, especially when she denied it. She recognized that her features were desirable, but she never cared. And she was well aware that it could have advantages.

However, with this new look, they’ve taken that away from her. The sexual confidence is gone, replaced with some male sense of fair play.

I’m not saying that Wonder Woman didn’t deserve better threads. Sure, give her a make over. Let her wear clothes that perhaps would make more sense in a fight.

But why take away the sexuality? Why redesign a classic hero with an outfit that is better suited on a self-conscious teenager from the 1990s?

Confidence and power in a person – man or woman – includes sexual confidence. And Wonder Woman in her very appearance oozed it. She radiated with power, both physical and sexual. It made her intimidating and desirable all at the same time.

I recognize that what I argue can’t be divorced from the notion that Wonder Woman was likely designed with a sense of sexist dogma. And perhaps to women, she represents a man’s fairy tale female. A throw back to decades where respect for women lacked credibility.

But I don’t see that. Her power comes from being a woman. That’s part of her heritage, her character. She doesn’t need men, rarely seems to even want them, because she is woman and she is mighty and she can kick your ass. 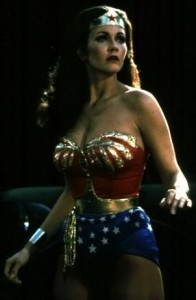 Yet I will argue that Wonder Woman had respect. She not only had it, she earned it, by being a hero and sexual and strong and scary. She was easy to look at but impossible to touch.

Let’s not forget that all-in-all, the male superheros are no less sexual. Superman in his skin tight outfit, Batman with his deep voice, each of them all ripped with chiseled muscles. Come on, women fall over themselves to be with these dudes. All superheroes represent the perfection of the human form, and that comes with a sexual desirability.

Wonder Woman may have looked sexual, but she was no less powerful and present. She had substance and purpose, strength and dignity.

Covering her up only serves the idea that a woman who is sexually confident and unflinching is wrong. That somehow women who want respect need to be reserved, conservative and plain.

When you change her outfit, you redefine her nature. Her character. Like Greedo shooting first altered Han Solo. And I think with this new outfit, they have taken something away from her. Weakened her. As if somehow she is now shying away, instead of remaining in your face with her boldness and presence.

That’s not Wonder Woman, and it shouldn’t be.