It isn’t news that seeing an artist live, especially when their work has had deep personal meaning for you, can be a transformative experience. The performance, and being present in the moment of it, is remarkable for its transience. It can be recorded, sure, but your wobbly iPhone video will only vainly attempt a resurrection. It will stir mere sense-impressions in your memory – the way the light hit your eyes, the way the sound vibrated in your skin – but what it summons, in the end, is only a ghost.

I’ve seen artists live before. I’ve seen artists that are special to me live before. But in May 2022, the fateful concurrence of a certain wave of online discourse with the start of Mitski’s Laurel Hell tour made me especially reflective. When I saw her at last, we were several weeks into the tour, several weeks into the backlash over her simple request that fans put their phones down for a moment to connect with her during her performances.

I walked into the venue already tightly wound to bitter distaste over this. On Twitter, Mitski had thoughtfully described live performances as an opportunity for connection, a brief miraculous moment of being alive at the same time. She wrote that when fans watched her through a screen, she felt like she was deprived of that connection, instead being consumed as content. A deeply human, deeply public admission, which sparked a disproportionate reaction that only confirmed its premise.

Surely at least part of the business of art is that of connection: of encouraging it, facilitating it. How ironic, then, that self-proclaimed fans of an artist would be so disconnected from her humanity. Then again, the idea of art as business at all begins to get to the root of the issue.

Connections are political, and so is art. I’ve always disagreed with the idea of art as “universal”; I know that my encounter with a piece of art will never be exactly the same as another person’s, even when remarkably similar. And Mitski’s work has always struck a very specific resonance with me. When she sings of alienation, of yearning, it feels to me like it’s whiteness she’s yearning for. Not only in broad strokes, but in specific shapes and colors, even discrete shades. Mitski makes me think about how, before I ever yearned for a person, I yearned to be white.

I feel it isn’t a coincidence that she and I are both women of color. Songs like “Your Best American Girl”, “Strawberry Blond” and “Goodbye, My Danish Sweetheart” offer an immediate concern with whiteness, Americanness, even Europeanness: desiring it (representing an ideal of beauty and belonging as it does), yet inevitably, painfully alienated from it. Desire is politically shaped: I often catch myself longing more for an ideal than for a particular person. And yet this means that the people I long for are very particular: women that resemble that ideal of beauty which I, as a racialized lesbian, simply never will. 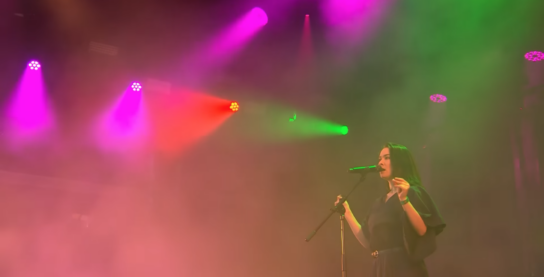 That being said, I also catch myself projecting onto Mitski based on her art. While listening to her music makes me feel chillingly known, at the end of the day she doesn’t know me, and I don’t know her. But it feels like it, right? I suppose that’s what makes parasocial relationships so compelling: the connection evoked by another person’s art can feel tantalizingly close to being known. Perhaps, though, it’s only as close as watching it back on your phone.

At the end of the day, my experience of Mitski’s art is still only one experience. Furthermore she’s an artist: I shouldn’t assume she’s necessarily writing from direct experience, or assume I know anything about her based on her music. Art is, after all, as much an exercise in crafting as in vulnerability. It’s work.

On the other hand, some fans are killing the author not in the literary sense, but in a far more troubling one. They are neglecting to see her as a human being at all, with desires and needs of her own, capable of expressing those needs to them as fellow human beings. In this light she becomes merely a vessel: emptied of humanity, desired only as she can be used to fulfill the desires of others. Ironically a recurring theme in her work. I find it no coincidence, again, that she’s a woman of color.

Mitski isn’t the only artist to be dehumanized in such a way, of course, and many others have spoken of their feelings about the strangeness of being commodified. That concurrence between art and capitalist work is partly where our problem lies: if art is increasingly treated as a product to be consumed, the artist often becomes a worker alienated from their work. Like all labor, then, the labor of creativity is distributed unequally along the lines of race and gender.

When I see Mitski for myself, I am tip-toed, leaning this way and that, reaching for an angle to see her over that glowing phone screen-sea. Scrambling for a moment of connection, interrupted by wave upon wave of sharp blue light. In these frantic moments, when I see her face, and the flurry of her arms and legs, I feel at once elated and desperately alone. I feel that I am witnessing both searing vulnerability and immense guardedness. A mask of protection that one could hardly blame a performer from having.

But I catch myself projecting, again. As I watch Mitski grip her microphone like a knife to drag across her throat, there’s a sinking feeling in my stomach. She sings of working, living, dying for the knife – things I feel I know all too well. The knife can be many things, of course, as can the work. But perhaps, for her, the work is this performance, and the knife is me.

Sara Khan (they/she) is a freelance writer and co-founder of Game Assist, a multimedia project exploring liberation and politics in gaming. Their work aims to center marginalized perspectives, and to explore how media shapes culture (and vice versa). Find them on Twitter here.

Gremlins in My Toys

A Tale of Two Relics