This is an excerpt from the cover story of Unwinnable Monthly #157. If you like what you see, grab the magazine for less than ten dollars, or subscribe and get all future magazines for half price. 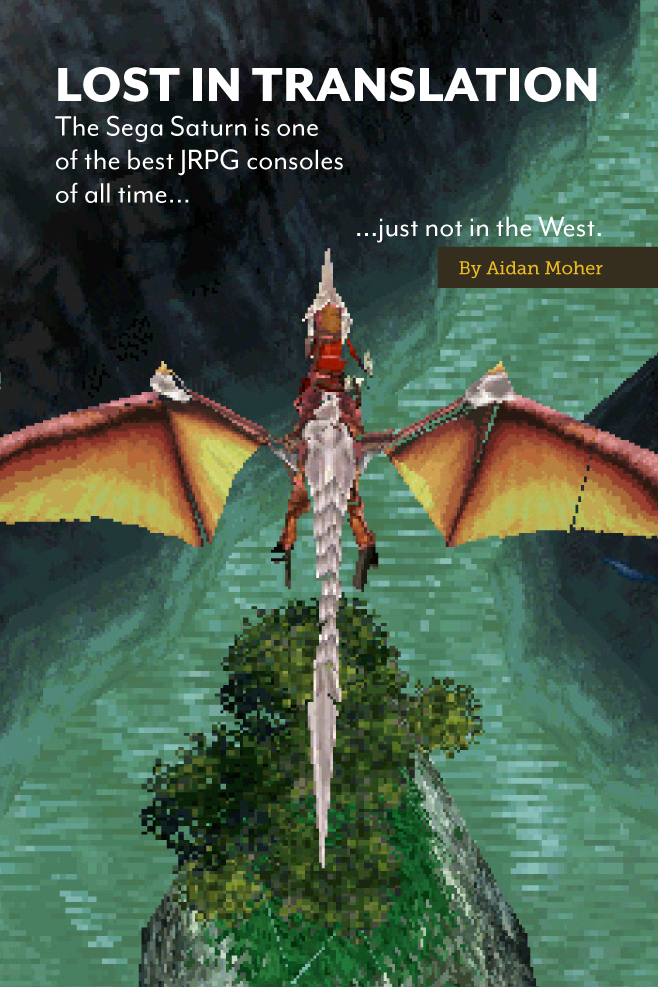 When you think of the Japanese RPG golden age, it recalls the 16-bit era, led by Nintendo’s vast stable of classics like Earthbound and Chrono Trigger, followed by the PlayStation’s dominance of the 32-bit era when Final Fantasy VII set the genre on a meteoric course for worldwide superstardom. It was a transformational time for Japanese roleplaying games, and created millions of lifelong fans in the process.

We all know how Sega played proud second fiddle during the Japanese RPG arms race of the 16-bit era, but what if I told you Sega, not Nintendo, was home to the second-best library of JRPGs during the 32-bit era, too?

“But, Aidan, the Saturn was a huge flop, has barely any JRPGs, and the ones that do exist cost, like, a million dollars.” 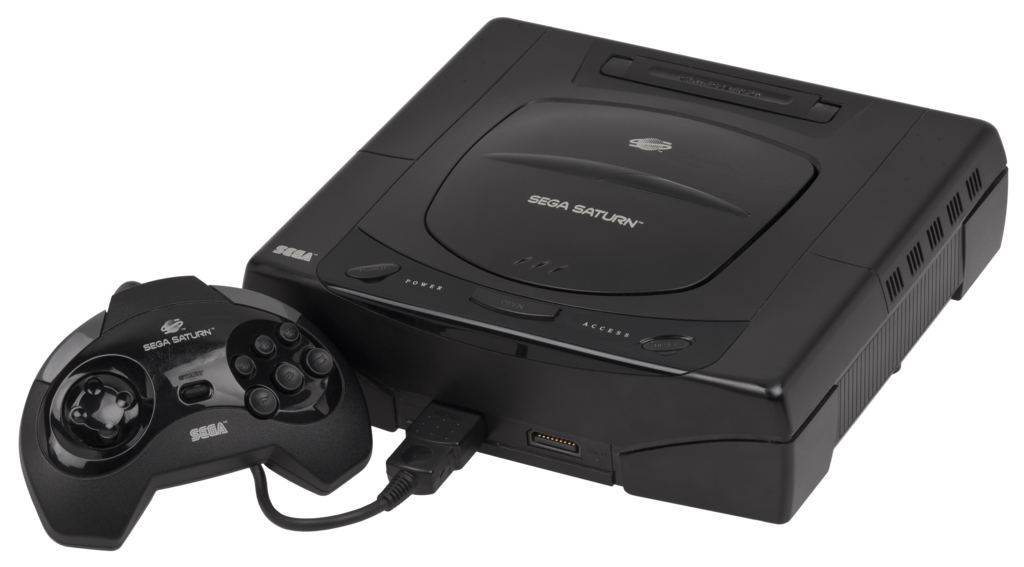 No one will argue that the PlayStation trumps the Nintendo 64 and Saturn – and pretty much any other console in gaming history – with its avalanche of amazing JRPGs. It’s got quality and quantity with titles like Final Fantasy VII, Xenogears and Breath of Fire IV among the impressive list of exclusives. While the Saturn couldn’t match Sony’s quantity, it delivered high end quality titles for Japanese RPG fans, even if you only consider the games that reached Western shores. Couple this with the Sega Saturn’s popularity in Japan and Sega’s successful courting of many developers who weren’t ready to make the jump to 3D, and you had the perfect recipe for a library of bold, experimental JRPGs that offer an experience unique to the console.

With its emphasis on 2D technology, the Saturn was the perfect home for the late Rieko Kodama’s Magic Knight Rayearth, an action-RPG take on the popular manga from Clamp. It’s bright and effervescent, and perfectly accompanied by a saccharine and cheeky translation from late-90s localization darlings Working Designs. Boasting equally impressive 2D graphics was Ancient’s The Legend of Oasis – a sequel to the Sega Genesis’s Zelda-clone, Beyond Oasis – which featured huge sprites and a world brimming with interesting locales accentuated by great art and animation. While Zelda was making the leap to 3D thanks to Ocarina of Time and Majora’s Mask, The Legend of Oasis was a balm for players who preferred 2D exploration. Albert Odyssey: Legend of Eldean, also published by Working Designs, featured traditional Japanese RPG gameplay, striking 2D artwork, started life as a Super NES game and scratches the itch of players looking for something more familiar after Final Fantasy VII pushed the genre into new territory.

Late in development, Sega shoehorned 3D tech into the Saturn in an attempt to compete with the PlayStation, leading to great (if ugly) entries in their flagship Shining Force series with Shining Force III and a 3D dungeon crawling-spinoff called Shining of the Holy Ark. But the white elephant in the room – perhaps the Sega Saturn’s most infamous game – is Panzer Dragoon Saga, a $1,200 game that actually earns its price tag for reasons beyond just rarity.

Based on Sega’s popular Panzer Dragoon rail shooters, this unique take on JRPGs introduced one of the genre’s most unique combat systems, which features just the singular protagonist, Edge, riding his infinitely customizable dragon and an Active Time Battle-like turn-based combat system that focused on positioning mechanics. Its story fleshes out the series’ evocative, melancholy world, creating a feeling that blends Hayao Miyazaki’s Nausicaä of the Valley of the Wind and French artist Mœbius’s instantly recognizable artwork. (So much so that Mœbius did the cover art for the Japanese release of Panzer Dragoon.)

With flagging sales, and a new game console on the horizon, Sega sent Panzer Dragoon Saga to die in the West, reportedly shipping only 20,000 English copies of the game (compared to approximately 10M worldwide sales for Final Fantasy VII). Critics were impressed, but even at release it was so difficult to find that Sega ran an ad in gaming magazines making light of the situation: It featured a cutout mask of Edge’s face under the tagline “For those who can’t find Panzer Dragoon Saga see below.” In the intervening years, its legend has grown, along with its price tag, which, at the time of writing, is over $1,000 for a complete-in-box copy on the secondary market. 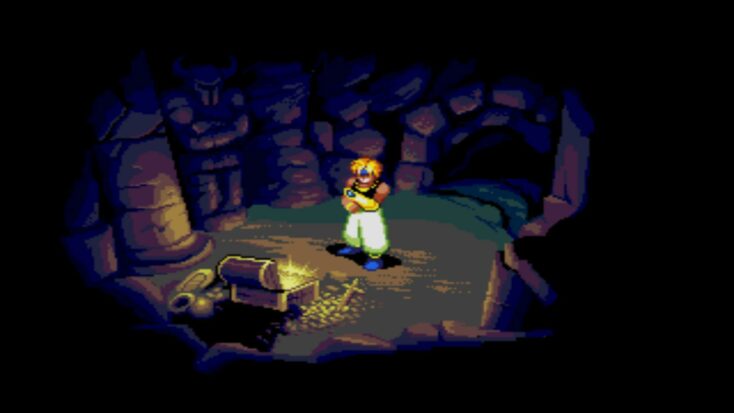 The Saturn was rife with amazing games, including JRPGs, which were exploding in popularity at the time thanks to Square’s success on the PlayStation. So, how did Sega’s JRPG-friendly console die at the exact time it should’ve thrived? A lot of miscalculations and a games industry shifting dramatically thanks to the arrival of newcomer Sony and their emphasis on cheap hardware and software.

“By the time [Panzer Dragoon Saga] came out in 1998,” explained  Ben Lindbergh in a fabulous retrospective for The Ringer called “The Ruinous Road of Gaming’s Missing Masterpiece,” “Sega of America was well into the depressing process of shrinking from a boom-time total of 2,200 employees to . . . a ‘skeleton crew’ of 200. The Saturn, Sega’s powerful CD-based successor to the Genesis, had lost the latest round of console wars to Sony’s PlayStation and Nintendo’s N64, sunk by a steep $399 launch price (roughly $650 in today’s dollars), a rushed release on the heels of Sega’s market-cluttering 32X Genesis add-on, a lack of third-party software support (exacerbated by the system’s difficult-to-work-with dual CPU), and the absence of an original platformer starring Sega mascot Sonic.”

3D was taking off, especially in the West, and despite best efforts from Sega to beef up the Saturn hardware for 3D games, it wasn’t a contest. The console was floundering all around, due to many of the reasons outlined by Lindbergh above, but especially with JRPGs because, just like Nintendo, if you didn’t have Square, you didn’t have the JRPG crowd.

But, if you look closely at the Japanese Saturn JRPG library, you’ll notice that many of the best 2D JRPGs from the PlayStation – including Lunar: Silver Star Story Complete and Grandia – are there, and often offer the definitive experience. Now, decades later, those games are available to English-speaking players thanks to a robust fan community dedicated to making official and unofficial translations playable for the first time.

Aidan Moher is the Hugo Award-winning author of Fight, Magic, Items: The History of Final Fantasy, Dragon Quest, and the Rise of Japanese RPGs in the West and editor of Astrolabe. He’s written for outlets like Wired, Kotaku, and Electronic Gaming Monthly, and more. Sign up for his newsletter.

You’ve been reading an excerpt from Unwinnable Monthly Issue 157.

The Rapists of Immortality