This all started when I was at what I had thought was going to be a sort of comic book swap meet. Turns out a game store that was going out of business was also clearing out its inventory there, which meant that I went to a comic book sale and walked away with almost nothing but board games, miniatures, and dice. There are worse things.

Anyway, one of the games that I picked up was called Monster Mayhem. Hard as it is to believe – given who I am and what I do – I had literally never heard of the game before I saw it on the table at that event. When I bought it, I had no idea what to expect from it. I didn’t even read the back, really. All I had to go on was the cover, which is great, and the title, which is pretty obvious Orrin-bait.

Imagine my surprise, then, when I got it home and discovered that it was actually manufactured by White Wolf. For those who didn’t live through the ‘90s – or who, perhaps, spent them more responsibly than I did – White Wolf is a now-defunct company best known for their tabletop role-playing games such as Vampire: The Masquerade, Werewolf: The Apocalypse, and so on.

How to describe those games, for someone who has never played them? They were very silly in a way that took themselves very seriously. Everything about the goth nightclub scene that was blossoming in the ‘90s distilled down to an RPG that emphasized angst and brooding. They were very much of their time, is what I’m saying, and they also pretty thoroughly dominated that time, at least where the RPG market was concerned.

Monster Mayhem, as you might guess from the title, isn’t much like them. It, too, is very silly, but in a much less self-serious way. It does share some similarities with those titles, though. As in White Wolf’s various role-playing games, Monster Mayhem sees you taking control of a monster in a present-day city. There are five options in the box, each of which has its own strengths, its own weaknesses, and its own desires, which determine what kind of victims it craves.

Zombies eat brains, of course, vampires drink blood, werewolves chew bones (sure), mummies harvest organs, and ghosts collect spirit. Each of the monsters also has a starting lair that matches their specific niche: graveyards for zombies, haunted houses for ghosts, museums for mummies, etc. Once you’ve picked your monster, you stake out the city and wait for victims to show up, which they inevitably do. 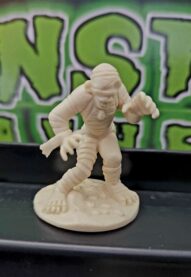 The monsters are represented by cartoony little plastic miniatures, while the victims are represented by tokens or chits. Each monster’s specific cravings mean that different victims will give you more bang for your buck than others. You might think that everyone has more-or-less the same number of bones and organs, for example, but you would apparently be wrong about that.

Monsters can stalk and slay victims, while victims attempt to escape according to randomized but pre-programmed movements. Monsters also interfere with one-another, fighting if they end up occupying the same space, or playing “weakness” cards that can trigger the specific vulnerability of each creature of the night.

The board is made up of a large, hexagon-strewn map representing the city, randomized for each game by where specific tiles are placed, representing locations like the monsters’ various lairs, as well as zones where victims can reach safety. As for the victims themselves, well, that’s where this being a White Wolf game from 2007 comes in.

The RPGs White Wolf made were known for catering to club culture and for not shying away from “adult” topics including drug use, sex, and so on. Of course, the maturity with which they addressed these topics varied from product to product. Despite its cartoony demeanor, Monster Mayhem is no different, and its approach is… not exactly sensitive, even for 2007.

Each victim has a moniker that is made up of an adjective and a noun or two. So there are obvious horror staples like the “buxom co-ed” or the “absent-minded professor,” as well as inside jokes like the “brooding goth.” Unfortunately, there are also victims like the “back-handing pimp,” the “x-addled raver,” the “bling-flashing player,” and the “strung-out crack whore.” Their artwork and stats are every bit as respectful and sensitive as you might expect from those names. 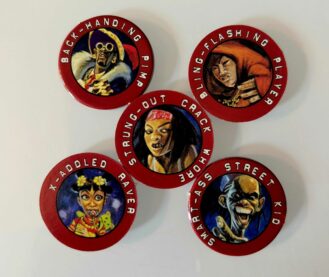 Its approach to social issues isn’t the only place where Monster Mayhem feels dated, either. 2007 was a different time, after all. Before the board game boom that we currently enjoy had fully caught us up. Yet even in 2007, it seems like this probably felt like a game from another era. After all, Monster Mayhem’s contents look… I hesitate to say cheap, but certainly not expensive, in a way that you would basically never see in a game today.

The five monster minis are fine, the chits and things fine as well, as such things go. The board is basic, without much in the way of adornment, but it’s serviceable, albeit hard to use without any indicators of numbers or rows for the hexes, leading you to spending a lot of time counting. And, as mentioned, it is huge.

The instruction booklet, on the other hand, is little more than four sheets of black-and-white paper, with no illustrations and the text crammed as tightly on the page as it can manage. In spite of this relative brevity, however, fully the last page-and-a-half is occupied by an extensive sample turn breakdown. It also includes the following advice: “As a rule of thumb, declare the action you’re about to perform and count to three or ask aloud, ‘Anyone want to f*#k me up?’ before resolving it. That keeps the game fun for everyone.”

The problems with this are probably self-apparent, but there’s another one: Monster Mayhem isn’t really all that much fun for everyone… or anyone, actually. It’s basically what they call a “roll and move” game, in which you are given remarkably little control over what happens, and very few opportunities to strategize your turn.

You can trigger your monster’s ability, spend “craving points” to re-roll dice, and mess things up for other players, but for the most part, you’ll be limited to moving and hoping that you land where a potential victim is. There’s sadly not a whole lot more to it than that, leaving Monster Mayhem a forgettable (and mostly forgotten) relic of a period when time had already left it far behind.

They’re Coming Out of the Goddamn Walls: Reliving a Moment with Space Hulk
Previous Post