This feature is a reprint from Unwinnable Monthly #155. If you like what you see, grab the magazine for less than ten dollars, or subscribe and get all future magazines for half price. 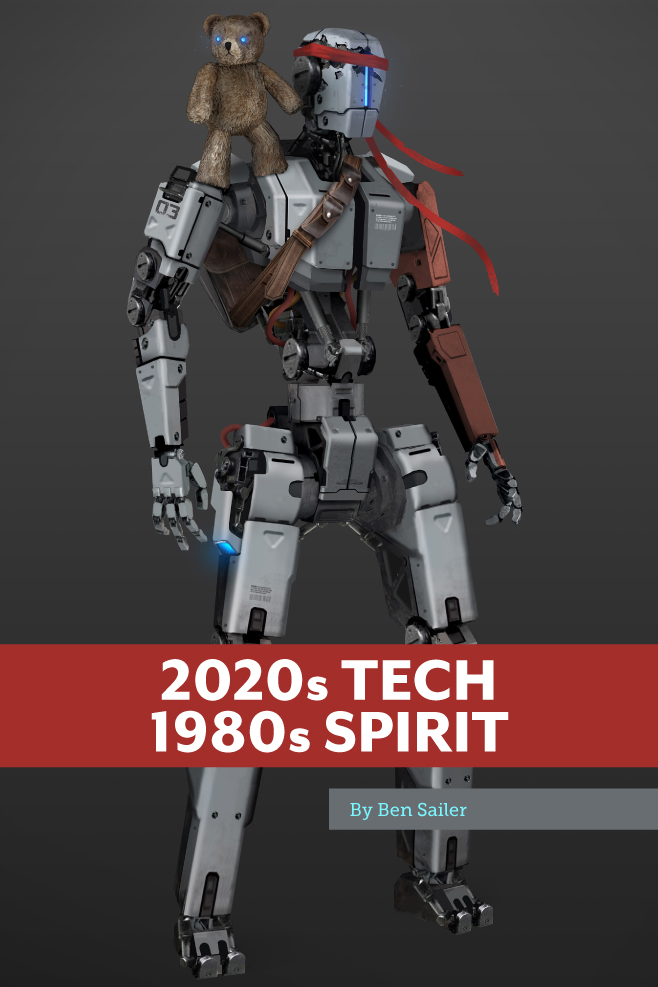 1980s pop culture responded to economic and socio-political tension with a mix of escapism and excess. The decade’s tendency toward over-the-top bombast extended from the mainstream down to the underground, where hardcore punk and hip-hop gave voice to the disenfranchised, comics like Teenage Mutant Ninja Turtles and Watchmen showed the medium could be edgy and successful and action films like Terminator and Mad Max envisioned bleak futures. It was also a time when geek culture crossed over and broke through to the masses, led in part by a nascent videogame industry.

For Dykom Software founder and developer Mike Garn, the 1980s have long been a source for inspiration. When you look at the Steam page for his forthcoming title Arksync, an innovative side-scrolling twin-stick shooter starring an animatronic teddy bear and his war robot friend, it’s at once clear which eras of pop culture have influenced his work. The game’s bold block font logo, RoboCop-esque protagonist, and pixel art aesthetic sit at the intersection of ‘80s arcade action and 16-bit era platforming. 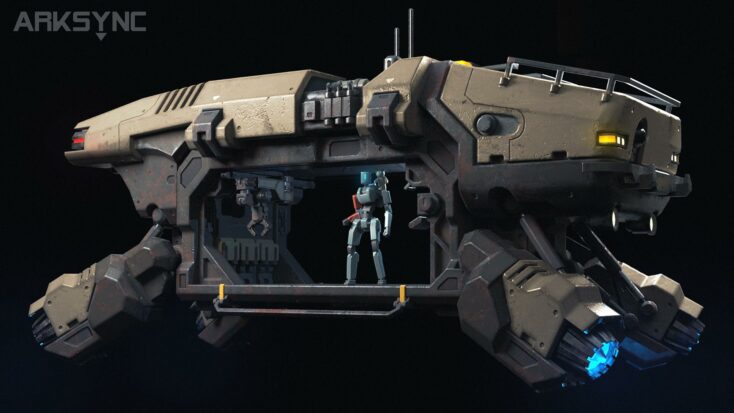 Cynics may say ‘80s nostalgia has grown stale. Between the diminishing returns that come with each new season of Stranger Things and the wealth of indie shooters that have flooded the market, some potential players might dismiss Arksync as another retro retread. That would be a mistake. Not only does the game put several interesting twists on time-tested tropes and mechanics, but it also promises to be the beginning of something much bigger, and it’s only going to get weirder from here.

“I’m building a connected universe of games and stories, and early on I had to ask myself what could I work on for the rest of my life. I found the answer in things that have always inspired me and always will: the ‘80s and dark science fiction, with a little bit of goofiness.”

Garn started drawing his own game design documents when he was a kid in the early 1990s, taking inspiration from the previous decade’s geekdom. Later in his teen years, he set aside game design to play in garage bands and pursue the rock and roll lifestyle.

Garn couldn’t stay away from his original dream of making games though, and in 2012, he started working in the videogame industry as a concept artist. He’s worked on some of the biggest franchises in the business since then, with a portfolio that includes megahits like Call of Duty, Apex Legends and Prodeus. That kind of resume is nothing to scoff at, but while he valued his time working with major studios, he wanted more creative control. So, he took the leap into the world of indie game dev and hasn’t looked back. 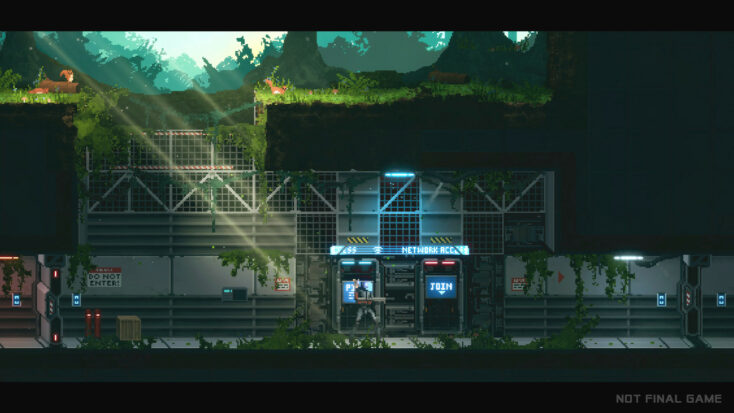 “I love working on these big AAA games, and I’m really grateful for that experience, but it lacks the creative control I’m interested in,” Garn says. “I’m motivated because I have a lot I want to say through videogames, things I wish would have been a part of my life sooner, but at a company I don’t own I’ll never get to say any of it.”

Given a basic understanding of Arksync’s core premise, it would seem fair to question how much depth there could be behind the game’s message. The game tells the story of a robotic kid’s toy named Robby the Bear, who gets lost in a dystopian mechanical hellscape. Determined to be reunited with his owner, he reprograms a war robot to help him fight hostile enemies and find his way home through the post-apocalyptic wasteland. It’s a classic tale of a robot befriending an, erm, more murderous robot.

On the surface, this plotline might sound like a paper-thin excuse to blow stuff up. But when Garn says there are things he wants to say through the game, he’s being sincere. Underneath the comic book-inspired ridiculousness of it all, there’s a genuine desire to connect with players on an emotional level here; if you can relate to feeling out of place in your surroundings while facing challenges with impossible odds, this story is for you.

“Robby the Bear is a small robot children’s toy, and he survives in a world where what he’s designed to be seems impossible to be,” Garn says. “When the world changed around him it didn’t leave a place for robots like him. Yet he’s resilient about being what he was designed to be. I think on some level a lot of people can relate to that, not just me, and that inspired his character.” 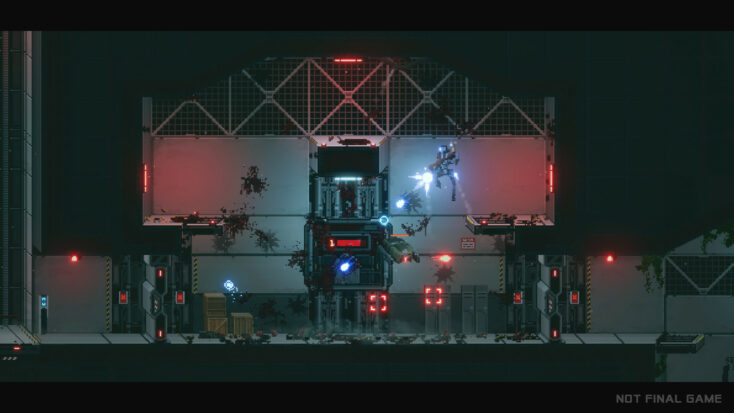 Garn doesn’t want to be too prescriptive about what players should take away from their experience with Arksync though. Instead, he prefers to leave room for interpretation.

“I consider the player within and outside the game a lot,” Garn says. “I have specific hopes, but I think saying it out loud might add an exception or interfere with any unique insights someone needs. I hope players find their own meanings within the game, something real. Making someone’s life even a little better, even for a moment, or giving them something to think about, that’s what I want.”

The balance between absurdist humor and emotional resonance is exactly the type of thing that Garn is drawn toward. However, it’s also the type of game that a large studio might be hesitant to greenlight (which is why Garn took the independent route). However, for someone switching to a solo operation after working with triple-A budgets and tools, lack of access to resources and software could be creatively constraining.

Fortunately, Epic Games stepped in with support on both fronts. They saw enough potential in Garn’s vision to name him an Epic MegaGrant recipient for Arksync, providing much-needed financial support to complete development on the game. Unreal Engine’s accessible UI also helped ease the transition, with its visual interface proving particularly helpful.

“I’ve never felt a reason to get diagnosed but I’m pretty sure I have a mild form of dyslexia,” Garn says. “Unreal’s Blueprint scripting language is all visual based, nodes you connect together, and has made it so I can code without the frustration of missing or adding stuff with traditional code . . . Unreal Engine and the team at Epic Games are incredible and have made Arksync possible.” 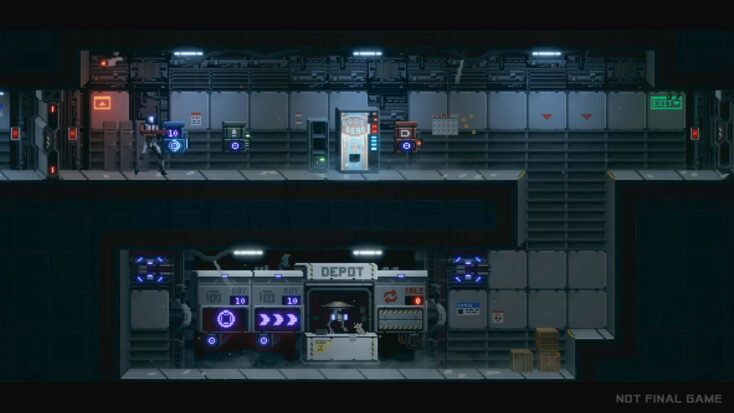 While Arksync isn’t the first twin-stick shooter to adopt a side-scrolling perspective, it doesn’t have many close peers, as the genre has historically used overhead camera angles that allow easy multi-directional movement across a horizontal plane. For players that associate twin-stick controls with classics like Robotron 2084 or the more recent Enter the Gungeon, it may be difficult to envision how such a control scheme would translate to a side-scrolling shooter.

How exactly does Arksync make it work, then? The answer is a combination of unique physics and movement options. This is where the game promises to deliver its most innovative twists on time-tested design concepts, and the way Garn explains it, the game almost sounds like it could create its own subgenre.

“I almost see Arksync as 1.5D movement because the gravity creates movement limitations in the vertical axis,” Garn says. “You can’t just run up or down, only jump or fall. That changes everything, and in response I’ve added a generous jump, double jump, dodge, and ledge clambering. That upgraded movement makes up for that limited vertical axis. It makes it a new experience I hope people will find refreshing.”

It should also help that Arksync is being designed to accommodate different playstyles. While its central gameplay loop is built around gaining energy from defeating enemies, which can then be used to make purchases, players will have some latitude to decide which types of character upgrades (which are permanent) and weapon upgrades (which dissipate upon death) to choose. Utilities like grenades and shields can also affect how the player approaches combat from offensive and defensive vantage points. 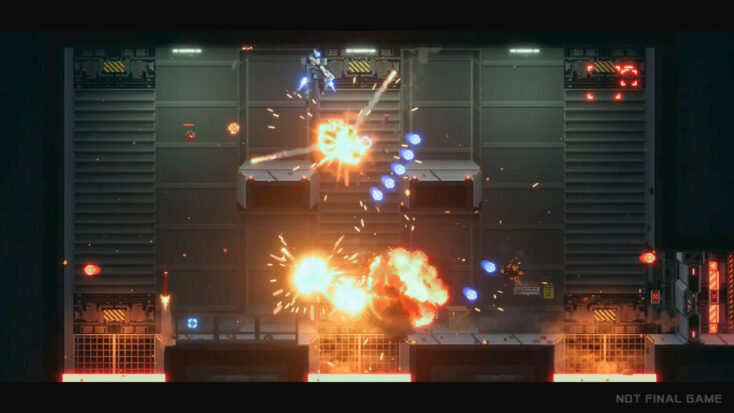 With that said, Arksync won’t be for the faint of heart. While players will be given plenty of weapons and equipment to navigate its treacherous terrain and fierce enemies, there will be no handholding when it comes to figuring out how to use them. It’s up to players themselves to figure out their own sense of flow, something that may have been influenced, in part, by Garn’s experience as a musician.

“I’ve spent so much time with music it’s kinda how I see everything, like Neo seeing the Matrix . . . but minus bullet time,” Garn says. “I see rhythm, balance and melody in everything. Imagine a song you can’t hear, but can somehow see, touch or feel; and imagine it still being just as inspiring. That’s what I aim for.”

Players will get their first taste of Arksync when its first public demo is released during Steam Next Fest in February 2023. Garn is then aiming to release the full game on PC shortly thereafter, with Nintendo Switch and Xbox Series S|X versions to follow. That won’t be the last that players hear about the broader Dykom Universe though. While Garn is keeping the details close to his chest for now, he promises the game is just the introduction to a much larger and inter-connected franchise waiting to be explored.

“This isn’t going to be the kind of franchise universe people have come to expect,” Garn says. “The Dykom Universe is different, weirder, committed to its rules and designed to be connected up. It wouldn’t do it justice to say where the Dykom Universe is going, it really just has to be built and experienced.

Revving the Engine: The Artful Escape of Francis Vendetti

Finding The On-Ramp To Route Zero