Spirit Hunter: NG is a horror visual novel that understands the importance of letting your audience feel safe and comfortable before digging a knife into their belly.

Set in the same universe (but five years after) as its predecessor, Death Mark, this visual novel follows a completely new cast of characters. The overall story plays out in a similar manner to the original: the main character abruptly gets dragged into a series of supernatural investigations he must solve within a specific timeframe, otherwise a curse will kill him horribly. Most of the cases center on local folklore or ghost stories floating around the online message boards of 1999 Japan, meaning that follow-up and thorough investigation under a tight deadline is largely impossible. The player’s only recourse, therefore, is to directly search the scene of the hauntings (and often, murders) for answers.

Initially, the game offers the reader less of a creepy vibe and more a Scooby-Doo adventure.  The main character, Akira Kijima, investigates urban legends and internet rumors of ghostly activity alongside his friends. Having the chief investigators be buddy-buddy teenagers adds a layer of playful comradery to what ought to be a dark and discomforting horror story, letting the audience relax as they come along for the ride. The end goal of all these investigations is to solve the hauntings, defeat the big bad, and retrieve Akira’s cousin, who was abducted early on in the story. In short, the atmosphere is one of a spooky but hopeful adventure. The player experiences the usual combination of close calls and tense battles as each case progresses, but ultimately comes out unscathed and watches the group emerge victorious.  Everything is fine and dandy…right until the teenagers lose one case. And oh, do they lose it badly.

The original Death Mark game ensured the player never truly has a chance to let their guard down by constantly changing not only the location of the hauntings, but the allies your character brings along.  There is no time to develop friendship with your investigation team, no certainty that a specific person’s skills or talents can be used on a subsequent case. But Spirit Hunter: NG takes a different approach to unsettling its players. You’ll spend hours of playtime with Amanome and Hazuki at your side, learning about their personal lives and building bonds with them through several cases before the main antagonist rips the rug out from under their feet. Losing your team has weight and pain because you had time to develop attachments to this confused and scared band of kids. The game makes you care before it brings down the ax; you haven’t lost a random Joe, you lost people that mattered. It’s a tactic designed to hurt, and it works. 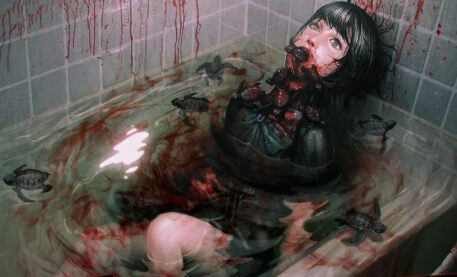 Thereafter, every case that Akira takes on carries a new level of anxiety with it. Having new sidekicks on subsequent missions offers little comfort. Once you’ve experienced the first loss, it’s impossible to shake the feeling that more death could be on the way. Each case brings the possibility of a terrible end for you and your new friends, even if you do everything right. The bodies continue to pile up as Akira suffers even more losses, with the odds of him making it out alive getting worse and worse.

The core of Spirit Hunter: NG is about turning the safe and mundane into something sinister and dangerous. While Death Mark tended to center its cases in abandoned buildings or dank sewer systems, Spirit Hunter: NG offers locations like popular lakefront parks, urban neighborhoods, even a modern office building that’s still in use. These are places which are supposed to feel ordinary and secure because people frequent these areas every day, and with little fanfare. It’s not a burned out schoolhouse or a dilapidated asylum where the very location inherently puts you on edge. You’re not meant to be hunting for ghosts in a cubicle farm, so why would you be worried? Your defense is lowered here, and the local ghosts are more than happy to take advantage of that. 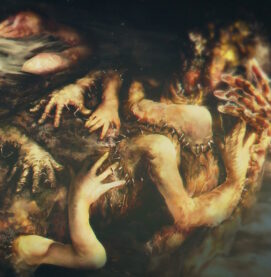 That said, sometimes this visual novel can be less frightening and more outright frustrating. Spirit Hunter: NG makes it painfully difficult to solve a case to the spirit’s satisfaction, further increasing the risk that your actions are destined to get other people killed. Some of the cases can be solved by recalling specific hints or clues at the right moment to chose the best weapon or say the right phrase, but other routes to get the “good” ending sincerely felt impossible to get on first playthrough without a walkthrough on hand.  Save spots are hard to come by, so the (many) failures you’ll encounter are difficult to redo. Is it worth the work, to go back and try to save those people? Or do you take the loss and move on with the hope that maybe next time, maybe you can save a few more souls?

Spirit Hunter: NG is available on Switch, PS4, and PC. If you liked the original Death Mark but want a slightly different twist on the type of horror it offers, you’ll enjoy this.

A Dog and Her Friend and the Lockdown in Between