Queer Man Peering Into A Rock Pool.jpg takes place on an island where everything isn’t quite right. Islands of bright pink rock float in a bright pink sea, with tiny rock pools home to sparkling clusters of crystal and static, affectionately referred to as “chunkies”. Enormous, unmoving ibises dot the land, and at the center of it all is a house with only one room.

Our protagonist – the eponymous queer man – questions some of these things. The ibises are unusual, but the chunkies are friends, and he can’t quite put a pin on what exactly needs fixing up about the house. The chunkies are a step, though, as under closer inspection they transform to other objects. On the first day, two take the shape of a storage ottoman (“I want to say Moroccan?”) and a pear, which he fails to recognize entirely. 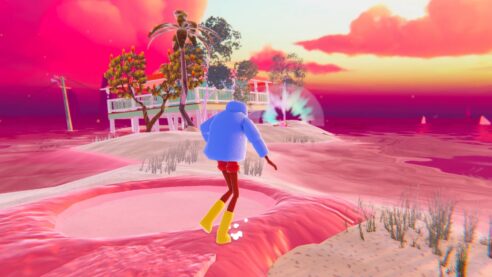 As someone who knows what a pear is, it feels at the beginning like my role as the player to help him piece things together. I’m working in tandem with the island itself, or part of it, which is referred to as ‘Admin’. The doors to the house close themselves behind the protagonist to chivvy him on to his tasks, and the skies above him dramatically shift hue when they’re finished to coax him back home.

The protagonist good-naturedly accepts his lot. He complains as cheerfully as he chats to the chunkies that silently roll behind his feet – with the kind of air you might talk to your pets, or apologize to something you knocked off a shelf. He doesn’t remember walking this far to check his post (as Admin has moved his postbox to a nearby islet), but wow, look at that moon.

His acceptance of his vulnerability appears to create a dynamic where the world acts, and he reacts – until it doesn’t. The pear goes moldy, and he realizes that it wasn’t a decoration, it was food. In fact, he’s hungry, so the house to his surprise suddenly has a kitchen. But the cabinets are facades, and the fridge summoned from a chunky is pear-shaped – and it’s the protagonist who realizes that this isn’t exactly right. 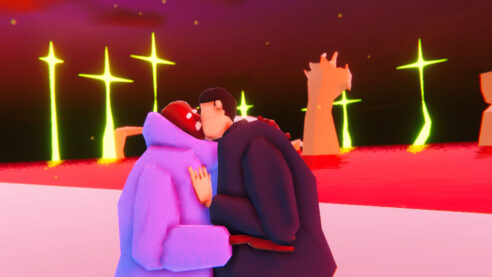 When he didn’t fully remember the ottoman, or recognize the pear, it seemed like the chunkies were being produced at him. But there’s another step here – the admin doesn’t intuitively know what a kitchen does or a fridge is, it’s just responding imperfectly to a need. They’ve both been communicating with each other the whole time, with mismatched tools, and his influence is necessary too.

Like with the changing tides, and the pitching skies, the perspective retroactively shifts. The protagonist’s good humor isn’t just self-compassion for an overwhelming situation, but a way through to stewardship. He is as vulnerable as he seems, but he’s also needed, involved in a strange, beautiful kind of teamwork that can see them rebuild. “Welcome to the world,” he says at the start of the game, to a chunkie at his feet. “It’s a little bit broken at the moment, but I think it’ll come together.” Not as a hope, it emerges, but as a purpose.

NORCO Is A Connected Web Of Estrangement
Previous Post

Ape Out and Value