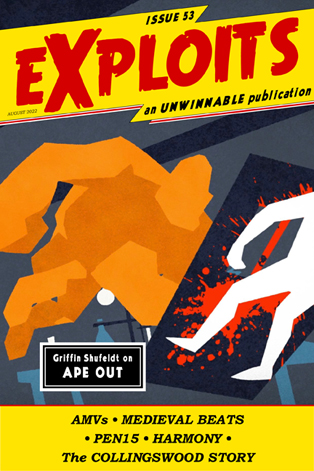 This is a reprint of the Games essay from Issue #53 of Exploits, our collaborative cultural diary in magazine form. If you like what you see, buy it now for $2, or subscribe to never miss an issue (note: Exploits is always free for subscribers of Unwinnable Monthly).

Cymbals crash, colors fly and textures dance as you frantically move through Ape Out’s abstract representations of ordinary environments. The 2019 game is straightforward about what the focus is: There are no complicated controls, no real story – just pure improvisational gameplay backed by visual and audible candy. While the game’s premise is simple – you are an ape who, believe it or not, is trying to get out – the substance lies in its style.

The visuals seek to provide a stage for the simple, but engaging, gameplay. The textures of the wall, floor and everything in-between are constantly in motion, enveloping you in an atmosphere of perpetual chaos and progression. The abrasive, flashing, on-screen text drives you while barreling towards the exit, followed by sirens and other audio cues. The abstract silhouettes quickly become intuitive as you’re reeled in.

The music stalks you in Ape Out. It follows and reacts to your every move; every wall crashed through; every guard thrown; every environmental change. You’re an adventurer and the soundtrack is an extremely loud – but witty – narrator. The seemingly disconnected environmental ambience somehow feels at home in the spontaneous soundtrack. Gunshots, broken windows and doors swinging open fit right in. At times, they may even provide the fulcrum for subsequent changes in the music. The game is extremely aware of this dynamic and the importance of its soundtrack, expressing each of its four levels as if they were an album – each getting a cover and volume, keeping to its theme of knowing its style, and capitalizing on it.

For all of the things that Ape Out is, there is one thing that it’s not: bloated. You may even complete it in one adrenaline-filled sitting as I did. When I finished Ape Out; when the final level was played; when the last song began and the credits rolled (in an amazing sequence of events that I won’t spoil), I was thrilled that it had ended that early. But, you may ask, why?

Found inside mainstream game reviews, video essays and, yes, even the depths of Steam community reviews, there’s a somewhat ubiquitous metric: the money spent/playtime ratio. Ape Out, being 15 dollars and lasting about 2 hours, does not perform well in this metric, and so you may be put-off by the idea of not getting the best “bang for your buck.” While this is a very understandable perspective, it’s also a somewhat misguided one. When we go to the movies, watch a TV series or read a book, do we criticize purely by its length? Quite the opposite. We may even applaud a piece of literature, or a movie, to make its point in a timely, punchy manner. Additionally, this way of looking at games causes us to overlook valuable aspects of it that don’t happen to extend their playtime.

While Ape Out isn’t a huge epic journey, its soundtrack, visuals and gameplay are really something special. And while the elements it excels at don’t make it longer, it’s still worthy of the purchase because it does those things so well in a compact, charming way.