The first Pixar movie to play in theaters since the start of the pandemic, Lightyear spins off from the Toy Story movies to reimagine the titular action figure as the real deal – a true astronaut in a more grounded but still sci-fi world with a graphical face-lift and audio switch to MCU juggernaut Chris Evans. But it’s not the first time a depiction of Lightyear as an actual Space Ranger has landed on the screen.

On TV screens, Buzz Lightyear of Star Command premiered in 2000 and followed the adventures of veteran ranger Lightyear and his team of rookies – Princess Mira Nova, experimental robot XR and the boisterous Booster (BLOSC from here on out because it’s a mouthful). They clashed with the likes of Toy Story’s Emperor Zurg, made into as real a villain as Lightyear had been turned into a real spacefaring hero (at the time of writing, Zurg himself looks set to get his own face-lift in the new Lightyear movie with some enigmatic hints of his appearance in trailers). Other members of the rogue’s gallery included characters made only for the show like the newbie rangers: Lightyear’s ex-partner and current criminal Warp Darkmatter, XR’s older and estranged brother-slash-previous-prototype XL and the physics-defying Gravitina.

And then there was NOS-4-A2. The robot vampire that fed on the energy of other robots as self-aware as him, and other forms of non-sentient technology – but he always had the predatory instinct to hunt down the former more often than not.

I think it was my father who explained the pun of the name to me, telling me about Nosferatu: A Symphony of Horror (if not him, then maybe I learned about it from early iterations of the internet). Nosferatu was a 1922 silent German Expressionist film with an urban legend that its lead actor was a real vampire. It was also an unofficial adaptation of Dracula, something like a nascent fan film. NOS-4-A2 is a cleverly digitized homage to that original vampire, and he predates the 2013 book and its 2019 TV series adaptation of a similar name – NOS4A2 instead of NOS-4-A2 (it’s a little underwhelming to read that in comparison to a robotic vampire, this book and its TV adaptation refer to a license plate number, even if it’s owned by a supernatural being). 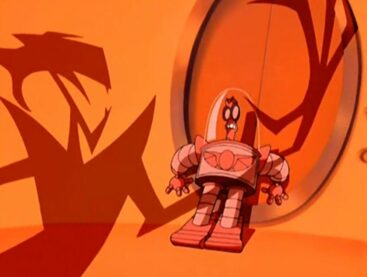 I definitely remember my father telling me how later there was a movie made based on the creation of Nosferatu, with a neat story-within-a-story that focused on its infamous urban legend. Called Shadow of the Vampire, it featured a fictionalized account of filming the original movie. In it, the actor with the amazing makeup was actually a real vampire that struck a deal with the movie’s overly zealous director. I’ve never seen the movie; it sounded a little too freaky for me and my weirdly specific and low threshold for horror (fine with bursts of it in Western cartoons and anime, even enjoy it; in contrast, I will never watch something like The Thing). But just hearing its premise always sounded neat, like a short oral story; and its casting intrigued, with Willem Dafoe as Nosferatu himself, the vampire-pretending-to-be-a-human-actor-in-terrific-makeup.

In retrospect, Nosferatu is a reference likely to fly over most kids watching BLOSC in the 2000s, but undoubtedly fun for the show’s creative crew to make and probably neat for any adults who happened to watch and knew that bit of pop culture history to understand what was going on. It also provides a rewatch bonus for anyone revisiting the show after watching it years ago. But for me, it was another neat element that made NOS-4-A2 my favorite when I first saw the show. It was incredibly niche knowledge that I was privy to, that I incorporated into my belief that the energy vampire was the best part of the show. He had the look, he had the attitude, he even had the pop cultural-historical references. And he had the voice, with former late-night talk show host Craig Ferguson giving a performance that ranged from smooth to spooky goofy to menacing when he wants to be. NOS-4-A2 even had animalistic sound effects like literal roars and piercing shrieks to further emphasize his carnivorous nature. Despite being a robot, he was also fascinatingly treated like a carnivorous beast. 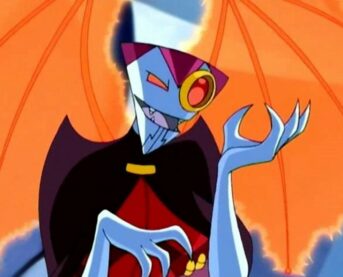 When he first arrives in his titular episode, NOS-4-A2 feels so starkly different from what’s been seen in the show so far. So inhumanly slender and triangular, with too thin a waist and everything ending in something like a triangular tail or the very long tip of a spindle top. He’s some subtle curves and so many sharp edges with claws and fangs, but don’t have to worry about pricking a finger on him – blood’s not his thing. Other robots have more to fear from the prick of his fangs literally drilling in and sucking them dry.

His waist ending in a tail or spindle top – at the end of the day, NOS-4-A2 has no legs. There’s no need, as electric wings crackle to life, drawn with the jagged waves and faint luminescence of electricity. They help him swoop down on robotic prey, but not organics if he can help it (unless they’re wearing some high-tech suit he can drain and hack, bringing it under his control for an unnerving puppet effect). The show takes clear delight in having a scene where he misjudges a bite on an organic and immediately tosses them aside, moaning how he loathes blood.

At least, that’s from what I recall of his intro episode. And bizarrely enough, as of this writing I haven’t found a copy of it on YouTube though I could’ve sworn it was there before. As TVTropes puts it, Keep Circulating the Tapes – because there’s been no official home release for the show outside of a DVD of its premiere framed as a one-shot movie. Perhaps the new Lightyear movie will see the show finally arrive on Disney+ for streaming alongside other old animated spin-offs.

The energy vampire’s other episodes are on YouTube though, last I checked. While my memories of BLOSC as a whole have grown vague, NOS-4-A2’s appearances stick out more because he was my favorite. I can look back on those memories and feel like things generally got darker when he showed up.

NOS-4-A2’s most brutal moments come when he finally meets his end, going out with a literal bang. In “Revenge of the Monsters,” the energy vampire fittingly teams up with other mechanical throwbacks to classic monsters: the previously mentioned XL, also a Frankenstein-like robot due to his body made out of a mishmash of spare (or stolen) parts; and Wirewolf, a space ranger named Ty Parsec that NOS-4-A2 turned into a werewolf cyborg via a cocktail of his own bite and the influence of an irradiated moon. Creating Wirewolf was an accident – the energy vampire had meant to only bite the ranger’s space suit – but it’s something NOS-4-A2 later uses to literally fuel his biggest scheme yet. 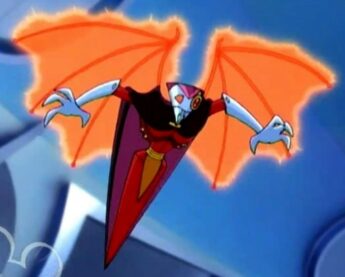 He escalates to brutally using Parsec as a living battery to power a machine that can transform the entire galaxy into Wirewolves too. Is the energy vampire making an army like his creator Zurg made and used? No. NOS-4-A2 crows that the entire galaxy will be turned into machines existing only to feed him before emphasizing his point by immediately biting one of his own robot minions just standing guard.

He’s in top form as a malicious villain: callously using Parsec for his own ruthless agenda; gradually shifting from barely keeping the ruse of a false alliance up with the naive XL to more comfortably and gleefully pretending to be his comrade even as he’s undeterred from eventually devouring him too; and taking his carnivorous appetite to new heights. NOS-4-A2 is metallic gluttony personified as a lean predator with a ravenous and insatiable hunger.

And then he ends as brutally as he lived, ripped to pieces like other robots he’s hunted.

An admittedly larger-than-expected explosion virtually takes down the energy vampire’s base of operations, and NOS-4-A2 emerges with a startling amount of damage – a jagged stump of sparking metal where one of his arms used to be. He’s never been so visibly damaged before. It was a shock for me in 2000 that drew my attention ever closer because it was a novel thing for me to see on TV. And then Parsec the Wirewolf satisfyingly gets the final blow, which ends up adding to the shock factor as he throws NOS-4-A2 aside – and accidentally impales him on a sharp spike of debris (maybe not so accidental, maybe he was aiming, but Wirewolf’s not talking). Impalement seems like it should be obvious for any sort of vampire, and BLOSC has actually done it before with NOS-4-A2 in another episode – but this one is far more impactful, more detailed and more severe. The show even takes a moment for NOS-4-A2 to scream in agony and also look uncharacteristically solemn as he silently looks down at the spike piercing through his chest, before he just. Explodes. To pieces, and that is it for NOS-4-A2.

No other villain gets such a send-off on BLOSC. NOS-4-A2 is the only villain in the show to pretty much get close to literal killing (he had a very voracious appetite with his fellow robots, even if some of them were brought back from the brink) and only one to get literally killed himself. It’s just another part of why NOS-4-A2 was the best part of the show for me. Most brutal villain in it from beginning to end, even in how he goes out. It would be interesting if he came back in some shape or form through more Lightyear media. Sometimes I kind of wish he’d been made for something else where he could’ve stretched his wings more instead of being left in a spin-off for a Pixar-Disney property that doesn’t have an official home release. Yet there’s still something neat about him getting anything at all under the circumstances. Given his vampiric namesake, existing within some sort of spin-off from something else is actually fitting.

Gamer’s Handbook of the Marvel Universe