This feature is a reprint from Unwinnable Monthly #145. If you like what you see, grab the magazine for less than ten dollars, or subscribe and get all future magazines for half price. 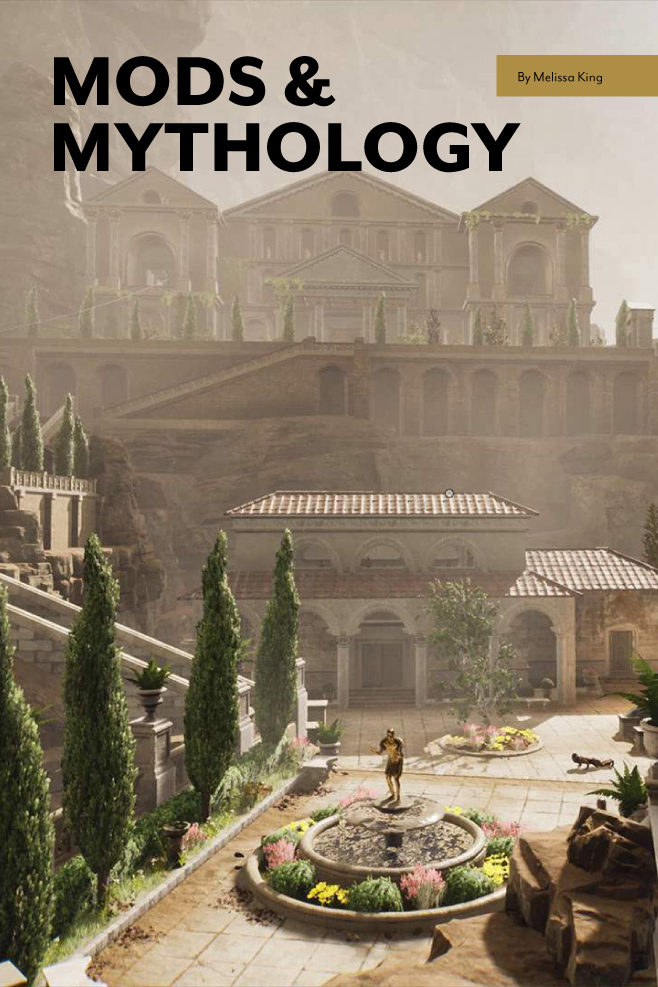 Besides its tendency to publish on multiple platforms, Skyrim is best known for its moddability. It has more than 66,000 mods on NexusMods, making up a staggering 20% of the popular modding site’s library. Skyrim Special Edition accounts for another 40,000.

There’s a Skyrim mod for everything. If you want to improve your UI, you can beef up your world map with more details and hand-drawn roads. Consider yourself a “no gods, no masters” modder? Start a cannabis farm.

You can also experience original quests, environments and storylines through Skyrim mods. One of them has an Australian Writers’ Guild Award and a critically acclaimed game based on it.

The Forgotten City tells the story of an ancient Roman city with a curse: When one person commits a “sin,” everyone who lives there dies. The player travels 2000 years in the past to figure out what destroyed the city using their power to wind back time. They must interrogate the locals and loop back through time to solve the game’s mystery.

Released in July 2021, The Forgotten City received high critical acclaim and positive player responses. The PC version has a Metacritic score of 85 and user score of 7.7. More than 2,800 Steam reviews rate it Overwhelmingly Positive. The Forgotten City’s console versions had a similar reception. 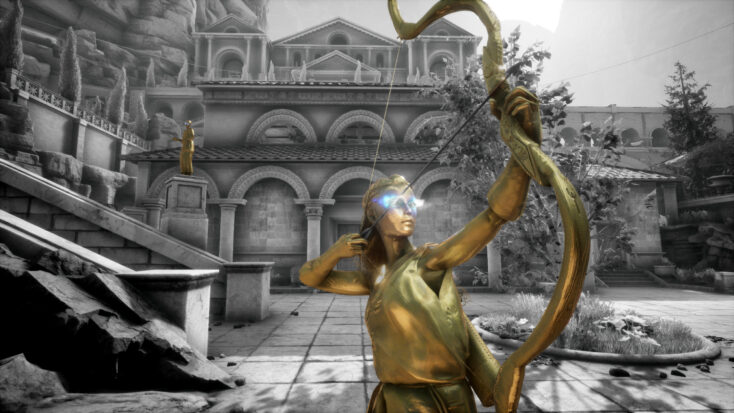 Believe it or not, though, this successful game had humble beginnings as a Skyrim mod. It started out as then-lawyer Nick Pearce’s first mod. When he wasn’t in the office, he’d work on expanding The Forgotten City. Back then, the mod hadn’t picked up any Roman influences. Instead, it featured a fantasy city deep in the underground of Skyrim.

Pearce got into modding when a Fallout: New Vegas mod transformed his perception of the scene. “Back in 2011, I played a mod called New Vegas Bounties by a modder called Someguy2000, and it was a revelation to me that a mod could be used as a vehicle for world-class storytelling and voice acting. So, I decided to have a go for myself, and when the next big RPG [Skyrim] came along, I started modding, hoping to write an engaging and philosophical story for intelligent adults, and never looked back!” Pearce says.

Over its development lifespan, the mod gained a full voice cast, an original orchestral soundtrack and more than 3.7 million downloads. Pearce loved making The Forgotten City so much that he decided to leave his ten-year legal career to turn his mod into a game through his own videogame studio, Modern Storyteller. He says, “I think videogames are the ultimate storytelling medium, and our mission is to make captivating games which engage players’ heads and hearts at the same time.” 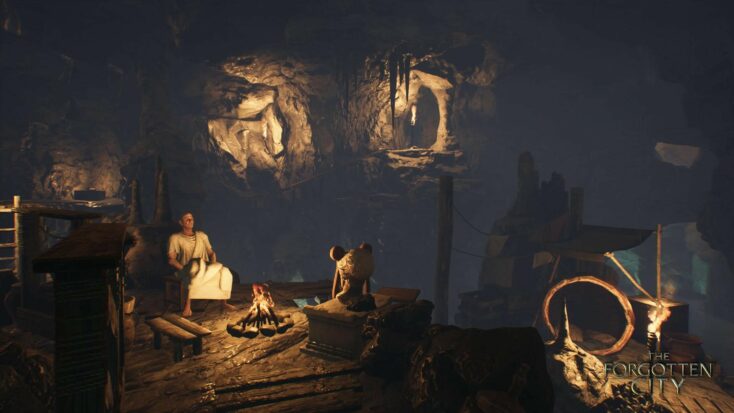 Player feedback influenced The Forgotten City’s development from its first days as a mod to its full-fleshed videogame. Pearce says, “For a long time, I read every single comment mod users made about the original mod so that I could understand what people liked and didn’t like about it. And so, for the stand-alone game, I tried to implement that feedback where I could.”

But, having so many people to share input also means having many people to impress. The Forgotten City’s transformation from mod to game brought a unique challenge related to fan reception. Millions of people already played the mod. What would push them to play the game based on it?

“For that reason, I knew I had to make the stand-alone version better in every way, and add plenty of new surprises,” Pearce says. He worked 80-hour weeks for four and a half years to completely revamp The Forgotten City for old and new fans alike. (For the record, Pearce stated in another interview that he doesn’t encourage this kind of crunch for anyone else – he’s surprised he could even manage it.) This long stretch of work resulted in a new setting, engine, quests, endings, mechanics and characters. He also rewrote the script to be twice as long with fresh twists. “We essentially kept the name and premise and levelled up everything else, all in the name of giving fans of the mod the best possible version of The Forgotten City,” Pearce says.

Pearce’s hard work seems to have paid off for his original supporters. Looking at the reviews and social media posts by fans of the original mod, they seem to unanimously prefer the game. Pearce says, “That’s a huge relief!” 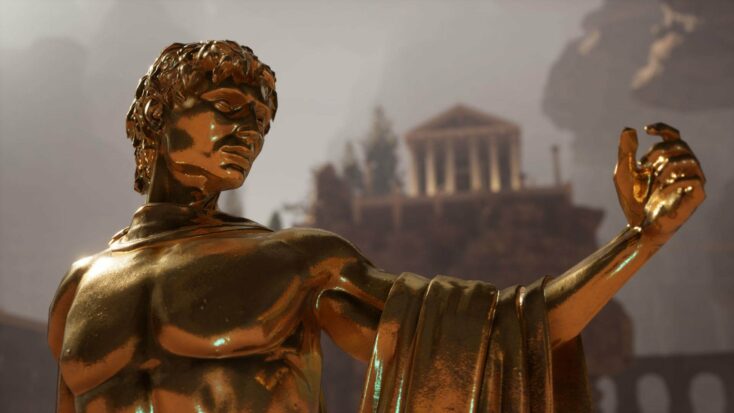 Even with Pearce’s fierce dedication to his work, he needed support to handle such a huge undertaking. When The Forgotten City began transforming from mod to game, Pearce knew he’d need to expand his solo operation. “I enjoyed working alone but building a stand-alone game from the ground up is about 10 times harder than making a mod for an existing game. If modding is like renovating a house, game development is like building a house from the ground up.”

So, Pearce brought on programmer Alex Goss and artist John Eyre to the Modern Storyteller team. Thanks to their specialization in their fields, Pearce could improve the game’s experience and visuals. Plus, it gave him more time to focus on what he truly cared about: the game’s story.

Pearce had plenty of positive things to say about Goss and Eyre’s contributions to the game. Together with Pearce, they make Modern Storyteller the studio it is today.

“[Goss] did the work of a team of programmers over 4.5 years, and for that reason, I often refer to him as a one-man-army,” Pearce says of The Forgotten City’s programmer. “I remember coming up with crazy ideas, and asking him things like: Can we add a golden bow which causes people to become entrapped in molten gold until they become a golden statue, and then make it topple over and clank onto the floor? And I’d never seen any of that done before, and it’s crazy complex, so I assumed it was a pie-in-the-sky idea. But Alex replied coolly: ‘Yep.’ And then he just did it. There were a lot of moments like that.” 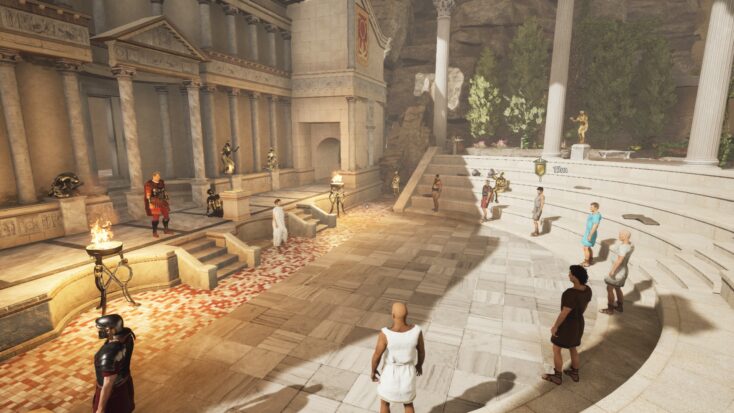 Meanwhile, Pearce highlighted Eyre’s commitment to historical accuracy. “[Eyre] is a wonderfully talented artist with a real passion for ancient history. Every 3D model he added to the game was based on a photograph or description of a real, period-appropriate artifact from the ancient world. He also has a great sense of humor, as evidenced by the fact he persuaded me to let him add an historically authentic public toilet to the game, complete with Latin graffiti and a communal cleaning stick.”

By founding Modern Storyteller, Pearce hopes to fill gaming’s lack of intellectually stimulating stories. “Essentially, I was just trying to make the kind of game I wanted to play. At the time, it felt like videogame stories were pitched for a very general audience, and there weren’t many stories which respected the intelligence of gamers or catered for those who enjoy thinking for themselves. I wanted to change that,” he says.

One of the greatest inspirations for Pearce’s storytelling approach came from Fallout: New Vegas’s vanilla game. The Vault 11 questline, written by Obsidian’s Eric Fenstermaker, tells the story of an election with a dark premise. “It was a fascinating tale about a darker side of the human condition, which the player had to work to unravel by exploring the ruins of a vault, and the chill it gave you at the end was intense,” Pearce says.

When someone plays The Forgotten City, Pearce hopes they’ll feel a similar emotional and intellectual impact. He aims to deliver a fulfilling time travel experience full of twists, turns and philosophical exercises. So far, this philosophy seems to have come through to players of the full game. “My Twitter DM feed is full of people telling me how much they loved the canon ending and how it made them tear up, and I hope everyone gets to experience that!” Pearce says.