This is an excerpt from the cover story of Unwinnable Monthly #144. If you like what you see, grab the magazine for less than ten dollars, or subscribe and get all future magazines for half price. 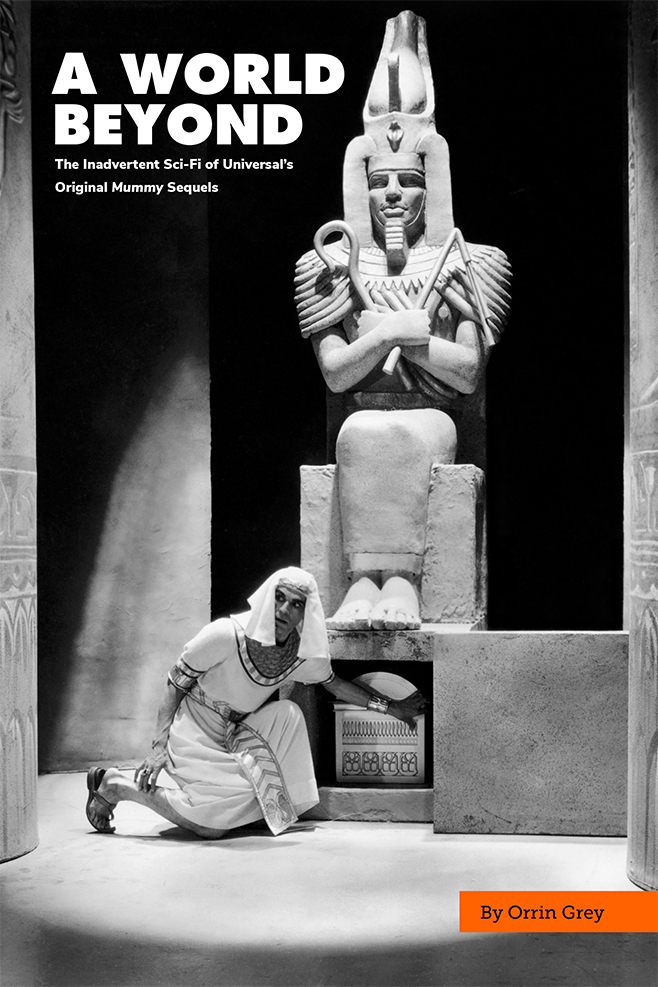 Unlike Dracula or Frankenstein, the original Universal Mummy movies of the 1930s and 1940s – resurrected by Hammer in the 1950s and 1960s and rebooted by Universal not once but twice in recent decades – didn’t have a single ur-text from which to draw. While mummies were omnipresent in the anglophone public consciousness, thanks to highly publicized finds like the (re)discovery of the tomb of Tutankhamun in 1922, no specific narrative formed the backbone of mummy-related fiction.

There was Bram Stoker’s 1903 novel, The Jewel of Seven Stars, which formed the partial basis for a number of later films, but the earliest known account of a mummy coming back to life is in Edgar Allan Poe’s satirical short, “Some Words with a Mummy,” from 1845.

Poking fun at, among other things, the notion that the Western world was, at that time, the height of scientific and intellectual advancement, the story is far from horror. The mummy, when revived, merely chastises the gathered men for their abuse, and shares with them cigars and wine while they engage in the eponymous conversation.

Film rarely, if ever, followed Poe’s tack. With the exception of the suave and sinister Imhotep, played by Boris Karloff in Universal’s first foray into mummy movies, most of the mummies on film were somnolent, shambling, and silent for many years. Even when they started talking again, in later decades, they tended to have resurrection of one sort or another on their mind, more than the casual conversation of Poe’s story.

Unshackled from a particular narrative, the Universal movies of the 1930s and 1940s were free to make up whatever mummy stories fit their fancy. In 1932, that consisted of an individual, Imhotep, who had loved the wrong woman and, as punishment, been buried alive. Resurrected by an over-eager archaeologist translating and reading the words of a life-giving scroll, Imhotep spends ten years integrating into modern life as a historian named Ardeth Bey, while he attempts to find the woman he believes to be the reincarnation of his forbidden love, Princess Anck-su-namun – most of which should sound fairly familiar to anyone who has seen the 1999 reboot starring Brendan Fraser and Rachel Weisz. 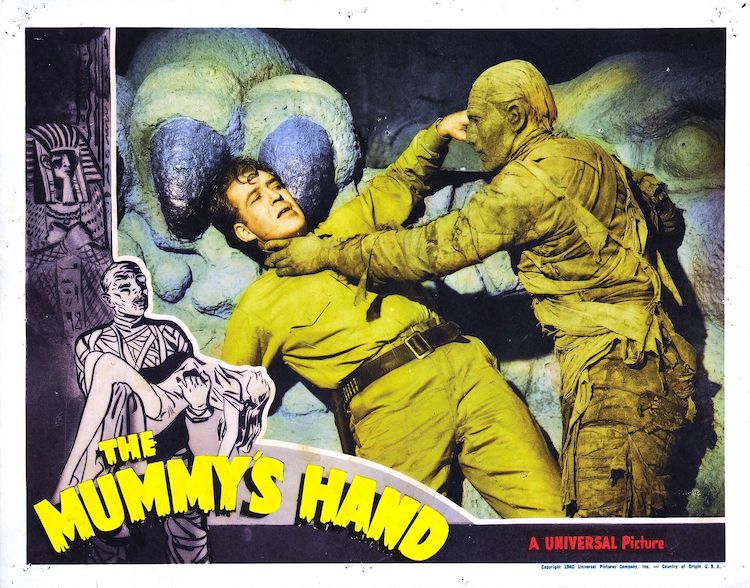 Notable for our purposes here, the original Universal Mummy movie was made in 1932 and begins in 1921 before jumping ahead ten years, meaning it was set roughly contemporaneously to when it was made. The same is true of the film’s first sequel, which was both shot and set in 1940. The Mummy’s Hand deviates from the plot of the original 1932 film to instead introduce a new mummy, one that will dominate the rest of Universal’s Mummy cycle.

This new mummy is named Kharis. Kharis also fell in love with a princess (Ananka this time) and was buried alive, without a tongue. Members of a secret sect come to visit his tomb every full moon, feeding him a brew made from (fictional) “tana leaves” to keep him alive. In the event that someone disturbs the tomb of the princess, they’re supposed to add more leaves to the brew, restoring movement to the mummy.

Because Kharis has no tongue, he’s not the eloquent villain that Karloff’s Imhotep was, and is, instead, the wordless, dragging, indestructible mummy that modern audiences tend to associate with the term. In The Mummy’s Hand, he’s played by Tom Tyler, though the later films in the franchise all feature Lon Chaney Jr. under the wrappings.

Filmed on what was described as a “modest” budget, reusing extensive footage from the 1932 film and pretty much the entire score of Son of Frankenstein, The Mummy’s Hand was also the last of the films to take place in Egypt. At the end of the picture, our protagonists have successfully looted the tomb of Princess Ananka, despite the mummy’s best efforts, and are heading back to the States in triumph. It is here that the rest of the films in the series will be set, and here that our narrative really picks up.

While The Mummy’s Hand was set the same year it was released, 1940, The Mummy’s Tomb was released in 1942, but set thirty years after the events of the previous film. Dick Foran, the lead from the previous film, is now the mummy’s first victim, played under old age makeup, as it follows him and his family to the fictional town of Mapleton, Massachusetts. More to our point, setting the film thirty years after the events of the previous one mean that The Mummy’s Tomb effectively takes place in 1970.

It’s a detail that the filmmakers obviously didn’t take into account for any number of reasons – 1970 looks, in every respect, exactly like 1942 and, indeed, in one scene, exactly like the graveyard in Frankenstein. This means that, when our white bread protagonist gets word that he’s gotten a commission in the military, we’re probably meant to assume he’s going to fight in World War II – never mind the chilling implication that World War II might still be going on in 1970. But maybe we’re supposed to think he’s going off to Vietnam, instead, and the filmmakers were just expert prognosticators, rather than simply not thinking about the math as hard as many of us nerds have in later years.

Orrin Grey is a skeleton who likes monsters and the author of several spooky books, including Guignol & Other Sardonic Tales and Painted Monsters & Other Strange Beasts. His stories about ghosts, monsters and sometimes the ghosts of monsters have been published in dozens of anthologies, while he writes about film and board games for Unwinnable, Signal Horizon, The Pitch, Weird Horror and others.

You’ve been reading an excerpt from Unwinnable Monthly Issue 144.

Babes in the Wood