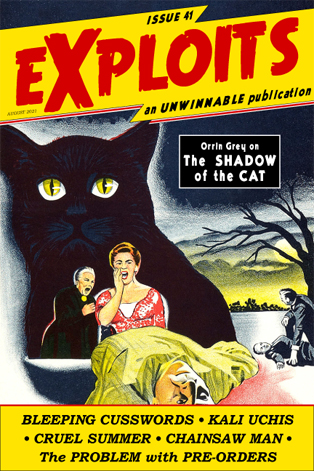 This is a reprint of the Movie essay from Issue #41 of Exploits, our collaborative cultural diary in magazine form. If you like what you see, buy it now for $2, or subscribe to never miss an issue (note: Exploits is always free for subscribers of Unwinnable Monthly).

I really like Hammer films – those creaky, gothic British chillers of yesteryear. I also really like black-and-white, old dark house pictures full of scheming relations. And I really like cats. So, imagine my surprise when I learned that there was a movie that combined all three of those things, and that I hadn’t seen it yet.

Fortunately, I was able to correct this injustice with a little help from the latest Hammer box set from Indicator Series. Shadow of the Cat (1961), directed by Hammer regular John Gilling and originally released on a double-bill with the (much) bleaker Curse of the Werewolf, is a movie whose logline sounds significantly weirder than it is, even while it remains a bit of a miracle that this oddity ever got made at all.

The premise is mostly familiar enough: an old lady gets knocked off by her husband and servants in a relatively brutal opening, and the only witness is the cat. So far so good. But rather than becoming a whodunit (we already know who, after all) or some other old dark house standby, it becomes a sort of proto-slasher, with the vengeful cat taking out the conspirators one by one.

Usually, it does this by leading them into some sort of danger and letting their own clumsiness and growing desperation do the work for it, and we never get anything nearly as, ahem, direct as the gruesome cat vengeance in the “Cat from Hell” segment of Tales from the Darkside: The Movie – one has to wonder if Stephen King, author of the original story that segment was adapted from, had seen this old chiller.

Part of what makes Shadow of the Cat work better than its rather laughable setup is that it is actually more Poe than most of the Poe adaptations that were its contemporaries or successors. We know that the filmmakers are aware of the connection, as the picture opens with the old lady reading “The Raven” to the cat in question.

Even as the cat is literally luring the conspirators to their doom, it also acts as a living – and constant – reminder of their guilt, which is doing them in as surely as any feline cunning.

Don’t Go In the Woods