For nearly a full decade, my Rookie of the Year columns have been dedicated to making fun of myself and the things that I love. So, it’s very slippery whenever I am tempted to write about something I don’t love.

My general rule: Don’t rip other people’s art. I’m not immune to doing it, but after years of youthful snobbery, it long ago dawned on me that, in most cases, people out there love that art, and who the hell am I to say they shouldn’t?

Which brings me to the novel I finished reading a few minutes ago. If I had a Twitter problem, I’d be tapping out a long thread right now about how the latest book by one of my all-time favorite authors is, well, stunningly awful. My thread would feature insane snippets of dialogue from the novel — total stream of consciousness nonsense uttered by contemptibly out-of-touch, over-educated upper middle class white people — and possibly I’d link to a Washington Post review with a paragraph of criticism so hilariously true that anything I might say would pale in comparison.

But I’m not going to do that. Why spend precious time being negative? Why tear apart an author who has given me and so many others so much pleasure as readers through the years? An author I have emulated at times in my own writing? Why put more pointless vitriol out into the world?

What a waste, right? 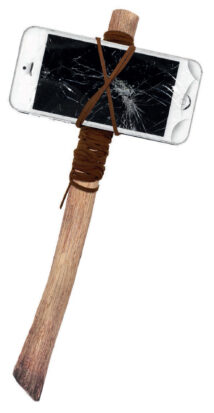 It sucked so much I can almost convince myself that telling you its name in this column could save you a few bucks and a few hours buying and reading it yourself. Maybe by doing so, I could save someone else from feeling the urge to vomit out more snark into the social media void. I could conclude that my rule of not knocking art has serious limitations, that critics who rip literature, music, theater, whatever, are providing a public service.

And perhaps they are. Perhaps telling you that this book, called The —

No, I won’t do it. It’s not who I am. It’s not, like I said, what this column is about. In fact, I won’t even give you a small hint. I won’t tell you that the author’s initials are the same letter twice and that that letter is —

Whoa! I nearly lost myself again there. I need to stop now, before I blow it, before I break my own rule, before I reveal that the cover features a photo of an iPhone and the font inside is so large it’s like the author was stretching to hit a page minimum in a high school essay.

Positivity! That’s among the Rookie of the Year hallmarks, one I’d like the five people who read this column every month to always count on and remember it for.

So, let me do this. Let me just list – off the top of my head! – say, I don’t know, three totally random novels I’ve liked. Maybe you haven’t read them but was considering it, and maybe this might push you over the edge. Maybe it won’t. Either way, here goes:

There, I already feel so much better. More rays of sunshine instead of dark clouds.

See you next month with more!

The Valley and the Flood Review