Naoki Urasawa is kind of a big deal. He has been writing and drawing manga for 40 years. His series, often longform mysteries targeted at adults, have landed him a myriad of awards, and been adapted for television and film. Walk into any bookstore that sells comics and you’re probably going to find an Urasawa book. Walk into a dedicated comics or manga bookstore, and you’re going to find a lot of Urasawa.

With such a large body of work, filled with long running series, many folks pass on Urasawa, intimidated by the length and scope of his works. I’m here to pull you back in, as Urasawa is an excellent storyteller, amazing artist and deserves at least some of your time.

In terms of first volumes, both Monster and 20th Century Boys are excellent, and distinctive enough (despite the shared genre) that you’re likely to gravitate sharply towards one rather than both.

Monster is about chasing a serial killer, the titular “monster.” It makes total sense that this series, of all of Urasawa’s work, was turned into a TV series, as it leans heavily into the mold of a serial crime thriller.

Set in West Germany in the mid 80s and mid 90s, we follow Dr. Kenzo Tenma, an extraordinary young man who, by every account, is a brain surgeon prodigy. Having moved to Germany from Japan to work at an illustrious research hospital, Tenma is kind-hearted and hard working, but generally a pushover. His morally bankrupt bosses and even fiancée use Tenma as a tool to get what they want, steamrolling over any protest he may have.

This all culminates when Tenma makes a dramatic decision that flies in the face of his bosses. Tenma, who is about to operate on a child who was shot in the head, is pulled out of the operating room to instead operate on the mayor, who just arrived. Tenma refuses, choosing the child over the mayor. 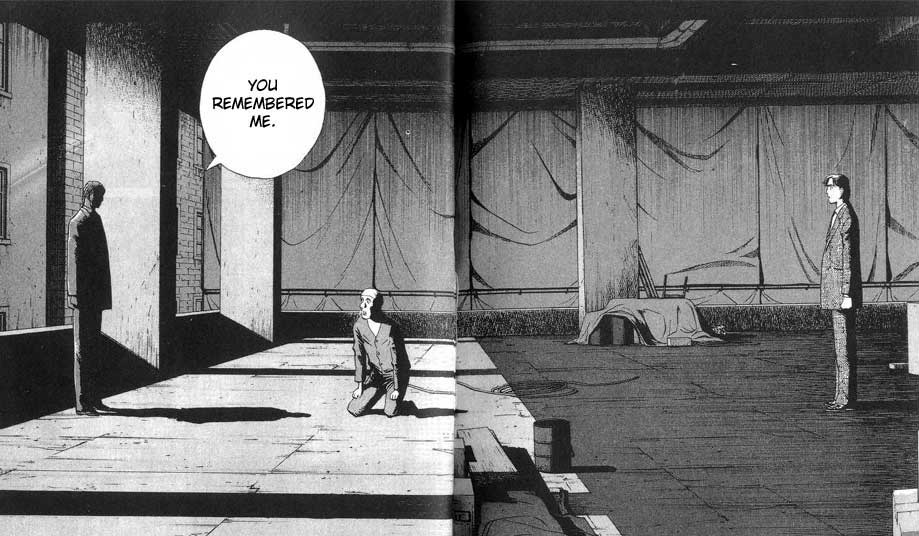 This decision changes everything. It costs Tenma everything: his fiancee, his upward career trajectory, his hospital standing and more.

But most importantly, years later, Tenma discovers the boy he saved has turned into a prolific serial killer.

With this strong setup, and Tenma’s strong sense of morality and responsibility, Monster comes out the gate swinging. Every scene in Monster is a page turner, filled with suspense, subterfuge, tension, or danger. Urasawa knows how to keep the stakes high. Monster never feels meandering or slow, with Urasawa cutting into and out of scenes perfectly to maintain momentum and drama.

The characters are all extraordinary, both literally and figuratively. Dr. Tenma is a man pushed to his limits, shaped by this disaster he feels responsible to solve. He feels desperate and out of his element, but steadfast in his desire to protect people from harm. The boy-turned-serial-killer antagonist, Johan, feels mysterious, unnerving and unknowable, despite his presence and dialogue in multiple scenes. It is mostly through the detective work of Dr. Tenma, speaking with connections and witnesses, that we learn more of Johan, and he is terrifyingly described in hushed tones as “pure evil”, “the devil” and “a monster.” This, contrasted with Johan’s serene and even-keeled manner, leaves you excited and desperate to know more.

20th Century Boys, while sharing a long length, a grand mystery and Urasawa’s mix of grounded and expressive art, is very different from Monster. The mystery here isn’t a single serial killer, but rather a possibly global force conspiring to end humanity itself.

Our protagonist, Kenji Endo, is a late 20s/early 30s manager at his family’s convenience store. Kenji is depicted as a bit of a loser, a laid-back, go-with-the-flow kind of guy who, through a string of bad luck and passivity, is stuck trying to keep the family store afloat and raise his adorable niece, whom his sister essentially dumped on him. One day, Kenji and his childhood friends receive word that their other friend from childhood, nicknamed “Donkey,” committed suicide. Shocked and distraught by the news, the friends gather to grieve and reminisce. But after looking into a series of strange coincidences, Kenji begins to believe Donkey was actually murdered. His suspicions turn into a haphazard investigation and, before long, dots connecting a strange cult, a deadly virus, the boys’ childhoods and a massive robot begin to appear. 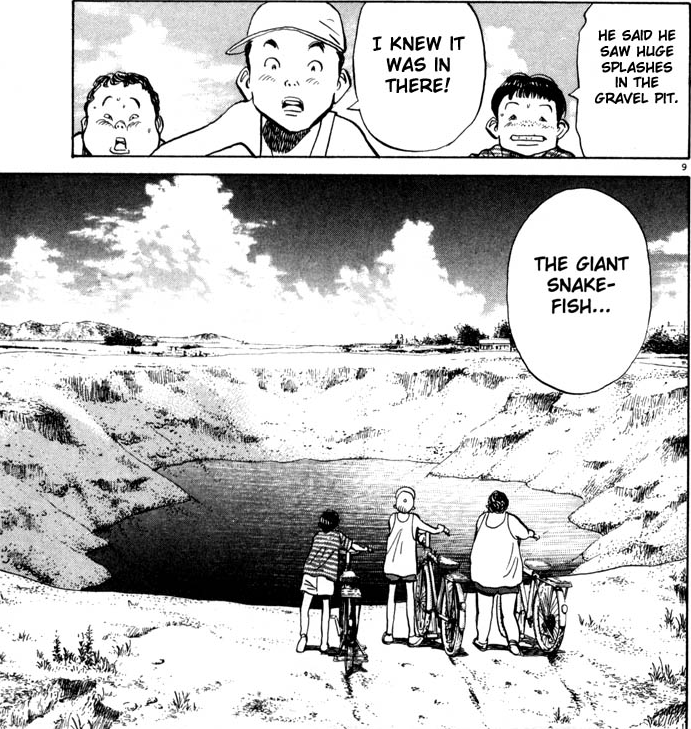 Unlike Monster’s crime thriller setup, 20th Century Boys is billed as a science-fiction adventure story, and that becomes very clear first and foremost in the pacing. The first book of 20th Century Boys is slow, casting a wide net over a myriad of characters, events, time periods and themes. Thankfully, the tension begins to crank up in the second half of the book as the stakes suddenly rise. But more importantly, it is clear that 20th Century Boys is equally concerned with exploring time and nostalgia, rather than solely a world-threatening mystery. This first book is fairly evenly split between scenes of the main cast as adults and flashbacks of their antics as children. The past does end up playing a major role in the central mystery, but Urasawa renders these flashbacks with such detail and focus that, sometimes, the main plot takes a backseat, and the book becomes an exploration of smaller childhood moments. In 20th Century Boys, Urasawa explores how our child selves inform our adult selves, how our values and goals change and how our sacrifices shape who we are.

Maybe the cast of 20th Century Boys also spend so much time reminiscing because they are not hyper-successful adults. Unlike the cast of Monster, the cast of 20th Century Boys are largely ordinary, average people, not possessing extraordinary talents, backgrounds or goals. Everyone in 20th Century Boys feels more normal, like people you’ve met in real life: imperfect, boisterous, stubborn, arrogant, goofy, whimsical and changeable. This band of misfits are clearly going to come together to stop something big and strange and sinister. But along the way, it’s likely the baggage of their youth, and how to grow as a person, will become central themes. Or at least, that’s what it seems like, from this first book.

An Artist Focused on People

On the art side, Monster and 20th Century boys are depicted similarly. Urasawa manages to make both Monster and 20th Century Boys a joy to look at despite the fact that they consist almost exclusively of characters talking to each other. His style is very realistic, yet his characters are all rendered distinctively and expressively. Urasawa manages to convey both huge, dramatic feelings and small, nuanced expressions masterfully. Tension in both books is mostly ratcheted up through panel layout and character expressions rather than flashy character poses or fight scenes. With clever panel zooms, small panels leading to large splash page reveals, or dramatic close ups on characters in the midst of realization, Urasawa’s art and dialogue are married beautifully and elevate his narrative to grand heights. 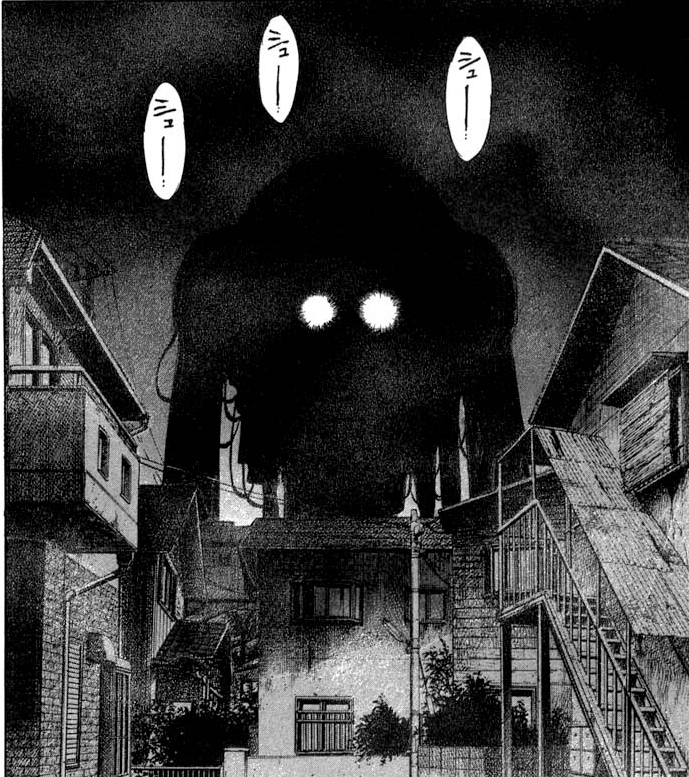 A Year at a Comics Store