“Banish that power which keeps my life in thrall.”

My first exposure to powwow and the Long Lost Friend came from the Appalachian folk horror stories of Manly Wade Wellman. Years later, I was hired to write a short freelance article about the so-called “Pennsylvania hex murder” of Nelson Rehmeyer in 1928.

(For those who aren’t familiar with it, powwow is the informal name of a kind of American folk magic tradition practiced by the Pennsylvania Dutch and others. The Long Lost Friend is a powwow grimoire originally published in German.)

In spite of all that, I had never so much as heard of the 1988 film Apprentice to Murder until its release on Blu-ray from Arrow Video. What makes that odd is not just that powwow beliefs and the Long Lost Friend play a front-and-center role in Apprentice to Murder; the film is actually a fictionalized account of the killing of Nelson Rehmeyer.

In the movie, young Billy Kelly (Chad Lowe, brother of Rob Lowe) is growing up poor in Norway-standing-in-for-Pennsylvania 1927. His father is an alcoholic and when Billy turns to local powwow doctor John Reese (Donald Sutherland) to cure his father’s drinking, the plot is underway.

It doesn’t take long for Billy to fall under the proverbial (and, it is implied, perhaps literal) spell of the charismatic Reese, who he calls, probably accurately, “the most educated man I ever met.” Reese teaches Billy to read and write, and begins to teach him the art of powwow. Billy, in turn, becomes Reese’s devoted disciple. 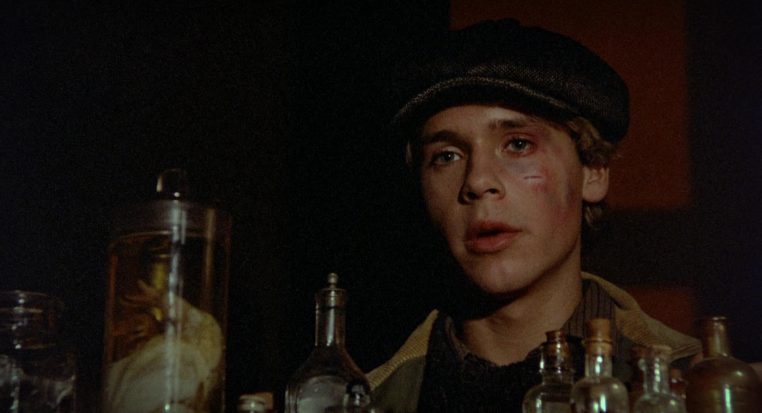 At the same time, Billy is also falling for Alice Spangler (Mia Sara), a young woman who works with him at the tannery and whose aunt owns the boarding house where Reese lives. Throughout all this, we’re also shown a seemingly-sinister neighbor who lives like a hermit in a boarded-up red house not far from Billy’s.

This neighbor, Lars Hoeglin (Norwegian actor Knut Husebø) dresses like a storybook wizard and the film (via Billy’s subjective impressions) makes sure that he always appears ominous. The first time we see him, he “just appeared behind me,” as Billy would have it, like he “came up out of the ground.”

In fact, we’re given very few reasons not to believe, just as Billy does, that Reese is fighting the proverbial good fight against supernatural foes and human skepticism. The vast majority of those hints – such as that he spent four years on a “funny farm” – come from Alice, who introduces Billy to Reese, only to almost immediately become concerned and jealous about the closeness between the two.

In spite of this, those of us who are already aware of the true story upon which this movie is based know more-or-less how it’s going to end – with an innocent Hoeglin dead at the hands of Billy and Reese. And if they wanted to keep it close to the vest, they maybe shouldn’t have called the movie Apprentice to Murder.

The picture certainly takes its time in getting there, though. Shot in Norway rather than Pennsylvania, it’s a chilly, rainy film where the ground seems to always be mud and the sky always leaden. While ostensibly equal time is given to Billy’s (dully inevitable, it has to be said) burgeoning romance with Alice, it is the scenes with the magnetic Reese that steal the show. 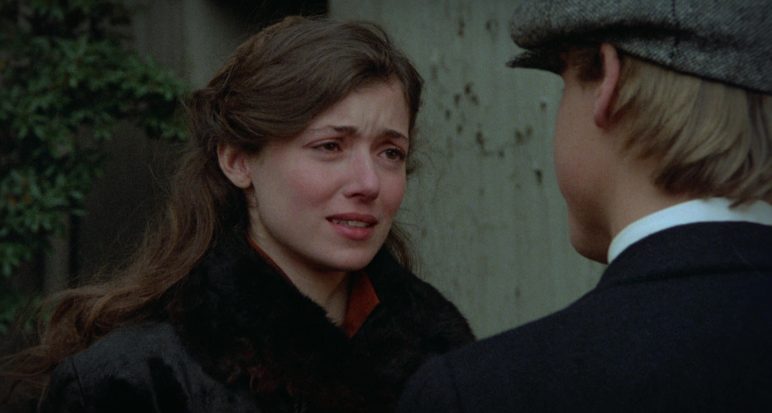 You can blame that on the acting prowess of Donald Sutherland, if you like, but the screenwriters (one of whom had previously worked with Sutherland on Don’t Look Now more than a decade before) and director seem more taken with the trappings of powwow beliefs than with the murder of the title.

For what feels like nine-tenths of the film, the only real conflict is that Alice wants to go start a new life with Billy in the city, but he doesn’t want to leave his new mentor.

Sure, there are occasional pops that something may be wrong – Alice overhears Reese muttering invocations and Billy’s name in the night; Reese is arrested after the death of one of his patients – but nothing really rises to the level of actual conflict until a mysterious plague begins wiping out livestock on a neighboring farm.

On IMDb and Letterboxd, Apprentice to Murder has the following, far-more-lurid-sounding synopsis: “Fire-and-brimstone preacher sees Satan everywhere, trains gullible young boy to ‘detect’ evil, and the two of them commit several murders in the name of Jesus. Based on a true story.”

Well, not quite every word of that is inaccurate, I’ll give them that much, anyway.

The film only features the one murder, which is more a case of manslaughter anyway, and for all Reese’s (somewhat deranged, certainly) mutterings about the Almighty, he’s far from what we think of when you see the words “fire-and-brimstone preacher” in a movie. I guess that “based on a true story” part is right enough. 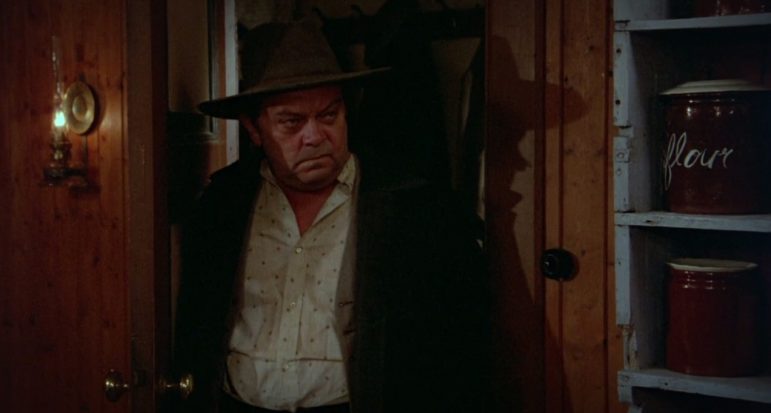 In fact, one of the most interesting things about Apprentice to Murder is how closely it hews to certain details of the infamous “hex murder” case – everything from the instructions the two men follow in attempting to break the curse to the detail that Reese, standing in for real-life killer John Blymire, sees the face of his enemy in the palm of his hand.

Yet, the film also diverges substantially on many of the particulars. The real killing involved three perpetrators, not two, and most of the relationships are changed around – or never existed at all. The tragic house fire that helps drive Billy to commit the crime – while also giving some of the film’s non-subjective evidence that Reese’s powwow magic may work after all – never happened, and the character of Alice is created from whole cloth.

In real life, Blymire and two other men broke into Nelson Rehmeyer’s house in an effort to obtain a lock of hair and to burn his copy of the Long Lost Friend, just as Reese and Billy do to Hoeglin in the film. They beat and stabbed him and tried to burn down his house. But they did it because they were convinced that Rehmeyer, who was also a powwow worker, had placed a hex on them.

In the movie, Billy asks Reese to look into the mysterious deaths of livestock on a neighbor’s farm, resulting in an apparent spiritual battle that leaves the powwow doctor in a sorry state. After a couple of false starts, Billy takes Reese to Mama Isobel, a blind hex woman, who shows Reese the face of his enemy.

From there, we’re into that breathless last tenth of the film, as Billy and Reese go to Hoeglin’s house to collect a lock of his hair and end the curse, only to end up stabbing him instead. Both Billy and Reese see Hoeglin breathe fire at them – fire which ultimately consumes his home. 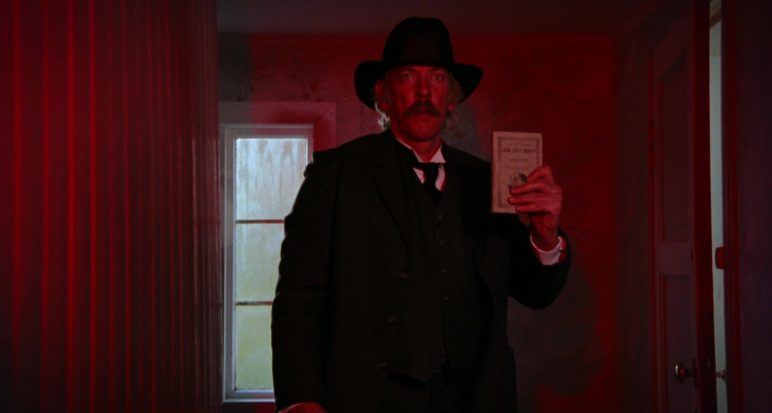 When the police bring Billy back to the scene of the crime and he sees that the house is untouched by flame, he realizes he’s been dragged into Reese’s deadly delusions. If only deprogramming were always so easy.

The film ends with a teary goodbye in which Alice tells Billy that she’ll wait for him, followed by a title card telling us that he spent five years in prison before he and Alice got married and lived happily ever after. The Hollywood ending version of what really happened, which involved longer sentences for all three men.

Logging Apprentice to Murder on Letterboxd, I found that it had surprisingly poor reviews, which I think may primarily be chalked up to audiences expecting something more in the vein of other ‘80s American folk horror flicks like Deadly Blessing or Children of the Corn. Instead, they got a character-driven melodrama that almost forgot to include its titular murder – even the Appalachian folk magic infused Dark August in Arrow’s American Horror Collection was more of a typical horror film than this.

Apprentice to Murder isn’t an undiscovered classic or anything – it’s far too meandering for that – but it’s better than its two-and-a-half-star average on Letterboxd would suggest, and more than worth a look for anyone with a passing interest in American folk magic traditions.

Because Bigger is Better: RoboCop (1987) on Blu-ray

A Very Special Human Being: Man of a Thousand Faces (1957) on Blu-ray