“No better way to steal than free enterprise.”

No one who is even considering picking up the Arrow Video Blu-ray special edition – and, indeed, probably no one who is reading Unwinnable – needs me to tell them about RoboCop. This is one of those situations where the question at hand is not “how’s the movie,” but rather, “how is this particular release of the movie?”

And the answer is: exquisite. I haven’t compared every version of RoboCop that’s currently available, but as someone who has been a fan of the film since I was a kid, and who has seen it – probably in most of its various permutations – many times over the years, I can’t think of much that you might want from RoboCop that isn’t included in this edition.

There are, of course, both the theatrical and the director’s cuts of the film – both restored in HD – as well as the TV edit (in SD), not to mention all of the various alternate scenes and other changes made for the various TV edits, included as a separate feature in HD. (As someone who watched RoboCop on TV more than once at a tender age, the inclusion of these TV edits is great news for me.)

There’s an 80-page booklet, a poster, reversible sleeve art and a cardboard slipcase that matches Arrow’s other deluxe packaging. This thing sits perfectly on the shelf alongside other recent Arrow releases such as An American Werewolf in London or the Ringu Collection boxed set.

The discs themselves are loaded with commentary tracks, behind-the-scenes stuff, interviews, isolated scores, outtakes, deleted scenes, panel discussions and so on. The total number of commentary tracks is something like four, with an archival commentary from Verhoeven, not to mention new commentaries from film historian Paul M. Sammon and a commentary track with a trio of RoboCop fans. 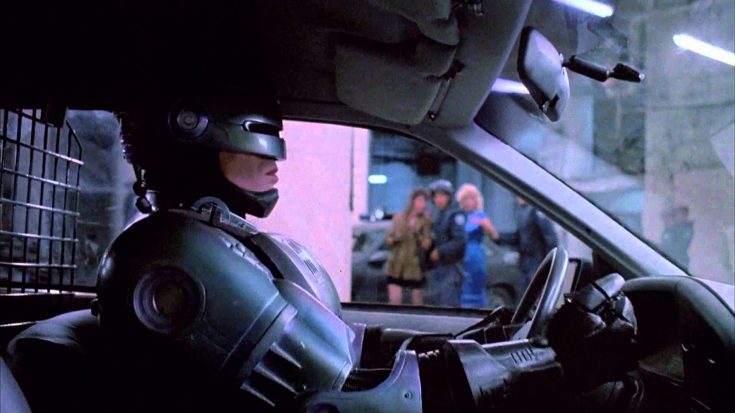 Featurettes included cover subjects ranging from the casting and acting to the score, the special effects, the props and more. There’s a storyboard of the ED-209 boardroom sequence with a commentary track by Phil Tippett. There’s a deleted scene that features topless pizza preparation and the “I’d buy that for a dollar” guy.

Is it enough to justify purchase if you’ve already got a copy of RoboCop? It probably depends on how much you like the movie, and how much you like special features, and how likely you are to watch the various different versions.

If you’re happy just watching the movie now and again, you may be set with whatever edition you’ve currently got on Blu. But if you like special features, or want to compare the different cuts of the movie, this is probably as good a release as the film has ever gotten.

I said at the beginning that I didn’t need to convince anyone reading this about RoboCop, and I figure that’s true, but I’m also here, so I may as well talk about the movie, and about watching it again in 2019.

One of the most surreal facts of my life is that, when I was a kid, we had a RoboCop Saturday morning cartoon series. RoboCop toys. You name it. I still own the ED-209 toy that I got when I was a kid; the one that shot caps and had misprinted packaging that called him ED-260. 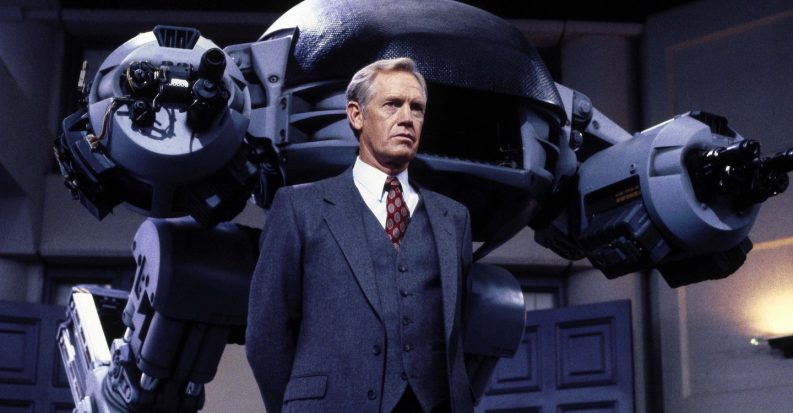 That kind of cognitive dissonance is present a lot when watching RoboCop in the year 2019 – an era when the film feels less like an over-the-top social satire and more like a documentary, for all its extreme 1980s-ness.

Possibly the most egregious self-own I’ve ever seen on Twitter was a guy claiming that Star Wars movies or some shit were getting “too political,” who tweeted something like, “Next thing you know, you’ll be trying to tell me that RoboCop is political.”

It is, in fact, such a spectacular self-own that I would have assumed it was a joke, had he not continued to double-down on it for several tweets. If, at that point, what I witnessed was, indeed, satire, he was showing a commitment to it that would have made Verhoeven proud.

As outrageous as the corporate malfeasance, disregard for human life and fixation on profits over everything is in RoboCop, I don’t feel like even it would have ever predicted a future in which Donald Trump was actually the president of the United States. 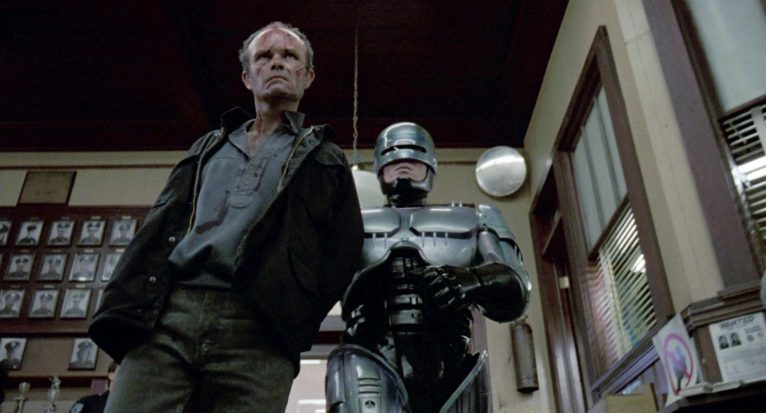 But our modern morass fits right in with the film’s juxtaposition of footage of wartime atrocities alongside commercials for gas-guzzling cars, sexist comedy shows and board games where you pretend to nuke your family members.

Just as RoboCop features an uncannily prescient critique of capitalism and American society mired in inescapably ‘80s trappings – old-fashioned tube TVs, no internet and a fixation on cocaine and violent crime – even its most outlandish imaginings couldn’t quite formulate what the very things it was warning us about would bring to fruition in the coming decades.

It may not have predicted our current “reality TV” president, but his greed and megalomania feel right at home amid its grim news broadcasts, crass commercialism and grotesque ultraviolence.

One of the signature joys of RoboCop – and, indeed, most of Verhoeven’s social satires – is also captured, to some extent, in that guy’s ridiculous tweet, and those extremely ironic toy lines and cartoon shows. RoboCop is both entirely committed to its pulp logline and a cutting satire of the assumptions that underlie those pulp roots.

It is a film that lends itself to action figures and consumption, and a film that tells you – in no uncertain terms – why that consumption is regrettable. So you can have your cake and feel bad about it, too! And what better way to do that than with a fancy Blu-ray that you probably don’t actually need because you probably already own the movie but this one is bigger and nicer and, after all, “bigger is better” is an American tradition…

A Beautiful Pattern: Knives Out and What’s Wrong with America