This column is reprinted from Unwinnable Monthly #120. If you like what you see, grab the magazine for less than ten dollars, or subscribe and get all future magazines for half price.

The other day, an image of American McGee’s Alice admiring her blood-spattered Vorpal Blade floated across my laptop screensaver. “Who is that?” my roommate asked.

“It’s Alice,” I said. “I mean, videogame Alice. She’s locked up in an asylum and has to kill things in evil Wonderland.” I paused. “It’s, like, a metaphor.” This wasn’t particularly eloquent, but it had been a while since I talked to anyone about American McGee’s Alice. The game nevertheless holds a firm place in my psyche – as evidenced by its inclusion in my screensaver, which primarily consists of beautiful maidens napping in forests and/or murdering people. Alice does fit that theme, though. She’s a Victorian girl who, in American McGee’s vision, has to murder the shadows within her own psyche. The landscapes are lush and the angst is abundant.

When the first game came out, I was in middle school, and in graduate school for the release of its sequel, Alice: Madness Returns. Both releases came at transitional periods of my life when I had bad skin and a lot of homework. When I desperately wanted to escape into lush landscapes with abundant angst (granted, I feel this way most of the time, as you’ll know if you’ve read this column even once before). While I thoroughly enjoyed Madness Returns, I mostly want to talk about Alice in the original. Because middle school is terrible. 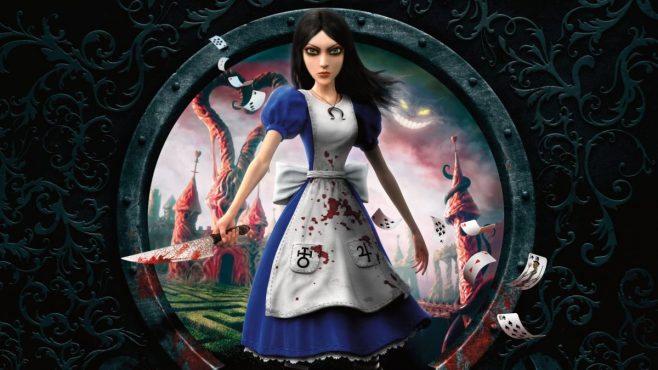 Growing up, I collected different editions of Lewis Carroll’s novels, Alice’s Adventures in Wonderland and its sequel, Through the Looking-Glass, and What Alice Found There. In all, I collected about fifty editions, mostly paperbacks found at used bookstores, illustrated by a variety of artists (the text entered the public domain in 1907, allowing ample opportunities for interpretation). It wasn’t only the worlds that fascinated me – the rabbit hole in Wonderland, the chessboard in Through the Looking-Glass – but the absurdity and cleverness of Carroll’s language, his riddles and poems. At one point in Through the Looking-Glass, the White Queen asks Alice, “‘Can you do Division? Divide a loaf by a knife – what’s the answer to that?’” Cutting in, the Red Queen answers, “Bread-and-butter, of course.” The logic was absurd, but it still felt logical. Carroll was a mathematician, after all. Learning looking-glass logic made me feel clever.

When American McGee’s game came out, playing it seemed a natural extension of my Alice obsession. More than that, the darkness of the game came at a psychologically appropriate time. Middle school is awful for most pre-adolescents, and certainly most nerdy ones. It made sense that the dream worlds of childhood, whether my own or Alice Liddell’s, would warp and become sinister. Those comforting ideas would become concepts I now had to fight, that my own mind would become something to fight. So I fought my way through hordes of cards and monsters with a bloody Vorpal Blade, making my way to the Queen of Hearts.

It made sense that the dream worlds of childhood, whether my own or Alice Liddell’s, would warp and become sinister.

The final boss, the Queen of Hearts must be defeated in several incarnations. Her ultimate form is the Demon Queen, a tentacled leviathan crowned by flaming spikes who shoots lasers from a hole in her belly. This is slightly different from Disney’s Queen of Hearts, who says “Off with her head!” in such a funny way. The Cheshire Cat – a skeletal adaptation of John Tenniel’s classic illustration – warns Alice, “You and this Red Queen cannot both survive. You are two parts of the same . . .” The Queen is Alice’s darkness come to life, her guilt, shame and inner shadows. She’s an anthropomorphic personification of the worst parts of Alice’s mind.

“Self-pitying dreamers are not wanted here,” the Queen of Hearts tells Alice. “They cannot survive here . . . Retreat to the sterile safety of your self-delusions, or risk inevitable annihilation.”

And assuming the player doesn’t run screaming from the screen, Alice decides inevitable annihilation might be worth preserving her mental health.

I had always related to Lewis Carroll’s Alice – the little girl lost in a fanciful world – and I then related to American McGee’s Alice – an adolescent girl lost in the horrors of her own mind. If you defeat the Queen, the game grants a happy ending: Alice leaves the asylum, smiling, a non-skeletal cat at her side. Maybe that’s a metaphor for leaving adolescence behind.

Nevermind the sequel, in which Alice returns to the asylum for even more horrifying adventures. That’s not part of this metaphor