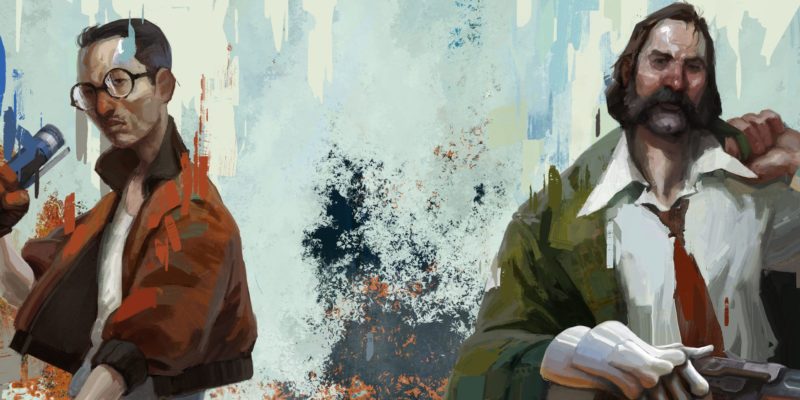 I can honestly say that I haven’t played a game as miserable as Disco Elysium in some time, at least at first. You wake up in a disheveled hotel room with little memory of how to human properly. You soon learn that you’re a police detective who spend the past night partying, binging on alcohol, and eventually landing in a dark, suicidal place, all thanks to how fucked up your life is. You go outside the hotel and find children who hurl homophobic slurs at you. The world of Disco Elysium’s Revachol is a deeply cynical, shitty place, and you are given the option to respond in kind, continuing your trash fire of an existence in spades. But there’s beauty and redemption to be found at the game’s core, too, an underlying message that there’s value in both accepting and letting go of the past as you try to reflect what you want to see in the world. That message is not a given, though. You have to want it and put in the effort to find it, much like real life.

Not that the game does itself any favors in the outset. The aforementioned kids who spout homophobic slurs are unpleasant enough to drive someone away from the game fairly early, and you’re given the option to say some pretty vile things yourself in line with who you were before you took over piloting this detective, most unpleasant of which is hitting on women or letting blatant racism slide. It’s in this way that Disco Elysium will sometimes veer too far into edgelord territory with its writing, particularly with the slurs. Still, the point is clear: You have the potential to be a truly shitty person, and in fact have been at points before the Martinnaise murder investigation. Your alcoholism and misery are almost immediately apparent from the moment you wake up, and you can awkwardly hit on the first woman you meet. A picture begins to form of who you were before this: A misogynistic asshole alcoholic.

Giving players the option to be a shitty person is fraught with the danger of emboldening actual shitty people, but thankfully, Disco Elysium provides you with a conscience in the form of Kim Kitsuragi, who also happens to be the heart and soul of the game. As your temporary partner in solving the Martinnaise murder, Kim does his best to keep you on the straight and narrow, though he’s never so forceful as to limit your choices in the game. If you do enough harmful things, i.e. be too much of a party monster or agree with racist or fascist viewpoints too much for no reason, and you’ll alienate him. He serves as a barometer on how your implicit alignment shakes out, eventually giving the police his thoughts on you as a person at the end of the game, determining if you stay on the force or not. Again, the game never forces you to be as utterly strait-laced as him, but you see much of the world of Revachol through his lens, giving everything a tinge of intentionality, and a point of view that other choice-based RPGs might lack.

So, too, does the game limit your responses based on who your character is. The worst responses you can give involve alcohol and drug abuse as well as a bitterness towards women. While you can agree with a racist character’s racism in the game, the actual response doesn’t make it sound like your heart’s in it. That’s because it would seemingly be out of character for you to actually make that choice. Likewise, when you’re given the option to add fascist thought patterns to your Thought Cabinet, granting you bonuses for espousing fascist rhetoric, it’s framed as stemming from your deep-seeded hatred of women, all but pointing for you to reject the notion. It’s not that your previous history makes you spouting fascist talking points believable, but rather a flaw in your character providing a gateway towards aligning with that line of thinking. You’re given freedom to choose, yes, but how these choices are framed makes all the difference in the world, again giving the game a point of view even as it gives you a buffet of different responses.

The fact remains, though, that in your past, you were a shithead. As you go digging around into your memory and past, however, you discover that there was more to you than just a trash detective. You closed hundreds of cases and was in a loving relationship with a beautiful woman until she left you. But you couldn’t let go of the good times you had with her and let those feelings fester into unhealthy habits and views, culminating in a night of debauchery and self-loathing. It’s important that Disco Elysium establishes that you’re a complex character so that it has a foundation upon which for you to build on to role play.

There’s a big misconception out there about role playing in video games that considers it synonymous with doing whatever you want and having unbound freedom. That’s not entirely accurate, as role playing is literally playing a role of a character. That doesn’t mean just doing whatever you feel like at any given time. You need a concept for who your character is as a basis for your actions, something so many so-called role-playing games fail at encouraging. Disco Elysium gives you enough backstory to come up with a concept and motivations while at the same time not railroading you down a specific path.

All throughout Disco Elysium, you find references to the past and those who hold onto it, of which your character’s fixation on his ex-wife is the centerpiece. A scene that plays right before the case is solved has your character dreaming he met godlike figure Dolores Dei, except she’s talking and acting like she’s your ex. There’s a moment when you can do a skill check to attempt to kiss her. You succeed, but she still doesn’t reciprocate. Itself a powerful commentary on games that value mechanics over narrative, it’s also a turning point where your realize what your character has done up until now is either in service to holding on or moving forward. Much like the beginning of the game, the past is done. You can’t change what already happened. What you can change is how you react from now on. You’re given one last opportunity to alter your behavior as you close in on the murderer, but you realize that’s what the game has been about since the start. If role playing is about capturing the concept and motivations of a character, then Disco Elysium gives you the freedom to continue to be a fuckup or to actually learn from your mistakes, letting go of the past even as you continue to carry the baggage of it.

Themes of letting go permeate the entirety of the game right down to the motivation of the guilty party. You find a hermit living on a nearby islet, and though normally pulling a suspect out of thin air is poor plotting, here it’s the culmination of history and ideas that the game flirts with throughout your quest in Martinnaise. As you comb the town for clues, you learn the history of Revochol, Martinnaise, and the greater world at large. You learn about how Martinnaise was where a communist revolution made its last stand and was obliterated by capitalist forces. Now the world is ruled by a neoliberal council. Still, though, pockets of communist thought remain, and the hermit embodies one of them. Namely, he’s one of the last living soldiers who was there for the massacre, as he ran away before the bombs dropped. He still holds onto the hope for revolution, never compromising, never letting go of the past and seeing the realities of the present. He’s living in a hell not unsimilar to your character’s, except there’s no chance at redemption for him.

These two scenes encapsulate what makes Disco Elysium so poignant. You can find beauty in this ugly, cynical world if you can look at where you’ve been, look at what you’re still holding onto, and saying “I can do better”. It’s not about making the past disappear. That’s impossible, and you’ll always have your past deeds weighing you down. But people are complex beings, good and bad. Disco Elysium neatly sums up what makes role playing so powerful. It’s not about unbound freedom. It’s about us shaping our own character arcs.