It was a terrible night for baseball. Less than 50 degrees and wet enough for a 45-minute delay, I had begun to hope that the game would be postponed to the following afternoon, which was expected to be beautiful. But a little before eight o’clock, the infield tarp was rolled up, fresh dirt was sprinkled on the base paths, and the first pitch was thrown. The first batter was Phillies left fielder, Andrew McCutchen, but it could be argued that the game didn’t really start until the third hitter stepped into the box. It was the night that Bryce Harper returned to Washington, DC.

It’s probably not worthwhile to recap Bryce Harper’s offseason as a free agent, except to say that for a long time nothing really happened. Harper had declined an offer from the Nationals after the end of the 2018 season and, while it seemed that both sides were ready to move on, the lack of a contract into the beginning of spring training seemed to hold out the hope to the more unreasonable among us that the impossible might happen. The market was dead, the big teams — the Yankees, the Dodgers — made clear that they just weren’t interested. Washington had been active in getting new names, spending the Harper money, but wasn’t it just possible? Baseball is a crazy game.

And then we got a crazy outcome, a story better than we had any right to hope for. Bryce Harper signed a 13 year, $330 million dollar contract with division rival Philadelphia. Harper was indeed coming back to DC, at least 10 times in 2019 and probably just as many times per year until 2031, but in the wrong uniform, with the wrong number. The leaving one could almost handle. It was the coming back that promised to be a disaster.

It’s entirely irrational to personalize personnel moves in professional sports. It’s a job, working for a business, in which both sides make noise about looking out for some sort of common goal and some sort of attachment to the city that hosts them, but affection plays very little role in anyone’s decision making. The minimum player salary in Major League Baseball is more than half a million dollars per year and beyond the absurdity of people being paid so much to play a game that so many of us happily play for free, there’s no real reason to argue that the players should earn a smaller share of the billions of dollars that their play generates in the form of ticket sales, TV licensing and merchandise. 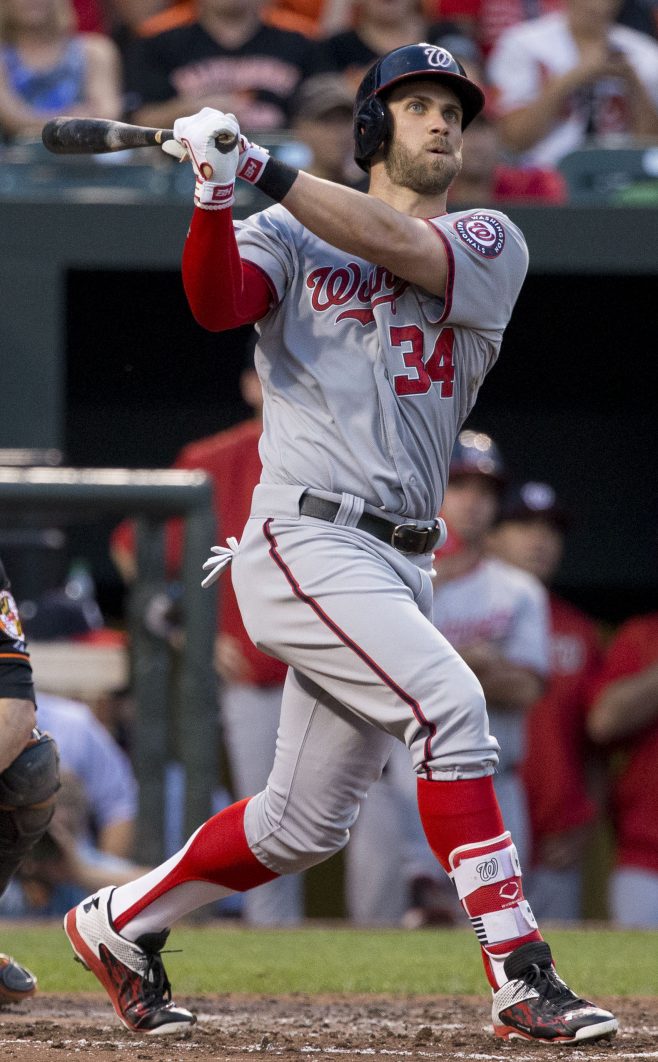 More than $25 million per year in salary is madness. But a $42 average Nationals ticket price multiplied by 31,000 average per game attendance multiplied by 81 home games starts to add up to real money. (Multiply that by 30 MLB teams and then factor in that TV revenue dwarfs ticket sales. My admittedly rough thought experiment estimates $3,163,860,000 in regular season MLB ticket sales. At $10 billion, 2018 TV revenue was more than three times that.)

It’s not personal. It’s just money. If the Lerner family had wanted to bring Harper back, they could have done so. There are reports that Harper wanted to come back, that he thought until the very end that he would be back, although these reports should probably not be taken any more or less seriously than the reports of how happy he is in Philadelphia, how excited he is to play with his new team. Philadelphia is a fine city, and I’m sure I could be happy just about anywhere with $25 million a year for the next decade.

It’s irrational to take any of this personally, but what’s rational about professional sports?

I moved to the DC area right when Harper started to play. His rookie year in 2012 was my first season following my adopted home team in my adopted home. I bought my first red hat with a white curly W, and cheered as Harper won rookie of the year. I watched the Nationals become a force in their division, and make the playoffs for the first times since the team was moved unceremoniously, under MLB ownership, to DC from Montreal.

I watched last year when Harper, decked out somewhat ridiculously in a star-spangled headband and swinging a star-spangled bat won the Home Run Derby in his home park in front of thousands of adoring hometown fans. If I thought about it, even then I would have said that it felt like a valediction, something in place of the World Series he couldn’t deliver the MVP season he could never quite repeat. It was, this one rather meaningless thing, for us, a gift, an apology. It was nothing less than magnificent.

I wish, in that spirit, that Harper’s return had been slightly different. I wish that we had been able to move beyond the personal for a moment, or at least into a different sort of personal. I had been asked more than once when people found out that I was going to be at that first game whether I planned to boo, and my response was always without hesitation. Absolutely not. I compared Harper’s departure to a division rival in conversation once with my closest friend to a particularly bad college breakup, but it’s not really like that at all, no matter how much it felt that way.

The boos, of course, were deafening. I saw jerseys worn by DC fans with Harper’s old number and “TRAITOR” taped over his name. I saw one with “JUDAS.” Harper is the only player whose name I have ever had on an article of clothing, and even if I won’t wear that shirt in public, I am wearing it now.

In some sense, the boos are a good thing. Sports are really nothing but a set of stories – Harper’s first swinging strikeout when even I pumped my fist in the air, the two-run homer he hit before the end of the night, after I had left, frozen out, when Harper flipped his bat end over end toward the Nationals dugout and tipped his hat to the busload of Philadelphia fans chanting “We got Harper” in right field—and this story is a great one. It’ll sell tickets and jerseys. It’s a story I’ve told my kids, that I’m telling you, that I’ll carry with me and tell again and again.

I wish we had cheered once, though, when the lineup was announced, said thank you before finally saying goodbye. And it really was goodbye. There’s a no-trade clause in Harper’s new contract. No opt-outs, reportedly, for either side. He’s really gone, even if he didn’t go far enough to feel quite like a clean break.

I might be a bit more willing to acknowledge now that Harper has never really been competition for Mike Trout in the race for best player in baseball. I can admit that those gold spikes he wore to his first All-Star Game were a bit silly. I can remind myself of his struggles at the plate, and that it was always a mistake to play him even in center field rather than right.

It’s still jarring to watch him perform his plate routine — tapping the plate four times, outside-inside-outside-inside — in the wrong uniform. It will be for a long time. I don’t know if he’ll bring a championship in Philadelphia or if DC will win without him. It’s the wrong question entirely. Things change. The world moves on. The boos may quiet, or they may not, but I wish Harper well. Except when he’s playing the Nationals, of course.

When Building a Banana Republic, Morality Isn’t Exactly a Priority