From ancient myths to modern-day fairy tales, the monsters of our imagination have almost always served as manifestations of real-life fears. The varying interpretations applied to types of monsters throughout the centuries only tells us more about the complexities of our fears – and the new forms they take as times change. In this regard, vampires make for a particularly interesting study.

The ancient myth of the these nocturnal blood-suckers has seen countless interpretations. Vampires vary from repulsive to romantic. They range from gross to gorgeous and from malicious to misunderstood. Whilst some vampirical tropes remain essentially the same, other characteristics depend upon the type of vampire in question.

Representative not only of individual desires and fears, vampires have also come to reflect the ethical, religious and sexual culture of different eras, and in the process have revealed humans’ evolving attitudes with regards to everything from the supernatural and disease to fashion and relationships.

So with which type of vampire do you resonate most strongly – and what does that say about your outwardly self, as well as the dark secrets you harbour? Without further ado, here are the nine distinct types of vampires we’ve seen over the centuries. 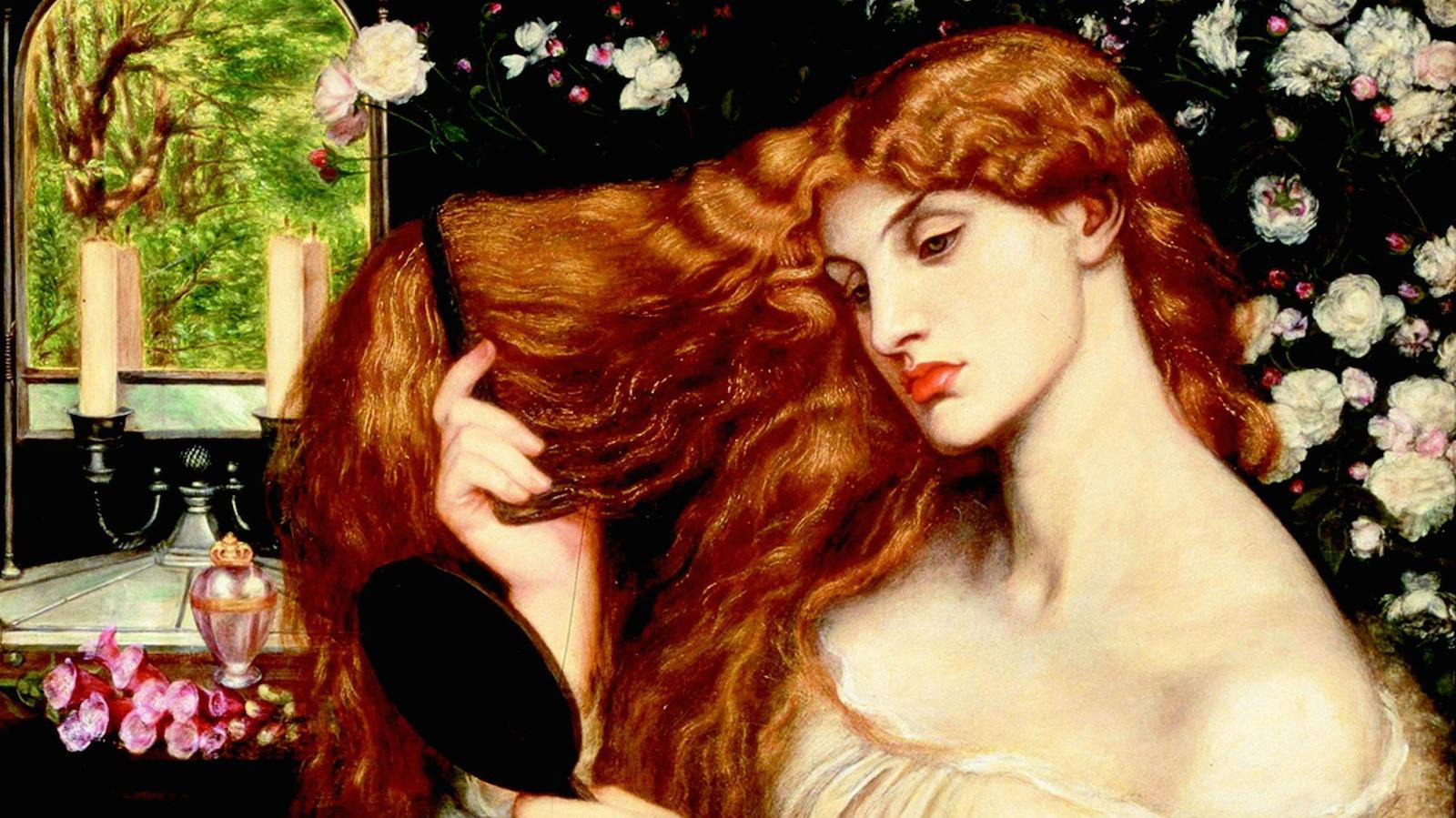 Lilitu of Ancient Babylonia was a beautiful night demon. She had long, red hair and – according to some accounts – big wings attached to her back. So far she seems pretty cool right? Except that she would steal babies in the dark of night and suck their blood. Hebrew mythology later claimed that Lilitu, whose Jewish name is Lilith, was Adam’s first wife – but she was way too disobedient and therefore replaced with the more subservient Eve. All in all, Lilith was a seductive but very sacrilegious lady. Ancient Greece also had a few contenders to the term ‘vampire’, but few quite so classically vampirical as Ambrogio.

Falling in love with mortal Selena, Ambrogio is dismayed to discover that the powerful Sun God Apollo wants her for himself. Apollo curses Ambrogio in a fit of jealousy, making his skin so sensitive to the sun that it would burn if he ever step into its light. So Ambrogio makes a deal with Hades, God of the Underworld, that if he can steal Artemis’ silver bow and arrow, Hades will make him immortal and thereby give him the powers to fight Apollo for Selena’s love. Ambrogio succeeds and is granted immortality, but now a very angry Artemis has placed a curse on him too. From now on, Ambrogio’s skin is also intolerant to silver. However Artemis eventually takes pity on Ambrogio, and gives him super sharp fangs with which to hunt. Ambrogio uses his fangs to kill beasts and write love letters to Selena with their blood. Romantic.

Examples: Ambrogio of Ancient Greece, Lilith of Hebrew folklore, Salma Hayek from From Dusk Till Dawn, incubi and succubi

What they’re good for: Making deals with immortals, tempting others to sin

What they represent: A reminder to abide by God, resist sin and don’t get flirty with a demon. 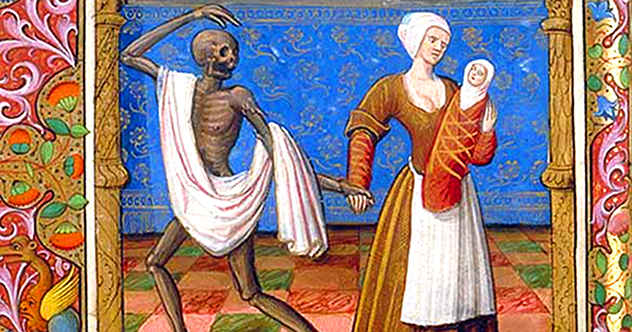 Just like food, hygiene, and pretty much everything else in the Middle Ages – vampires were gross. This was an era largely defined by disease and death (however some historians will point out that Medieval times weren’t quite so atrocious as we’re often taught). During this time, many villagers were so scared of vampires that they would bury anyone suspected of vampirism with a rock in their mouth, lest they rise from the dead and try to infect other corpses with their fangs. Sometimes the corpses of suspected vampires would be dug up and have a stake driven through the heart.

Vampire-hysteria was especially common in Eastern Europe, where peasants would hang garlic wreaths around the home, which were thought to ward off the undead. Notably, the myth of the vampire being able to take the shape of animals also originates from Eastern Europe Just like the most vulnerable in society (lower-class women) were the ones suspected of being witches – so too were they the ones most likely to be accused of vampirism. Belief in vampires was so strong and widespread across Europe that the hysteria carried into the Age of Enlightenment, when even respected physicians would write extensively on the symptoms of a vampire attack; shivers, fever, hallucinations, bleeding amongst others.

Examples: Anyone unlucky enough to cough up blood or have abrasions around the mouth during the Middle Ages.

What they’re good for: Dying from disease

What they represent: A warning to stay away from sick-looking people with blood around their mouths because they might infect you with disease. Good advice but a rather unsympathetic stance. 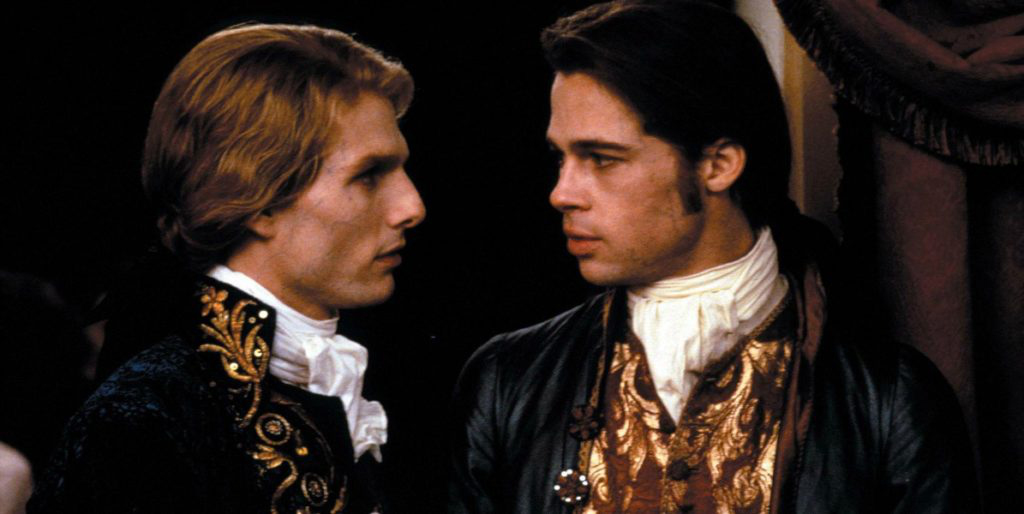 These hedonistic, aristocratic vampires are romantic, flamboyant and fabulously wealthy. They even use their wealth to maintain their vampirical lifestyle – such as by throwing lavish parties whereby they can prey on their impressed but unsuspecting guests. These vampires are irresistibly alluring because of their mystique, elite world and charming ways. Their civilized sophistication lies in contrast with the brutality of their blood-sucking ways, and so they represent duality and conflict – a common theme in all great Gothic literature. That conflict is also reflected in the poor souls who fall for them; the smitten victim knows that the vampire is dangerous and deceitful, yet loves them all the same. It’s forbidden romance at its finest, and it’s produced some of the best vampire fiction ever.

What they’re good for: Looking devastatingly glamorous, living luxuriously, being the subject of both hetero- and homosexual infatuation, being cruel and cold-hearted, using their wealth extravagantly

What they represent: A word of caution that the handsome, dangerous ones are always the ones to break your heart. Fall for their superficial charm at your own peril. 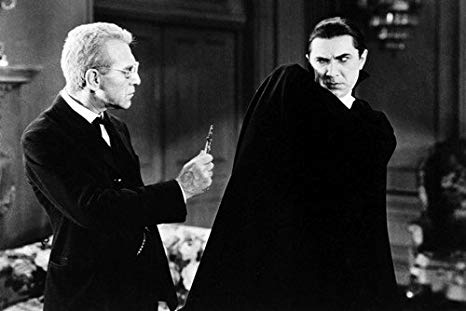 Angsty, depressive, dramatic, and wallowing in self-pity; these vampires should probably be seeking professional help for the heaps of emotional issues they’ve accumulated over the hundreds of years they’ve been alive. Instead, they’re sleeping in coffins and playing organ music. Vampires such as Bram Stoker’s Dracula have a self-destructive tendency, and a cruelty which is often portrayed as deriving from their victimhood. Can their malicious behaviour be excused because of their past heartbreak and emotional neglect? The answer is not clear-cut – indeed their characters are not intended to be black or white. Dracula is neither good nor evil. Whilst the real-life Dracula on whom Stoker based his character was most definitely a sociopath, these castle-dwelling vampires seems more sad than evil.

What they’re good for: Flaunting black capes better than Batman

What they represent: The failure of society to prevent troubled individuals from becoming evil. Alternatively; emotional pain that is bad enough to turn anyone into a self-pitying social recluse. 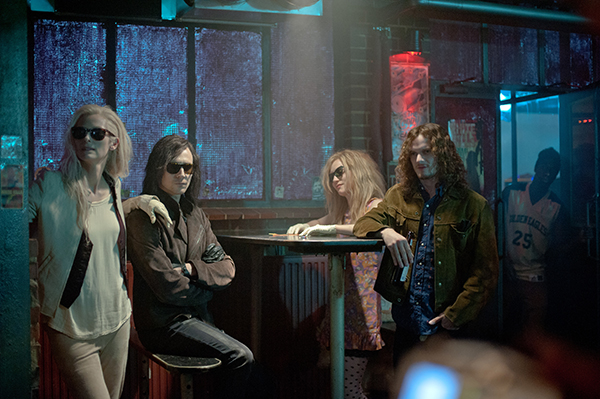 What do David Bowie and Tilda Swinton have in common besides their uncanny resemblance? They’ve both played stylish, tragically romantic, music-loving vampire socialites, of course. First it was Bowie and Catherine Deveau in the 80s vampire flick, The Hunger, before it was Swinton joined by Tom Hiddleston in the more recent Only Lovers Left Alive. These pale, skinny, alcohol-swigging vampires are portrayed as cool, vain and sexy.

Examples: Proinsias Cassidy, the What We Do in the Shadows gang, the vampires from The Lost Boys, The Hunger and Only Lovers Left Alive.

What they’re good for: The washed-out rockstar look, and partying too hard because they’re bored of living forever

What they represent: The concept that maybe party people are just modern-day vampires. They come out at night and feed on the fun of drugs, music and sex just so they can feel alive.

Some vampires are less complex than others, frightening us with their repulsive appearance, night-stalking demeanor and thirst for human blood – simply because of what they are, and not because of what they represent. These vampires appear in good old-fashioned horrors that are meant to send chills down your spine with every jump scare and terrifying close-up of bloodied fangs and yellowish eyes.

Examples: Nosferatu, the vampires from Salem’s Lot, 30 Days of Night and Daybreakers

What they’re good for: Scaring the bejesus out of people

What they represent: The idea that falling victim to a hideous, blood-crazed monster would be an unpleasant and terrifying ordeal 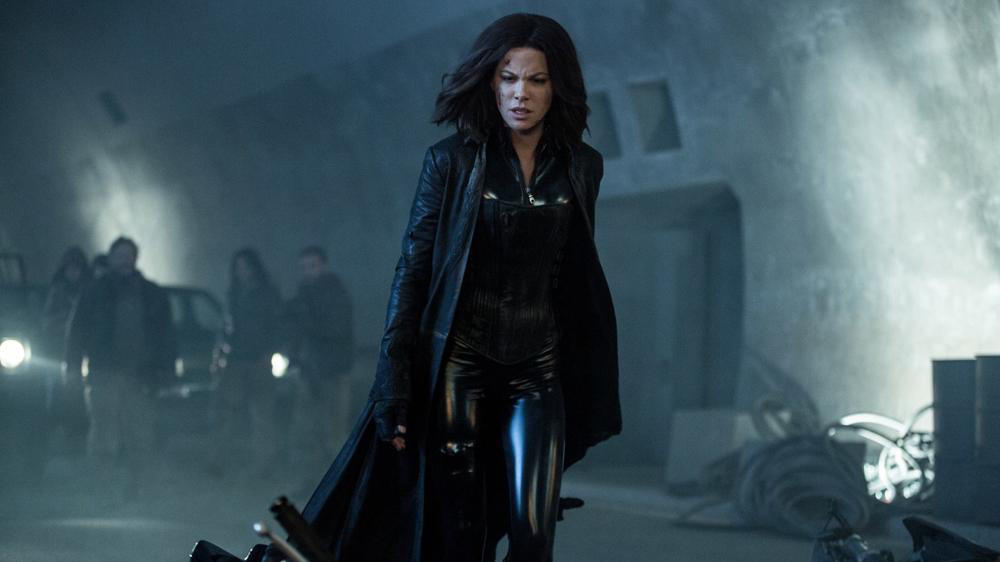 Technology made rapid advancements in the 90s and early 00s. For the first time, there was widespread access to the internet, and everyone was suddenly equipped with a mobile phone, portable music player, and other gadgets which just a decade earlier would have seemed incredibly futuristic. It’s perhaps not surprising, therefore, that a lot of classical genres received a technological ‘revamp’ – including that of, well, vampires. Just look at Blade, or Kate Beckinsale in Underworld. These vampires are classically 90s, with their glossy, cyberpunk fashion sense, and confident use of technology and weapons (which, at the time, seemed very modern).

What they represent: That vampires can adapt with the times and remain both relevant and cool throughout centuries 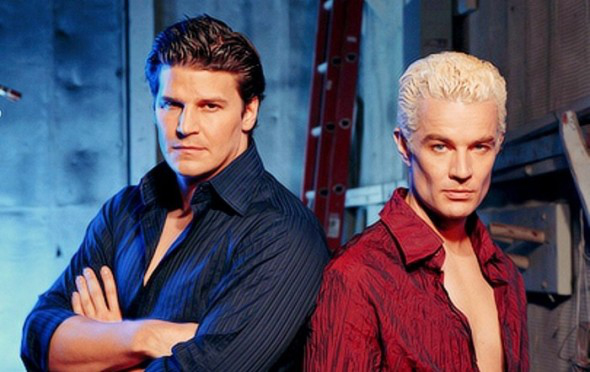 Were you shipping Angel and Buffy before ‘shipping’ was even a word in the internet dictionary? Then you know how frustrating the romance can be between a hero and the attractive but unavailable antagonist for whom they inevitably fall. Vampires underwent quite a transformation in the hit TV show Buffy the Vampire Slayer. Far from being sickly and scrawny-looking, the show helped establish that vampires can also be tanned, gym-going hunks. Who’d have thought? They’re still emotionally unavailable, however. That, at least, will never change.

What they’re good for: Eye candy, I guess

What they represent: “Maybe, if you just love him enough, he’ll change for you!” 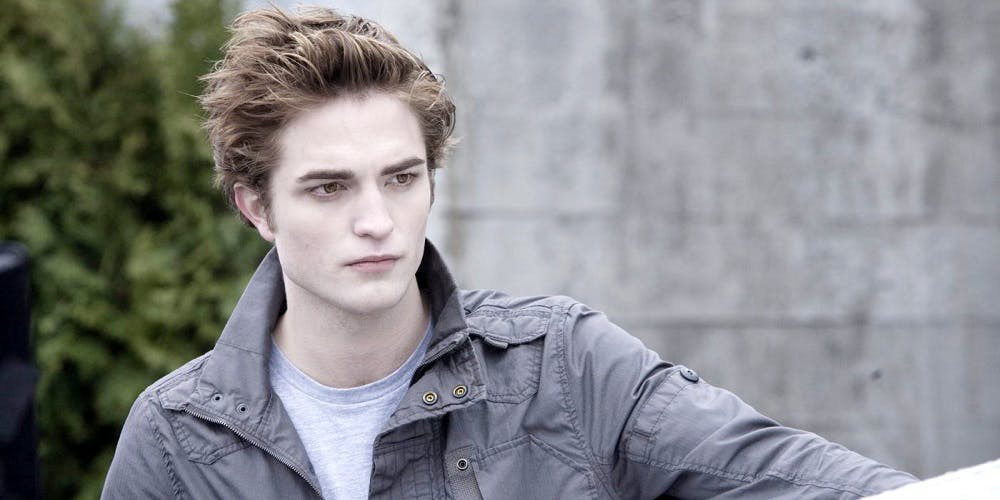 Similar to the ‘Emotionally Unavailable Hunk’ type of vampire, yet bearing some resemblance to the more classical, pale and fragile type of vampire that appeared in the mid-1800s, the High School Heartthrob was popularized with the phenomenally successful Twilight series, in which student Bella Swan falls in love with classmate and immortal vampire Edward Cullen. Their relationship is one fraught with tension and drama, not least because Jacob Black, a werewolf, enters the equation later in the series and complicates Bella’s feelings further. Though the Twilight series is a mere decade old, the character of Edward Cullen (who weirdly doesn’t drink blood, but does however ‘sparkle’) has been revisited in countless non-canonical fan fiction, rip-offs and parodies, including in the Tantalize book series and the story-based Immortal Romance slot game to name but a few.

What they’re good for: Literally nothing

What they represent: In the case of Twilight; Mormon morals. Alternatively, that women should really aim higher.

Crooked Construction – The Story of the Leaning Tower of Pisa