Audition was my first Takashi Miike film. This was nearly two decades ago, when I still worked at a video store. Before movies like Ichi the Killer or Visitor Q or The Happiness of the Katakuris had become common knowledge here in the States.

My wife – who doesn’t like horror movies or gore or torture or much of anything unpleasant, really – actually picked it out. I don’t remember why. We none of us had anything to go on besides that now-infamous image of Asami with her syringe on the cover. We didn’t know what to expect. We were in over our heads. How could we not have been?

The film traumatized us. For years afterward, when someone asked me what the scariest movie I had ever seen was – a common question, when you work in a video store – I would tell them it was Audition. I’m not sure that’s true anymore – I’m not actually sure it ever was – but I also don’t know what would replace it, making it true enough.

The film traumatized us.

Part of what makes Audition’s horror sequences so disturbing – even all these years later – is how disarming the rest of the movie is. In the more than one hundred films that Miike has directed over the course of his intimidating career, he has shown himself to be a master at manipulating the expectations of the audience, and nowhere is this more at play than in Audition.

It is 37 minutes into the film before we get our first indication that something is wrong; longer still before there is a genuine scare scene—though this is Miike, so when it comes, it is a doozy. Before that, Audition could be a Lifetime original movie, or the setup for a romantic comedy—which, of course, when we consider the manipulative and objectifying nature of the film’s central premise, provides a pointed skewer to our notions of romantic films in general.

Much has been written and said about Audition in the years since its initial release. Its exploration of gender roles both in Japan specifically and in society at large has been the subject of extensive essays by better minds than mine. Yet re-watching it now, in the midst of the #MeToo movement, it seems impossible to discuss it without also writing at least a little about those subjects. 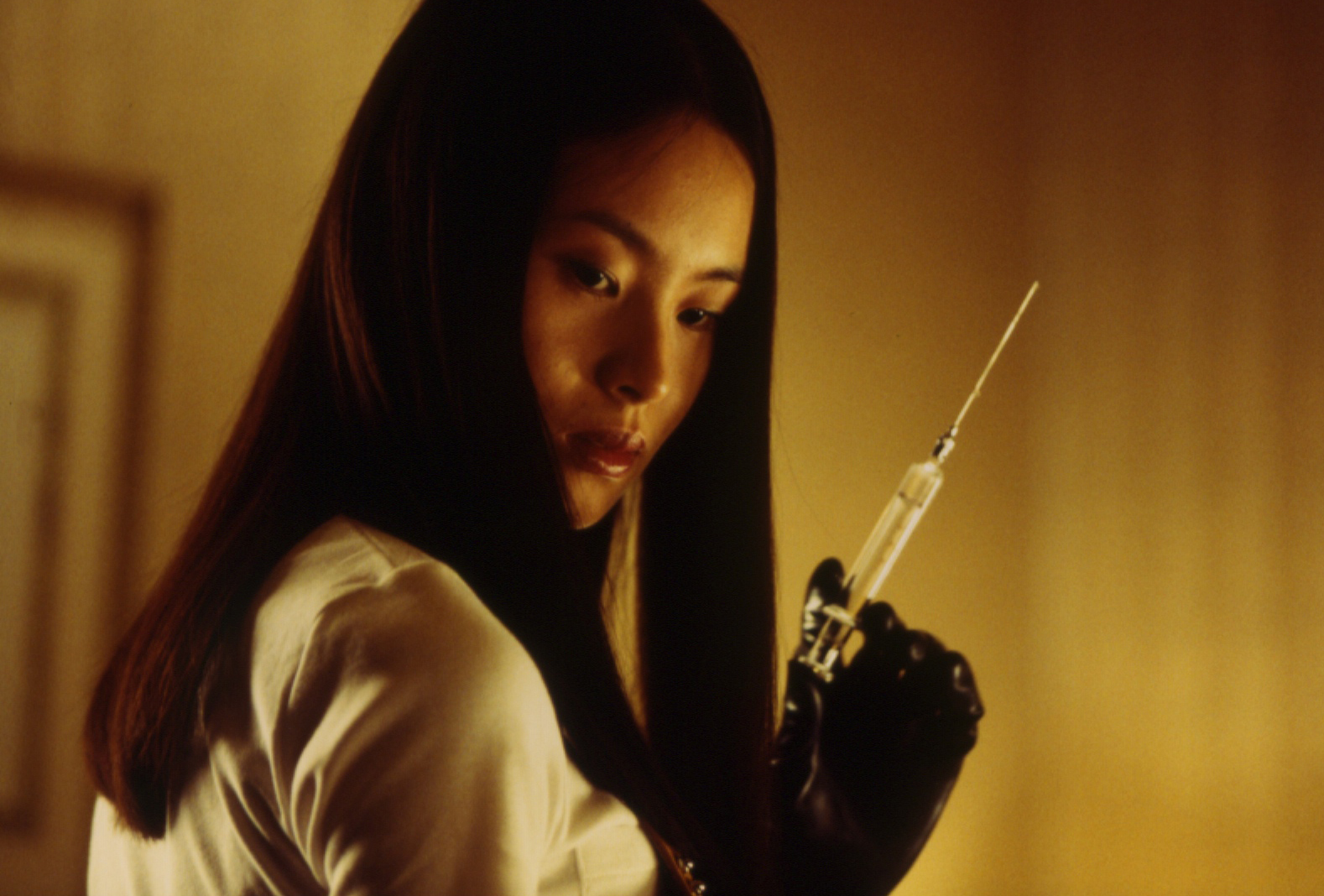 Like so many who saw Audition all those years ago, it was the horror scenes which were seared into my brain so that I remembered them vividly – yes, even viscerally – almost two decades later, with an intensity that couldn’t be dulled by time or distance or dozens, even hundreds, of other, often much more graphic horror movies.

The horror scenes which were seared into my brain so that I remembered them vividly almost two decades later, with an intensity that couldn’t be dulled by time or distance or dozens, even hundreds, of other, often much more graphic horror movies.

Yet even in the film’s infamous torture sequence, which Robin Wood describes as “almost as unwatchable as the news reels – of Auschwitz, of the innocent victims of Hiroshima and Nagasaki and Vietnam,” we actually see very little. The suffering and horror are conveyed to us instead through sound, through Aoyama’s flailing and through Asami’s singsong repetition.

Revisiting Audition for the first time in almost 20 years, I was struck by how little of what we see can be considered objectively real. Once the film’s horror has been revealed to us, our protagonist’s search for Asami takes on the strangely-lit unreality of a giallo film, and many of the picture’s horror sequences – such as a surreal shot of a flapping tongue, fingers, and an ear – take place entirely in his mind.

In fact, an argument can be made that the film’s entire second half is a dream sequence, an argument bolstered by the ways in which chronologies shift, break down and bleed into one another during the film’s climax. Whether or not that is the case, however, it seems undeniable that the horrors of Audition are as much internal as external.

Part of the genius of Audition is the way in which it makes the audience complicit in Aoyama’s wrongdoing. We like him, even while we know that the whole audition idea is skin-crawlingly dishonest and predatory. We allow ourselves to excuse him because he seems just as uncomfortable with it as we are. “I feel like a criminal,” he says to his friend as they sit down to begin auditioning the girls. He knows that what he is doing is wrong, but he does it anyway.

He knows that what he is doing is wrong, but he does it anyway.

Yet the film doesn’t judge him harshly for these acts. It leaves that to his own conscience. Through things like his relationship with his son, we see Aoyama as just a person. “All the character in this are just regular folks,” they say on the Blu-ray’s commentary track, “but regular folks have dark sides.”

Undoubtedly, there has been considerable scholarship dedicated to sorting out the “correct” interpretation of the movie’s puzzle pieces, but for me, the question of what is real and what isn’t is less interesting than the tension that is created by not knowing. Whether Asami is a vengeful sadist forged by a lifetime of abuse and sexual predation, or whether she is lying in bed beside Aoyama while he is tormented by nightmares of his own making, the horrors of the film are a direct result of his actions and it leaves us with the unshakable feeling that he wouldn’t deny that he deserves this suffering.

“Am I allowed to feel so happy?” Asami asks in what might be a dream sequence or a memory or reality intruding on a nightmare. Whatever else may be true in Audition, it is clear that Aoyama isn’t allowed to be happy, not yet, and he has no one to blame but himself. “Aoyama ends up like he does,” Miike says in one of the commentary tracks included with the Blu-ray, “and he is responsible for that.”

Wash Your Hands: The Story of an Epidemic in NYC