For me, this week stumbled out the gate with a toxic worm from the past spitting some vile bullshit in my direction, the kind of small circle gossip that’s not worth engaging with but can still infect your heart. After feeling relatively centered for a good part of my life, suddenly an influx of incessant negative thoughts buffeted most of my waking moments, as I tried to focus on work and maintain some scrap of positivity. These waves racked me, but I’m still fairly lucky, as many of my friends and fellow writers have dealt with much more depression for much longer. I tried to learn from the struggles they shared, focusing my energy to reclaim my own headspace. It’s an ongoing process, but the perseverance of those around me is a guiding star that I bow down in gratitude for.

This mental position, as one might deduce, is not the best state for a role playing game session. But I and a few members of the Unwinnable crew had been battling against the forces of adult living and stuffed lives for a while, and for once it appeared that the shot was lining up. Though I was a little tight in the chest, the feeling of ruining another scheduled meetup for Blades in the Dark at the last minute seemed like the kind of move to send me further spiraling. So I sucked it up and signed in.

I used to believe that RPGs weren’t for everybody, which is still true in the way that no single thing is perfectly suited for every human, but these games in particular are often thought to be fit for those who are at least interested in a visceral and performative experience. But the trick is finding a group that lets you spin a little silly in your own way, one that splits the balance between giggles and creatively smashing down those brass tacks. Who knew if this gang could wield that magic? Though we’d had a character generation sesh the attendance was incomplete, so this first would really determine the potentially long-tail of our little team. We’d settled on a band name: the Eels had set down into the Docks district of Duskvol, ready to smash and burgle. 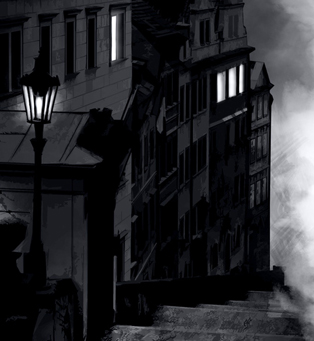 Blades in the Dark was new to most of us, myself in particular, as I’d yet to put significant time into a Powered by the Apocalypse-adjacent game other than a few light rounds in The Veil. Each of these variants relies on six-sided dice to determine general success or failure of any action that would have significant impact on the story the group is collectively weaving game by game. This one in particular is painted with wide strokes in the same shades as Dishonored and From Hell as well as the gothic classics, long nights and oily magic in a soot-soaked city that’s stuffed with loot and political intrigue. The group’s job, along with our stalwart and often disarmingly stone-faced GM, is to collectively unspool the narrative of our scores, complete with flashbacks and retcons, actions and re-actions to dice rolls that force our hands and story-telling reflexes.

We scouted, we prepped, we rode in. Contrary to common Dungeons & Dragons knowledge we split the party from the get go, setting up a classic strategy of distraction and hopefully tomb-quiet disinvestment. Rather than a meticulous setup of story-beat dominoes, Blades really pushes you to try an idea, succeed or fail, then flash back to how you might have logically prepared for either instance and try again. These moves are also the most fun when you can really steep into your character, and what’s more high school theater than dressing up in some bad cockney? For a brief time I was able to completely slip my own skin and roll. 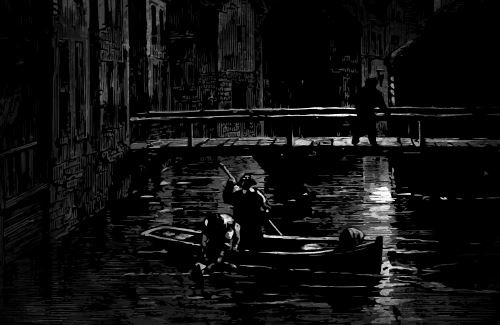 Paunch and I found a strumpet where one was definitely not expected, and fortune spoilt the forcible attempt to keep her quiet. This unfortunately resulted in a smashed bed and what certainly seemed to be the end of the easy way. But the downstairs crew blew on the bones and painted a scene of impromptu raucous camaraderie, the kind that might overshadow some second-floor furniture shenanigans and a very sketched-out sex worker who’s just trying to get along with her life. My character, thanks to a very desperate roll to sway that against convention actually hit high, managed to talk her back to the splintered heap of sheets. And with that, the Eels sauntered away, leaving poor Piggy unaware that his days remaining in gang middle-management were in the single digits.

I logged out feeling like I sloughed some grimy scales, fresh and flashy for the first time in a little while. Despite numerous internet-ological complications we kept the spirits high, helping our GM spitball potential twists when the dice threw him for a loop, all chirping up in service of the story. To appreciate the full breadth of Blades will certainly require a number of extra sessions, but for a few hours I successfully stepped into a whole new brain space, allowing my own neuroses and feedback loops to reset themselves. RPGs can help us appreciate the scope of life from the comfort of our swivel chairs, couches, and kitchen tables, allowing us the opportunity to find catharsis in scrambling out of a almost fully bollocksed job. If we can take some licks at the Golden Lamprey and still walk out with a bellyful of a gold ring and coded transmissions in hand, surely I can find permanent comfort from the interpersonal indignities of daily life, given perspective by this lovable gang of sea-shanty-shouting hooligans.

Blades in the Dark, RPG

Escape from the Sweet Board Game Bubble

Not Your Enemy – Family Dynamics and the Disappointing Adult in JRPGs