Memes are the language of the internet, a natural outgrowth of an increasingly digital age. Memescape dissects them in the hopes of finding some sort of explanation beneath the collective lol.

On the internet, content lifespans move at a dizzying pace. In the past month or so, we’ve seen the Philadelphia Flyers new mascot, the googly-eyed, rotund monster known as Gritty, start life as an embarrassing publicity stunt and grow into an obsession, then a movement and, finally, the beginnings of a cult. Recently, he also gained the official blessing of his home city, becoming the first Philadelphia mascot to be welcomed by a formal resolution from the city’s council. The document’s truly worth a read, in particular, because it sums up Gritty’s bizarre trajectory into the public conscious perfectly:

“Gritty has been described as a 7-foot tall orange hellion, a fuzzy eldritch horror, a ghastly empty-eyed Muppet with a Delco beard, a cross of Snuffleupagus and Oscar the Grouch, a deranged orange lunatic, an acid trip of a mascot, a shaggy orange Wookiee-esque grotesquerie, a non-binary leftist icon, an orange menace, a raging id and an antihero. He has been characterized as huggable but also potentially insurrectionary, ridiculous, horrifying, unsettling and absurd.”

To understand why the internet and, later, the far left co-opted the hairy cheese ball so quickly, you only have to look to his debut. There’s something fantastically wacky and magical about his reveal: the completely serious, ESPN-esque animatic echoing on a sea of screens behind him as he makes his entrance, silhouetted by a blinding light show. And when he steps out, we finally see it. The jiggling, wide-eyed monstrosity that is Gritty. The walking equivalent of a big, wet trumpet blast. 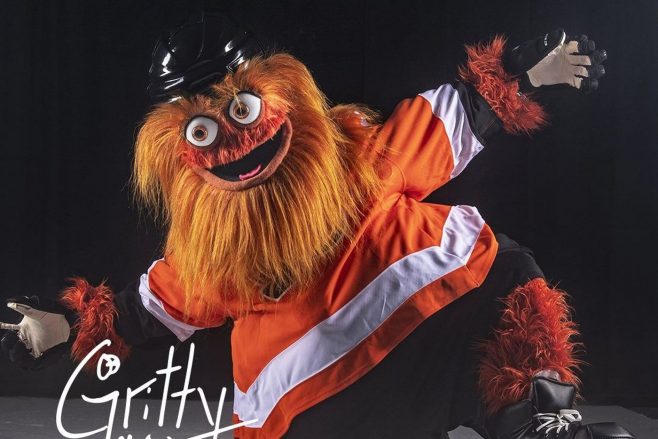 Talented but feisty, his biography reads, loyal but mischievous. And he proved it in his first game, the Flyers vs. the Boston Bruins on September 24. During the game, he bounded around the ice, wildly shaking his belly and constantly slipping on the ice. Instead of shooting t-shirts into the crowd at intermission, he turned the cannon on those around him, firing with a crazed look in his eye (ok, maybe that’s just how his face is). He’d continue this tomfoolery in later games, getting sent to the penalty box after body-slamming and kicking fans on the ice during intermission. By the end of the game, fans were already commenting about relatable his untargeted anger and boundless enthusiasm seemed, several tweeting about how “we are all Gritty.”

Philadelphia fans originally responded with shock and disgust at Gritty’s design, rolling their eyes at the NHL’s obvious attempt to connect with a younger generation of fans. But as the rest of the world began to comment on how demented looking their new puppet mascot was, Philly surged with local pride and immediately pivoted inward to protect their new “national treasure.”

Much of the internet moved with them. It helped that the bug-eyed fuzzball seemed born for memes. When the Pittsburgh Penguins responded to his reveal with a chiding “lol ok,” the Flyers responded with “sleep with one eye open tonight bird” accompanied by the lidless face of Gritty staring at the camera. The Daily summed it up wonderfully: “Nothing—and I repeat, nothing – endears yourself to Philadelphians like threatening to kill a guy for trashing on your city.” Adding fuel to the fire Gritty had already clearly started, the Flyers posted a picture of him after his initial game imitating Kim Kardashian’s infamous champagne photo. 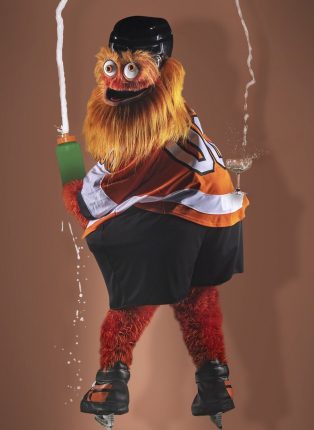 In her essay From Tusk to Tail: Understanding the Animal Attraction to College Mascots, communications professor Dr. Lisa Lyon Payne explains that mascots stoke “an emotional connection that overpowers our innate aversion to creepy or ugly,” explaining Gritty’s appeal to such a mass audience despite his appearance. After all, the students at the  University of California-Santa Cruz’ mascot go crazy for a freaking banana slug; it’s even won best mascot awards from ESPN and Reader’s Digest.

Payne goes on to explain that most mascots represent “non-human aspirations of our winningest selves” with strong physical attributes that demand respect, likes lions and bulldogs, or embody our patriotic sensibilities like eagles. Which makes one wonder what the Philadelphia and the internet at large see in the orange beast; perhaps it’s “[a]n overt lack of restraint and disregard for decorum,” as Payne suggests, or maybe it’s his crazed, directionless anger, something we wish we could act out as he does. Whatever it is, the internet sees a bit of themselves reflected in the blank stare of Gritty’s eyes.

Furthermore, mascots with real-life animal connections are expected to behave like those animals, Payne explains. Robbed of these connotations and restrictions, Gritty can become anything you want him to be, and yet, he chooses to act like a hapless, slightly vindictive adult, something millennials especially can relate to as they struggle to metamorphosis into proper adults themselves. Finally, Payne says that loyalty to a tribe elevates the symbols representing that tribe, so that mascots, regardless of species, are not only humanized but treated like celebrities, explaining Gritty’s cult-like status.

After his introduction, Gritty’s subsequent adoption by the far left was swift and comprehensive, but many point to a tweet by socialist magazine Jacobin stating simply “Gritty is a worker” that lit the spark. It might have swiftly faded, though, if it weren’t for a trip to Philadelphia by President Donald Trump coincidentally scheduled less than two weeks after Gritty’s reveal.

What might have been a fleeting joke spread like wildfire among those protestors the president’s presence, and soon signs began cropping up bearing Gritty’s image with slogans like “This town only has room for one orange asshole” and “Gritty say ‘G.T.F.O. of Philly!’” “Gritty hates Trump” chants could be heard from the marchers as well. Not long after, Antifa International posted about the mascot’s new significance, anti-capitalist artwork began spreading and one fan particularly dedicated to the joke made the Fellow Worker Gritty Twitter account, which currently sits at nearly 10,000 followers.

As to why the far left fell in love with Gritty, psychology professor Dr. Craig Jackson points to his working-class name, nonverbal expressions, and amorphous features, which blend humor in his babyish eyes with hostility, a.k.a his shaggy hair and intimidating blank stare.

“So, his fun and humorous element might be responsible for his initial appeal, then some people may have identified with some of his other qualities and embellished them to fit their own identities,” he said. “Similarity, perceived or actual, and repeated exposure tend to promote attraction as well, which would lead to even greater appeal among adopted groups.” In short, we really are Gritty. 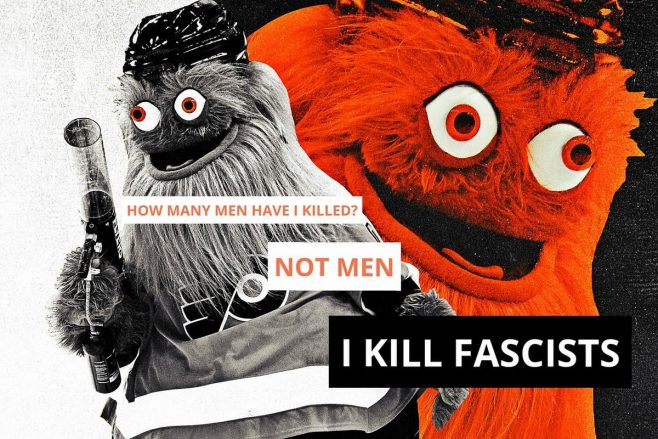 Similarly, Payne wrote that mascots “are elevated – even repulsive and ridiculous ones – and in doing, they bring out the best and worst in those they represent . . . We adore them and like to think they adore us in return . . .”

To me, it all seems obvious. We’re in an utterly ridiculous time in the year of our lord 2018. Gritty, with his eyes askance, wobbly belly, and shock of orange hair embodies the crazy inner turmoil anyone left of center is experiencing right now, either 24/7 or whenever we dare to sneak a peek at the incessant minefield of daily news.

The alt-right had to make a concentrated effort to claim their mascot, using provocative and violent Photoshops to reclaim Pepe the Frog from “normie” culture and, in doing so, championing his role as an icon for bigotry. Meanwhile, Gritty seems to have fallen into his role quite literally. At the aforementioned resolution’s signing, Councilmember At-Large Helen Gym summed up in a statement why everyone, especially the left, has adopted Gritty as their own, especially at this point in time:

Alyse Stanley is a trash can disguised as a journalist. She’s constantly knee-deep in fandoms when she’s not writing about video games. It’s been nearly a decade, and she’s yet to shut up about Fallout: New Vegas. You can find her on Twitter at @pithyalyse.

Hate to Lose, Love to Win