In the run up to St Patrick’s Day I floated the possibility to Stu about republishing an older piece of mine that I held very close to my heart. It’s nearly four years ago since I wrote “What Does It Mean To Be An Irish Character In A Videogame?” for the now undead publication Kill Screen. Part of me just wanted a space to preserve the article and save it from the limbo in which it languished. Reading it through again after all this time, though, it came across as a little dated. Four years isn’t that long a time but I guess a lot has happened, especially in an industry that refuses to apply the brakes. I instead opted to host it on my personal blog and thought it might be nice to revisit it under the light of days gone by.

Even writing this column now, I find myself interrogating Irishness. For a long time, I’ve been carrying around a sense of homesickness. It sits in the pit of my stomach and is heavier some days, lighter on others. It’s coming up to my 10th year in Scotland and hitting that milestone will mark the longest I’ve lived in one place. I’ve picked up a bit of an accent in that time, but I’m still recognizably foreign to most people here when I open my mouth.

I think as far as stereotypes are concerned, the big industry powerhouses have made progress. My original piece took aim at a lot of the surface level shite that was muddying the waters at the time. The drunks, the brawlers and the bad accents. It was needed because these things were so visible. That’s why I centered my article around Catherine O’Hara from Valkyria Chronicles. She was unassuming and that drew me to the character. I had finally found someone whose core personality trait wasn’t simply the word IRISH written across their forehead.

Changes have come to pass. 2016’s Call of Duty: Infinite Warfare had the Irish character Brooks in its supporting cast. It was never really remarked upon, but the Irish tricolor was always present on his uniform. Him simply being present said a lot about that world’s political structures and ideals without having to say a word. Overwatch also has the Irish hero Moira, whose accent seemed to confuse a lot of internet commenters, proving that vast swathes of the internet have never actually met a real Irish person.

Not that there aren’t still missteps. Fallout 4 had an Irish character called Cait. She had a bad Oirish accent, she was an addict, a victim of domestic abuse and a brawler you befriended in a boxing ring. It’s like she was copy and pasted from Stereotypes for Dummies. This is because Bethesda are a trash company, who think strong writing begins and ends with presenting the option to nuke a town as some deep moral choice. It’s sad that I’m not surprised this was never brought up in any of the reviews as being unacceptable. 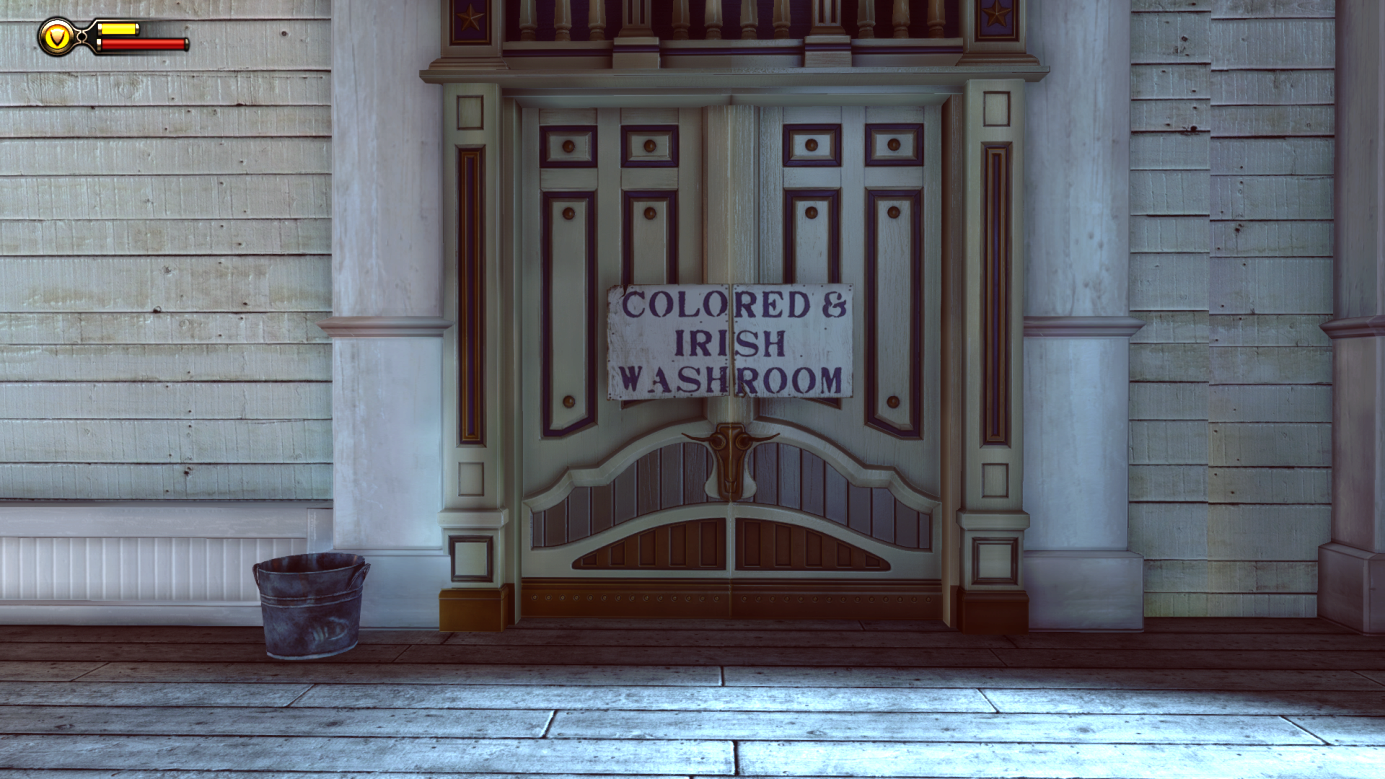 When I re-read the Kill Screen piece, Bioshock Infinite was the game that kept popping into my head. Released a year before I’d written it, I’ve grown to loathe this game. It’s a game that presents the working class of Columbia to be comprised of both white Irish Catholics and African Americans who are both on equal footing. It never interrogates the history of Irish people pushing down on African Americans in order to climb the ranks of American society. In light of the rising prevalence of the Irish slaves meme today, which is a disgusting pack of lies used by racists to derail conversations about the Black Lives Matter movement and issues surrounding black communities in the US and all around the world, Bioshock Infinite has not only aged poorly but is peddling a narrative that is actively hostile.

My original article does come across as very defensive, which may not be surprising given the environment in which I wrote it. In trying to knock down what I saw as hurtful, I think I was too quick to latch onto positive stereotypes to counter them. Reading it back made me feel a little uncomfortable. I was happy to indulge in the story of the little nation that could. The problem is that’s still a very narrow view of Ireland. One that has always favored white, straight men and it’s those people who have held Ireland’s reins for far too long. My view on what it is to be Irish was far too restrictive.

There’s an Ireland I’d never considered. Like the deeply Catholic country where the people voted to legalize same-sex marriage by referendum in 2015. On May 25, 2018, those same people will hopefully vote to repeal the eighth amendment and liberalize the country’s strict abortion laws. Ibrahim Halawa, an Irishman from Dublin, finally got to return home after being held in an Egyptian prison for four years without trial in October 2017.

Some days I’ll wake up with the familiar homesick feeling in my stomach and I’ll be much more honest about what it really is. A deep-set loneliness. Brexit has, in a very real way, severed my connection with Scotland. Even though they voted to Remain, there’s an abiding sense of isolation I can’t shake. I plan to move back to Ireland if I can, preferably before the UK crashes out of the European Union. I want to get to know it. I know if that happens, I’ll still feel like a tourist in my homeland. I’ve been away for far too long for that not to be the case. In cutting through the caricatures and cultural chaff all these years later, I think I’m seeing Ireland for the very first time. Four years feels like a lifetime and I hope I’ve used them well.

So what does it mean to be Irish? Let’s find out together shall we, because fuck if I know.