Saying “JoJo’s Bizarre Adventure is influential” is a bit like saying “that guy Walt Disney sure made a memorable cartoon mouse.” At this point, you’d be better disposed trying to find media not traceable to JoJo, because it’d be a shorter list.

If you’re not familiar, here’s a breakdown. JoJo’s Bizarre Adventure is a manga about burly softboy Jonathan Joestar and his descendants as they battle vampires, godlike beings and suspicious plates of spaghetti. It first ran in the late 1980s and draws heavy inspiration from Fist of the North Star (which now has a new game out by the studio that makes Yakuza… you see how this all connects).

Over time, the manga has developed a highly distinctive style, filled with beautiful androgynous characters in outrageous poses and avant-garde runway fashions. Reading Hirohiko Araki’s manga now (or watching the anime adaptation, which is so faithful it even reproduces the comic’s sound effects) feels a bit like encountering a pop art Rosetta’s Stone. Its influence is so pervasive, the original seems reminiscent of everything and nothing all at once. It’s so big, it’s been featured at the Louvre.

Persona, Atlus’ series of Japanese RPGs drawing from real life urban settings, doesn’t quite enjoy JoJo levels of popularity – but it’s also way younger. The first Persona game arrived on the scene in 1996, when JoJo had already been a comics mainstay for nearly a decade. The whole concept of Personas in the game is highly reminiscent of the Stands in JoJo, to such an extent that Atlus not basing the idea at least in part on Araki’s manga seems way more unlikely. I mean, Araki and Atlus co-founder Kazuma Kaneko have even interviewed each other about it.

But for the purposes of this article (itself the result of some late-night Twitter rants) I’m most interested in the fourth installments of each series: Diamond is Unbreakable and Persona 4. Because when people say JoJo is influential, we almost always talk about its art style, but in this case, Persona 4 bears a lot of resemblance to JoJo’s story and setting as well.

Just to be clear, I’m not the first to draw this connection. But there are also a lot of specific touchstones I’d like to draw attention to here, ones which point maybe to some shared values between their creators.

Lastly, it should go without saying, but this article contains major spoilers for both Diamond is Unbreakable and Persona 4.

In Diamond is Unbreakable, a group of (mostly) teenagers endowed with special powers search for a serial killer hidden somewhere in their small town of Morioh. These teenagers, known as Stand users, all happen upon their powers one by one and have to face their own inadequacies and flaws in order to fully harness their abilities, after which they ally with each other and eventually stumble upon the greater mystery plaguing the town. Our protagonists balance ordinary high school life with supernatural events and grisly murders, culminating in a confrontation with the killer, who also turns out to be a powerful Stand user.

In Persona 4, a group of teenagers endowed with special powers search for a serial killer hidden somewhere in their small town of Inaba. These teenagers, known as Persona users, all happen upon their powers one by one and have to face their own inadequacies in order to fully harness their abilities, after which they ally with each other and eventually stumble upon the greater mystery plaguing the town. Our protagonists balance ordinary high school life with supernatural events and grisly murders, culminating in a confrontation with the killer, who also turns out to be a powerful Persona user.

Both follow themes of civic pride and protecting the status quo

The anime version of Diamond is Unbreakable opens with a community radio show, which continues to serve as a framing device throughout the series. Persona 4 does something very similar with its regular weather reports and TV news pieces, which set up and resolve each chapter. We get lovely establishing shots of each peaceful town and its slice-of-life charm, and everything seems perfect – until we come upon a corpse.

Neither JoJo nor Persona invented the idea of “small idyllic town existentially threatened by sinister forces,” obviously. But I’m pretty sure they’re fairly unique in both visualizing this with dead people hanging from telephone wires.

Most of the core casts in Diamond is Unbreakable and Persona 4 are long-time residents of their respective towns. They know the surrounding area well and love living there, despite the small town atmosphere not offering much of interest for your average teenager. In both stories, the existence of a killer living anonymously as an ordinary person in their beloved town is an immediate call to action.

Persona 4 is a little more textured than DiU in how it chooses to depict Inaba. There’s an ongoing subplot about a franchise store driving the local mom-and-pops out of business, for instance, and its main characters are a little more candid about how oppressive small town life can feel. But both stories are fundamentally about young people embracing their local communities and going to extreme lengths to prevent something from changing them.

Both stories explore gender and sexuality

Diamond is Unbreakable’s Jotaro Kujo and Persona 4’s Naoto Shirogane are both outsiders in their respective communities, and they both kind of come at gender sideways. Naoto is conflicted about living as their assigned gender in a deeply misogynistic world like law enforcement, while Jotaro just kinda shows up in the suburbs one day literally wearing an androgyne symbol on his hat.

To be fair, JoJo’s relationship to gender and self-presentation hearkens back to its creator, Hirohiko Araki, and also has a lot to do with its musical influences – especially Prince and Queen, in the case of Diamond is Unbreakable. So it’s tempting to look at something like Jotaro’s hat and think it’s empty signage, in the same way we don’t tend to attribute deep meaning to the hearts and peace sign on Josuke’s outfit. 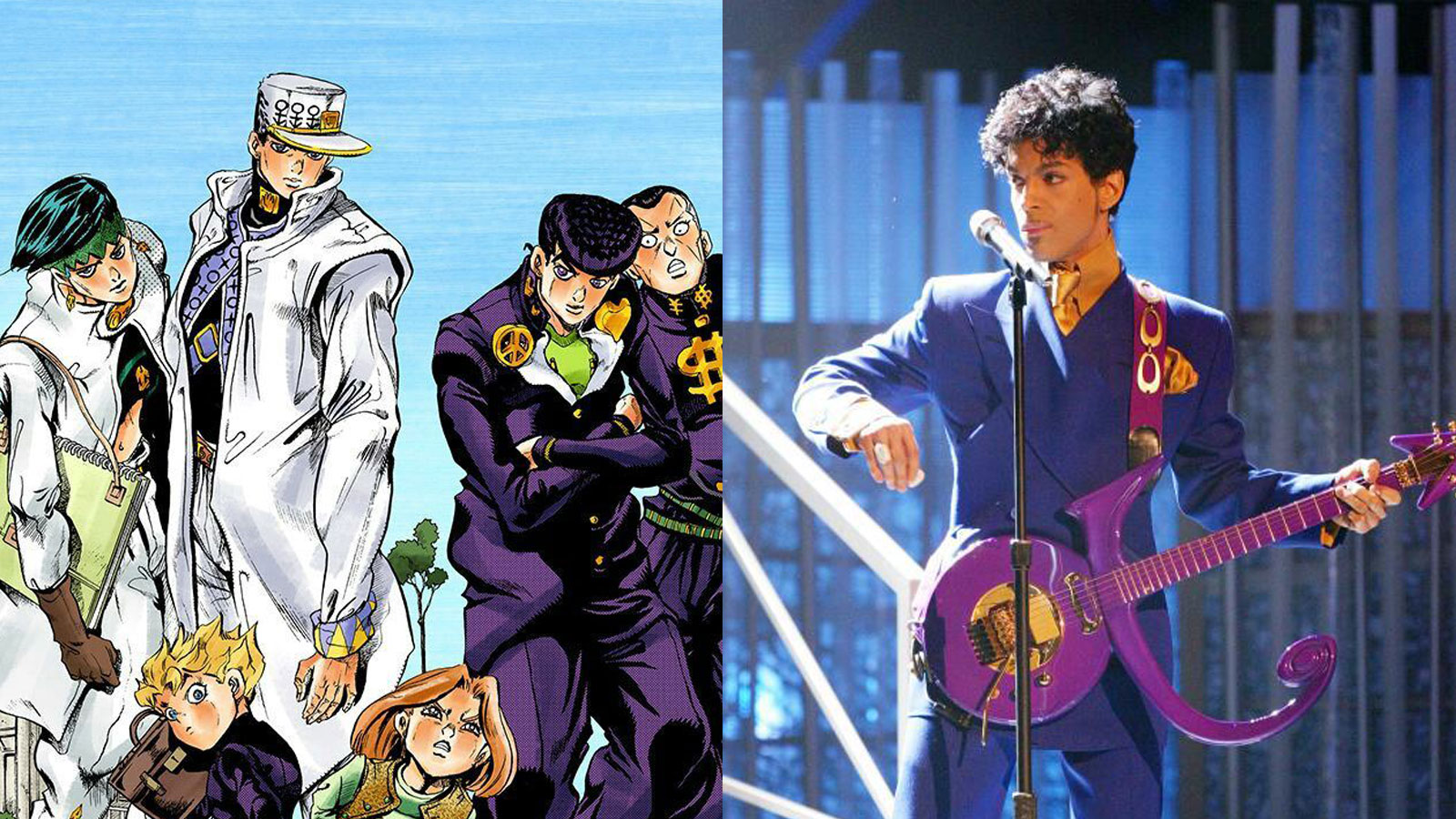 I’d argue that’s a mistake on multiple levels. Jotaro Kujo is non-binary as fuck and you can’t convince me otherwise. But it is true that DiU doesn’t really explicitly interrogate gender the way Persona 4 does on several occasions. Maybe that’s for the best, considering P4 and several other games in the series are ~wildly queerphobic~.

Unlike many of the points on this list, this one is almost definitely a coincidence, or at best the result of a casting director having a little fun. Voice actor Showtaro Morikubo plays Yosuke Hanamura in Persona 4 and also plays minor villain Akira Otoishi in the anime version of Diamond is Unbreakable.

I mentioned this above, and I only include it here because someone’s going to get at me on Twitter if I don’t. So let’s quickly break it down:

Stands are manifestations of a person’s will, usually anthropomorphic, with abilities that reflect some aspect of their user’s personality. They usually emerge only under extreme circumstances and non-Stand users can’t normally perceive them.

Personas are manifestations of a person’s will, usually anthropomorphic, with abilities that reflect some aspect of their user’s personality. They usually emerge only under extreme circumstances and non-Persona users can’t normally perceive them.

Additionally, when Stands first appeared in the third arc of JoJo’s Bizarre Adventure, they were each associated with a Major Arcana tarot card. Araki eventually abandoned this motif, but the Persona series still uses it.

Both draw upon subconscious fears about technology

This is a little more abstract than the other points on this list but bear with me.

Persona 4 explores the idea of inner self versus presented self, and does this mainly through the motif of mass communication. Rise Kujikawa is a TV idol who struggles to switch off her “performer” side; Adachi’s victims appear on a haunted TV channel as magnified distortions of their fears and anxieties; victims who fail to escape the “TV World” in time reemerge as corpses hanging from telephone wires.

In Diamond is Unbreakable, many antagonist Stands have some association with technology. Red Hot Chili Pepper travels through power lines; Super Fly is fixed to a transmission tower; Heart Father haunts photos taken with a Polaroid camera. Even Killer Queen uses timers, remote detonators and automated devices as major components in its attacks.

The concept of “haunted media” isn’t unique to anime and manga; it’s at least a century old and the subject of Jeffrey Sconce’s very good book by the same title, which I highly recommend. But I do think it suggests Persona 4 and Diamond is Unbreakable are drawing from the same thematic well, so to speak. They’re both stories in which peaceful suburban communities are threatened by the supernatural and the form that supernatural usually takes is a subversion of “benign” technology. 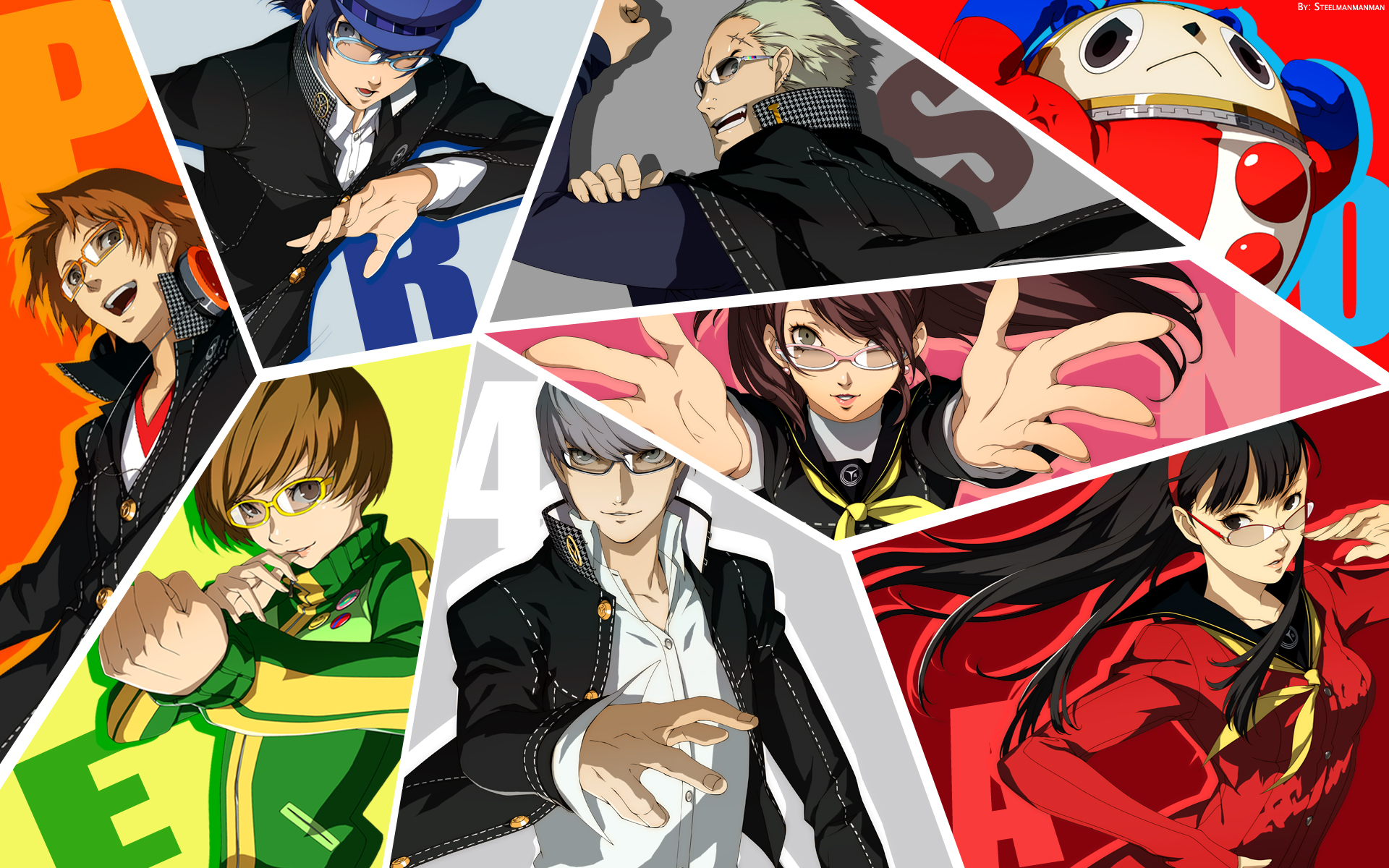 When I was young, say 12 or so, a friend showed me a webpage comparing the anime Neon Genesis Evangelion and the JRPG Xenogears. It infuriated me, especially the final line which suggested that since Evangelion had released first, Xenogears was merely a “ripoff.” Way to cheapen what is actually an amazingly ambitious game, random website from 20 years ago.

I don’t want to imagine anyone seriously believes that Persona 4 “rips off” JoJo’s Bizarre Adventure, but in the course of researching for this article, I found a handful of people asserting exactly that. We can comfort ourselves in thinking these are the observations of young people (as a former kids’ game mod, I’ve heard more than one explanation for why Lego “totally rips off” Minecraft). But the truth is, even as adults we sometimes fall into a trap of believing that inspiration and homage are bad things only trash media can be guilty of; that adaptation is the same as intellectual theft.

On the contrary, I see Diamond is Unbreakable and Persona 4 as beautiful extensions of one another. They are both humanist, nostalgic and provoke the same protective fondness for their casts. Moreover, since JoJo was lesser known in the West at the time of Persona 4’s release, you could argue P4 serves an important function, introducing its “JoJo-ness” to a wider audience. (Of course, I’m glad the JoJo anime has led to an even greater explosion of Western interest. I myself am a recent convert.)

Most importantly of all, though: If you (like me) just straight up hated Persona 5, there’s a whole ‘nother manga and anime you can dive into to get back that feeling of hanging out with some good kids in Inaba. What could be better?

Lore’d of the Rings: The Horror of Knowledge

Imprisoned in Paradise: The Leper Colony of Hawaii