I’ve been thinking a lot about radical positivity. About how, in a world full of objectively horrible things and an even greater volume of subjective nastiness, the most defiant act is to be kind.

That’s sort of the premise of Skull-face Bookseller Honda-san, a new anime about the soul-crushing world of retail. Based on a digital comic by the same name (which in turn is based on the artist’s past experience as a bookseller), it follows a literal skeleton named Honda and his Halloween masked colleagues as they stock shelves, attend job training, and deal with difficult customers.

Honda’s shop is based in metropolitan Tokyo and mainly geared toward comics, art books, and light novels, so it sees a great deal of tourist traffic. Luckily, our skeleton man speaks English! Sort of. 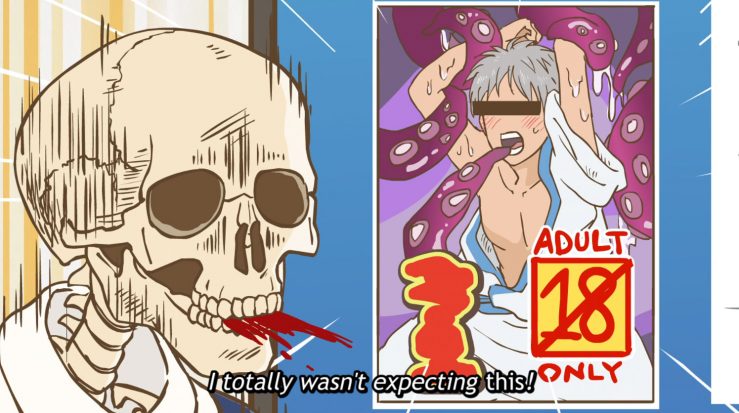 Instead, Honda approaches his work with an almost supernatural level of patience and earnestness. It isn’t that the job isn’t physically and emotionally exhausting – it reaaaally, really is; the series doesn’t shy away from depicting the death-by-a-thousand-cuts nature of retail – but Honda just overflows with compassion for the people he meets. And I think it’s that baseline rejection of cynicism that makes the show such a joy.

When a woman with an interest in BL (boys’ love) comics comes up to ask him which of the characters on the cover is the “bottom,” he helpfully removes the plastic wrapper so she can check it herself. When she flips to a page that interests her (presumably a sex scene), he watches her expression change and remarks to us, the viewer, just how pleasing it is to see books change people.

The history of BL and its relationship with real LGBTIQA issues in Japan is obviously a complex one. There’s no denying some works are fetishistic or use gay male characters as stand-ins for heterosexual dynamics, but there’s also a lot of BL which falls outside this. And even when the material itself is fraught in origin, fans outside the intended demographic have a marvelous ability to reclaim and enjoy it for themselves: in another scene, we see a gay couple absolutely thrilled when Honda presents them with his store’s great wall of BL comics. The joke is possibly that these foreigners don’t “really” know what they’re buying, but I honestly don’t think that’s what the scene is getting at – these guys just legit like BL, even if it isn’t “for” them. The show doesn’t go into the politics of where the genre comes from or why it appeals to the people that it does; Honda just accepts that it’s what his customers are into, and is glad when he’s able to make them happy.

Skull-face Bookseller Honda-san has a lot of oddly sweet moments like this. When a young Swedish woman apologizes for her stilted Japanese, Honda reassures her that he can understand her perfectly. When a famous manga artist passes away, his store puts all of the artist’s published works on display, which overjoys an elderly patron looking for one of the artist’s earlier books. Honda absorbs people’s joy like an emotional sponge. Even when customers confuse or scare him, he typically comes away with an optimistic, non-judgmental observation of the “it takes all kinds” variety. 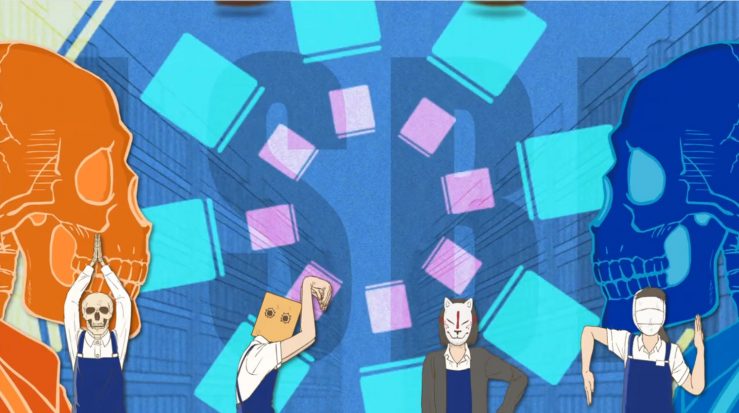 I like doing things for people. I don’t consider this a marker of moral superiority or anything – it just feels good to do it, so I do. I’ve worked my share of shit jobs over the years, and I relate so painfully with Honda. Not just because of everything he has to put up with, but his baseline desire to be helpful, in spite of it all.

In another vignette (episodes are only about 12 minutes long and usually cover two stories), Honda is sent off to customer relations training, only to discover the “training” mostly consists of mastering a service worker smile. It’s truly horrifying, and relatable, but one thing the instructor says is absolutely correct: smiling is a muscle.

Actually, smiling involves about 10 muscles (and it doesn’t take more energy to frown). But Japanese doesn’t differentiate between singular and plural, and also, I think it’s more helpful to think about it metaphorically.

Radical positivity is not a state that, once activated, is forever locked in the “On” position. Positivity takes energy and practice. Empathy, compassion, a desire to be helpful – these are things that come more naturally to some folks than others, but we all need to work at refining and improving them.

That’s what I find so charming about Skull-face Bookseller Honda-san: it shows just how stressful and difficult dealing with people can be, and how it can be rewarding anyway.

The Unstable Sexuality of Joji