Neighbor is a middling horror story that actually wants to be a rom-com and spectacularly fails at both.

The biggest mistake you can make while reading Neighbor is harboring expectations that this visual novel will read like other Japanese horror media.  There are no psychics here, no vengeful spirits whose wrath cannot be appeased by mortal means, no cathartic yet melancholy ending.  It’s merely a ghost story that happens to be set in Japan that actively strips the tension and fear from its plot, leaving the audience more confused than horrified. It’s also unfortunately the way I started my month of spooky horror VNs.

Neighbor follows Kae, a young woman who has just moved into a new apartment in a small city.  Wanting to make a good impression on her neighbors, Kae proceeds to visit all the apartments that directly touch hers (above, below, and on both sides) to offer them small gifts.  One of her first stops ends horrifically with the tenant jiggling a doorknob before opening the door and poking out a hand (gasp!). Something about this doesn’t feel right to Kae and she bolts down the hall screaming.  From this point on, she’s haunted.

If my description above doesn’t sound particularly horrifying that’s because it wasn’t, even reading this alone in a dark room at 1 a.m with earbuds.  There was almost no buildup before running into the ghost like this, and most of the commentary we receive from the neighbors afterwards regarding the mysterious nature of apartment 202 fails to add to the tension.  It’s like yeah, of course you’re uncomfortable talking about an apartment that the overarching narrative immediately established as haunted, so what does your discomfort add to the story?  It feels as though the editors got the script out of order and accidentally inserted the rising action before the first twist but never bothered to fix it.  In doing so it feels like they wanted the readers to skip over all that boring narrative buildup designed to create tension, and instead leap directly into the heart of the scary stuff.  But horror doesn’t work that way.

Good horror is like a hot bath.  In order to get the most out of a horror story, you must structure things so that the audience has time to settle in and let the sinister and macabre seep into their very bones.  It takes time and effort, their discomfort and unease slowly building as they sink down further and further until they’re practically drowning in the nightmare, completely immersed and enthralled by it.  Neighbor, on the other hand, is a bath that can never quite figure out the right temperature and insists on turning on the hot and cold faucets at random intervals in the hopes that some sort of acceptable middle ground can be found before the metaphorical bather simply grabs a towel and leaves.

Shortly after Kae meets the big spooky ghostie, she also begins to develop a tentative friendship with one of her upstairs neighbors named Daigo, who is living in the building because his sister inhabited Kae’s old apartment before something *mysterious* drove her insane.  A-ha, says the reader, maybe now the investigation will get somewhere with two neighbors on the case!  But Daigo’s introduction proved to be the worst bit of plot development the VN could make, because I had to spend the rest of the story listening to Kae’s inner thoughts on how cute and young Daigo was.  You know, because obviously the perfect time to start crushing on a boy is when your physical health and sanity are slowly being chipped away at by a malevolent supernatural entity.

I’m not overtly opposed to romance in horror stories, provided that the romance knows its place and never tries to upstage the horror.  The Letter, for example, never lets the relationship between Luke and Hannah distract from the fact that their mansion was haunted af by something that wanted to kill everyone in the story.  The writers of Neighbor clearly went for a 50/50 split between Kae’s flirting and her being haunted, and it horrendously weakens both halves of the story.  I don’t particularly care if Kae’s face became flushed from Daigo standing too close when she was nearly disemboweled by a ghost in her dreams.  It’s like if someone decided to make a season of Friends where Ross and Rachel were still wavering back and forth on their relationship but now there’s a ghost down the hall who might want to murder Rachel.  Those two ideas don’t complement each other at all, and the novelty of the combination quickly wears off. 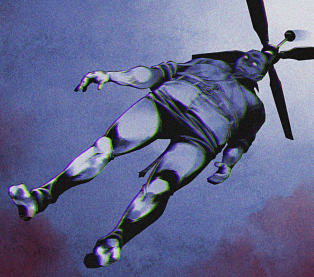 It’s particularly unfortunate that a romantic subplot was shoehorned in, because without that Neighbor had some pretty fantastic horror moments.  Seeing the hanged body of a crooked businessman just appear in his study as they’re investigating his old home was incredibly unsettling.  The apartment spirit appearing at random to pound on windows or have her face melt through the walls contributed to a fantastic atmosphere of fear and discomfort within the apartment, and when you realize exactly what was slithering across the floor it makes your stomach turn.

I wanted to like Neighbor.  It had all the trappings of horror that I look for in a good story: supernatural spirits, rules that the monster has to abide by, and ordinary characters who’ve stumbled into this mess on accident all in a tight 90 minutes.  But the entire narrative is dragged down by romance and tasteless comedic moments (e.g. the almost murdered by a ghost scene is within 10 minutes of a “hilarious” night out at a drag queen bar) and the horror was never allowed to stand at the forefront for more than a few minutes before our attention gets dragged back to how cute Daigo is.  The story even ends with, I’m not even kidding, the appeased spirit reappearing in her old apartment just long enough to give her blessing to Daigo and Kae’s budding romantic relationship.  That is the payoff you get: the message that this woman’s horrific murder was totally worth it in the end, because it brought these two idiots together.

Neighbor recently released on Steam.  If you’re looking for a horror VN you could do worse, but I wouldn’t recommend buying it unless you saw it go on sale.